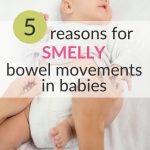 Does your baby’s poop smell bad? This can be due to a number of reasons – from what your baby eats to various illnesses.

Let’s go through some important reasons for smelly poop in babies, and what to do about it. 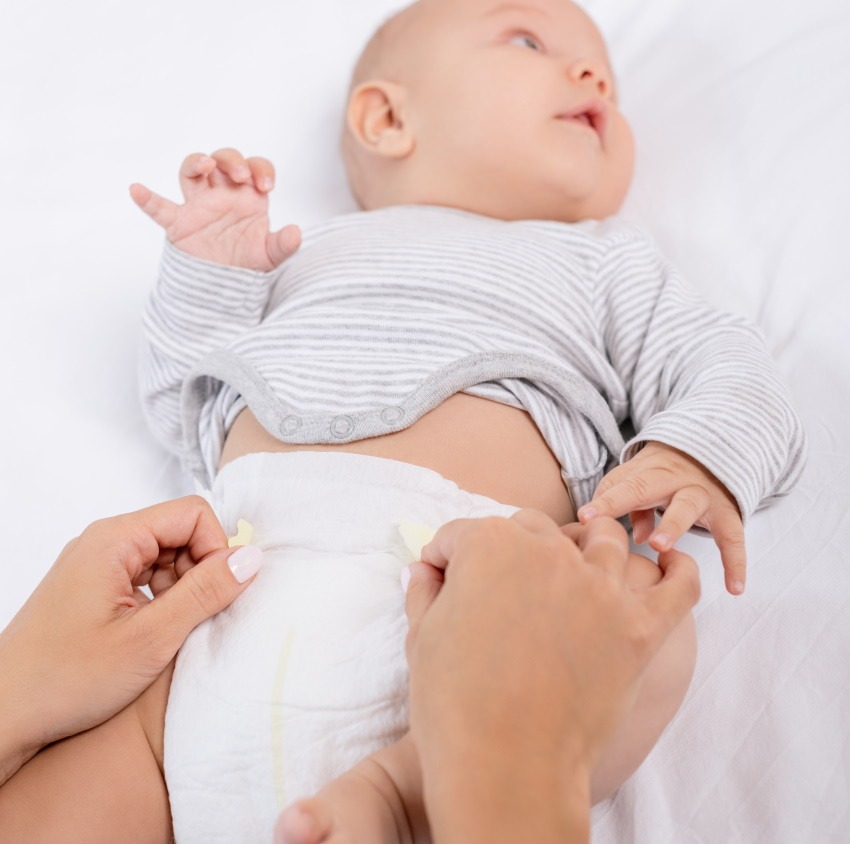 What are the reasons for really smelly bowel movements in babies? My baby’s poop smells really bad!

My daughter is 7.5 months old, she is on Similac formula, Nestle rice cereal, and Heinz baby food, and her stool is green, mucousy like and it smells really strong. I have never known a baby (which I have been around a lot of) to have this strong smell to their stool.

I was just wondering if this is something to cause concern or if it is a side effect of either her food formula or teething.

Reasons For Smelly Poop in Babies

The Normal Smell of Baby Poop

Breastfed babies usually have mushier and softer poop. They are less odorous, and are consistently soft for the first 6 months. The color of the poop ranges from mustard yellow to moss green.

Usually, a breastfed baby’s poop does not smell at all. This is because the breastmilk particles are so tiny that it is mostly absorbed in the gut. The ones that the babies pass out are essentially what is left of the digested milk. It does not stay long in the gut (that is why breastfed babies poop as frequently as they feed), hence they do not accumulate bacteria, decreasing the chances for it to smell.

On the other hand, formula-fed babies have more solid poop than breastfed babies. They smell a bit. This is because the particles in formula milk are bigger than breastmilk, hence they take a longer time to process. This causes the poop to stay longer in the gut and to pass longer. It sits in bacteria longer, hence the smell.

When starting with Solids

For babies on supplemental diet (started on solids), the poop will definitely smell more. As mentioned earlier, it will still depend on the baby’s diet. Food such as ginger, onions, garlic, vegetables, meat, and fruits contribute to the smell of the poop.

Poop naturally smells. However, there are occasions when the smell can be really bad and it can be caused by these factors:

As previously mentioned, babies who eat solids will have more odorous poop. Whatever they eat will contribute to the smell and consistency of their poop. Breastfed babies will pass less odorous poop than formula-fed or solids-fed babies.

A small study from 2001 (referenced below) found that the stools of formula-fed babies contained a lot more odor-causing sulfur gases than breast milk poop. When a baby starts eating solid foods, the feces will change, becoming more odorous.

Lactose intolerance is different from milk allergy. Milk allergy is allergy to cow’s milk. This is basically caused by the immune system reacting when there’s intake of cow’s milk. Other sources of milk can also cause an allergic reaction such as those coming from sheep or goat.

Lactose intolerance can cause bloating, gas, abdominal pain, and diarrhea. To diagnose this, your doctor will ask for your baby’s eating habits, and other pertinent medical and family history. A series for tests for lactose intolerance will also be conducted to confirm the diagnosis.

As for milk allergy, the symptoms include wheezing, itching or rashes, vomiting, swelling of eyes or lips. But do note that this can also cause abdominal symptoms such as abdominal cramps and diarrhea. Anaphylaxis or severe allergic reactions can occur with milk allergy. If this happens, bring your baby to the emergency room immediately.

There are alternatives for lactose intolerant babies, such as low lactose formulas, or lactose-free formula milk. As for milk allergy, breastmilk is still the best alternative for cow’s milk. Another alternative is hypoallergenic milk (i.e., casein or whey) or soy-based formula.

You can read more about lactose intolerance and milk protein allergy here.

Infections in the gut may cause foul-smelling poop. Some may even give off a distinct odor. These include bacterial, viral, and or parasitic infections:

Giardiasis is caused by a parasite that can be passed or transmitted from an infected person through fecal-oral route (anything that comes into contact with the hand and put into the mouth). Poor hygiene and sanitation can be a source and breeding place for giardia parasite. Symptoms include diarrhea, foul-smelling poop that are greasy and usually float in water.

Cholera is an acute diarrheal disease that is caused by a bacteria Vibrio Cholerae. This is usually contracted when a person ingests contaminated water or food. Symptoms include watery diarrhea, severe dehydration, and a distinct foul-smelling poop (fishy odor).

Salmonella is another diarrheal disease that comes from food contaminated with infected animal feces. Food that are not cooked properly are the common culprits. These include eggs, chicken (poultry), or beef, fruits and vegetables. Salmonella infection produces foul-smelling poop.

Escherichia coli infections can cause urinary tract infections, bacteremia or sepsis in infants. Symptoms include fever, vomiting, diarrhea, poor feeding, among others. Watery diarrhea is a common feature, sometimes becoming blood-streaked. There is no specific poop smell for E. coli infections.

Rotavirus causes a strong poop smell. Other symptoms include fever, nausea, and abdominal cramps. This is common in infants and can sometimes cause severe disease. This can be found in contaminated common surface areas such as toys, changing tables, door knobs, among others. Ingestion of contaminated food and water is also a common source of rotavirus.

However, this can be prevented early on in infancy. A 2-dose rotavirus vaccine is often given to babies less than 6 months of age.

This does not happen to all babies, but some babies tend to experience soft loose poop and poop smelled like vinegar when they are teething. There is no concrete evidence that establishes the connection of teething with the poop smell, however many parents agree that their babies’ stools suddenly smelled like vinegar just before one of their baby’s teeth erupted.

Babies who are breastfed usually produce sweet smelling poop, or like buttered popcorn.

This may indicate the duration of poop sitting in bacteria in the baby’s gut. The longer the poop stays in the large intestine, the longer the bacteria accumulate, causing a rotten egg smell to their poop.

Rotavirus is also known for its characteristic poop smell of rotten eggs.

Foul smelling poop can indicate infection such as cholera. As mentioned earlier, Cholera can cause other symptoms such as acute watery diarrhea and severe dehydration. Your doctor will ask for your baby’s medical history, and possibly travel and family history to diagnose this.

Other infections, as mentioned above, can also make the baby’s poop smell like fish.

When a baby’s poop smells like ammonia, it is most likely caused by a drenched, unchanged diaper full of poop and urine. Urine has ammonia and can cause a distinct smell when mixed with poop.

A dehydrated baby may pass out a faint metallic smelling poop. Dehydrated babies are usually lethargic or drowsy, with limp limbs. They may have sunken eyeballs and fontanels, and poor skin turgor. This warrants a trip to the emergency room when this happens.

When Should I Worry about the Baby’s Poop Smell?

A baby’s poop will undergo many changes as to its consistency, color, and smell. This is a reflection of the baby’s diet as he grows.

A sudden shift in the smell, a change in consistency (formed to watery), and frequency (more than the usual frequency of pooping), accompanied by other symptoms such as fever, irritability, change in feeding and level of consciousness are indicators of illness. Make sure to consult your doctor as soon as possible.

Moreover, babies have sensitive gut, so a good hygiene practice is necessary to eliminate any sources of infections. Always wash hands and clean common surface areas at home that your baby may frequently come in contact with. Be conscious and cautious on how to introduce new food and feeding techniques.

What’s your experience of smelly poop in babies? Join the discussion! :-)

Baby Gasps When Pooping and Makes Strange Squeaks – Why?

Baby Cries In Pain When Pooping Even When Loose Stools