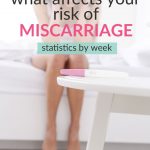 Are you possibly scanning the Internet for miscarriage statistics..?

The risk of miscarriage is a real worry in early pregnancy, but we need to remind ourselves that most pregnancies are successful.

I know firsthand how it feels to worry and look for miscarriage statistics to ease your mind… Why? Well, here’s my story:

After 6 months of trying, we finally conceived – only to miscarry in the fifth week of pregnancy. This was followed by a long and emotionally exhausting period of keeping track of ovulation, timing the lovemaking, BBT charting and hoping. It took another 9 months before we finally conceived again. I know that this is nothing compared to what many other couples go through, but it was still very tough.

When I finally got pregnant again, I was very worried that I would have another miscarriage. I don’t know how many hours I spent on the Internet looking for miscarriage statistics by the week of pregnancy.

When I experienced bleeding in week 8 of my pregnancy, I panicked. I called my midwife (I had my first prenatal visit scheduled a couple of weeks later) and she asked me to come in for an early ultrasound. I did and I got to see my baby. I saw her little heart beating and I saw the little embryo moving around. It was a fantastic feeling.

This little peek inside my womb helped me stop worrying somewhat, but I did continue counting the days until week 12 had passed. I also read and learned quite a bit about miscarriage.

If you are feeling anxious like I did, I’d like to help you save a few hours. I have gathered and compiled the  miscarriage statistics that I’ve been able to find.

At the bottom of the page, you’ll find references to research if you want to dig deeper.

If you are very worried about having a miscarriage, or if you already have had one, you can at least take some comfort in that research shows that there is no need to wait 6 months before trying again. You can start trying again almost immediately. You can read about this in this article about getting pregnant after miscarriage. At the bottom of that article, several moms and dads who have been through a miscarriage share their thoughts and feelings about it.

Now to the statistics!

How Common is it to Miscarry?

As you probably already know, since you are here reading this, miscarriage is quite common. Mayo Clinic estimates that some 10-20% of all known pregnancies end up in a miscarriage. Add to that all unknown pregnancies, and you will find much higher figures.

The tables below will show you estimates, according to various studies from as early as 3 completed pregnancy weeks; hence even including failed implantation.

Of course, as pregnancy tests become more certain early on, there will also be more confirmed miscarriages. Previously, some of these miscarriages were most likely interpreted simply as a late period.

Miscarriage Statistics By Week 3 And On

The Early High Percentage of Miscarriage and What It Means

According to these figures, the risk of miscarriage right after conception is very high, between 22% and 75%. This wide range reflects that different studies have found different rates of miscarriage.

It also reflects – and this is important – that the studies claiming up to a 75% risk of miscarriage include failed implantation. That is, your egg might very well have been fertilized, but for one reason or the other, it never implanted properly. Views certainly vary if this should even be called a miscarriage.

These very early miscarriages are sometimes referred to as chemical pregnancies, as in producing the pregnancy hormones, but not being viable pregnancies that could ever go full-term.

I guess my first pregnancy (and miscarriage) was a textbook example of a chemical pregnancy. Most women probably won’t even know that they were pregnant, but I knew since we actively tried to conceive and I was tracking my basal body temperature very closely.

If I were you, I would not fret too much over the terrible statistics for the first few weeks. The data is highly uncertain and if you do miscarriage,
i) chances are you won’t even know that you were (chemically) pregnant and

ii) it is likely that the miscarriage was due to chromosomal abnormalities that make your body stop the pregnancy.

Miscarriage Statistics After Pregnancy Has Been Confirmed

Looking at the data, now take a look at miscarriage risks after your pregnancy has been confirmed with a test. As you can see above, the risk really falls quickly, and especially so if a live embryo has been seen on ultrasound. An embryo that is alive in week 9 is highly likely to become a baby!

And even without knowing if the embryo is alive or not, you can rest assured that the likelihood that your baby is healthy and growing is increasing quickly day by day without bleeding.

Most miscarriages occur very early – even before a positive pregnancy test.

Over 80% or even 90% of all miscarriages occur during the first trimester – hence the focus to “wait until after week 12 to announce the pregnancy”. By then, the miscarriage risk is low.

The miscarriage statistics above all refer to a woman’s first miscarriage. How about the next one? And the next? Recurrent miscarriages are defined as having 3 or more consecutive miscarriages.

Only around 1% of all couples will have to endure this, while as many as 20-30 % of all women will knowingly experience a miscarriage (or even up to 75%, but without knowing, as seen in the table above.)

Out of the 1% of recurring miscarriages, 50% go unexplained.

Studies have also shown that the chances of having a successful pregnancy are about the same after the second and third miscarriage, but after that, the chances go down. It is still of course entirely possible, but after three miscarriages, couples are usually offered an examination to try to explain the miscarriages and possibly offer medication or other help.

Another factor that has been shown to affect the risk of miscarriage is the age of the parents-to-be.

The woman’s age is the most obvious here since there will come a time when her eggs simply can’t be fertilized anymore. But the man’s age actually plays a part too.

For a woman, the risk of miscarriage increases dramatically after age 37, with the steepest increase occurring after age 40. By age 45, less than 20% of all recognized pregnancies are viable.

The graph below is from a U.S. study of pregnancies conceived via IVF. The risk of miscarriage is a bit lower per age group in this study than in some other similar studies – probably because the stats are derived from women who successfully manage to become pregnant through IVF.

Not all women who undergo IVF have a successful egg retrieval. The embryos that are transferred to the woman’s womb are chosen because they appear to develop normally and hence the risk of miscarriage for these embryos is a bit lower. 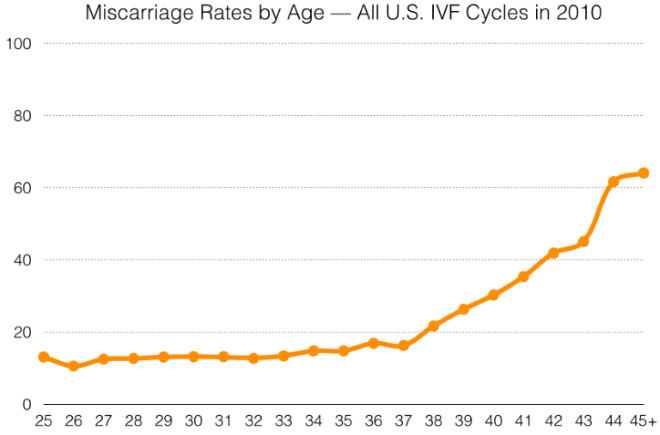 This all seems pretty dark is you are an “older” couple trying to conceive. Older as in approaching 35 years or older. However, it is not all dark. Once a fetal heartbeat has been confirmed, the risk of miscarriage is much more hopeful!

Other Factors that affect Pregnancy Outcome

Has this been a lot to digest? I bet! And to make the situation even more complicated, there are of course other factors than luck, age and earlier miscarriages that will affect your pregnancy outcome. Gladly, many of these factors are within your control.

Here are some factors that may increase your risk of miscarriage:

And controllable factors that reduce your risk of miscarriage:

So what is the conclusion of all this?

Miscarriages happen whether we worry or not. Most of the time, they don’t. Trying to let go of the worrying will make your life in early pregnancy happier and may even actually reduce the risk of miscarriage a little bit. (I know, A LOT easier said than done..!)

If you are very worried, ask for an early ultrasound scan. If you can hold out until the 8th week of pregnancy, a live embryo and no bleeding mean that the risk of miscarriage is down to 1.5% if you are younger than 35 years! I don’t have a figure to present for those older than 35 years, but a live embryo is likely to cut your risks very sharply too.

Remember that by the time you have a positive pregnancy test, the highest risk of miscarriage is already behind you. Isn’t that great to know? Also, unless you are experiencing bleeding, the risk is already down to below 10% at around the seventh week of pregnancy.

Don’t smoke, eat healthy foods, and try to focus on the positive aspects of life.

I hope you found this information on miscarriage statistics useful. Feel free to share any thoughts by leaving a comment below.

Read Next About Miscarriages