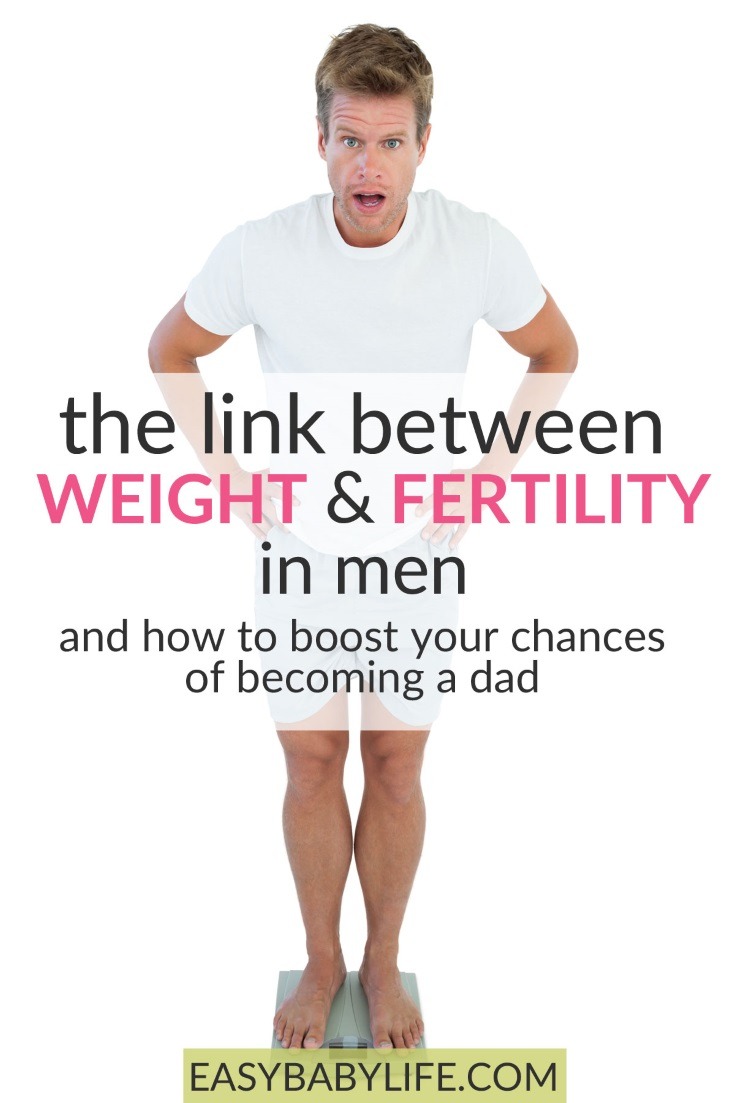 Research has found a link between weight and fertility in men. Lower sperm count or even no sperm production may be the result of being overweight.

You most likely know that obesity rates throughout much of the developed world are continuing to rise. In fact, it is estimated that a whopping 1.5 billion of us are currently overweight. Some of the effects of obesity on health are an increased risk of type 2 diabetes, heart disease and also fertility problems.

If you’ve read about fertility, you’ve probably heard that a woman’s body mass index (BMI) at the time of conception, and indeed throughout the entire pregnancy, is an important factor not only in successfully getting pregnant but also in maintaining fetal health.

What you probably haven’t read is that around 40 percent of fertility problems are actually down to the man – that’s equal to the percentage of fertility problems caused by female issues! (The remaining issues are either undefined or caused by both male and female issues in a relationship. While the link between weight and fertility in men is only one of many possible reasons for male infertility, it is certainly a cause that you can affect.

So men, listen up. If you’re partial to foods of the unhealthy variety and are noticing that you’ve had to go up a notch on the belt loop, then keep reading to find out about the link between weight and fertility in men.

Weight And Fertility In Men – The Facts & What To Do

Is There A Link Between Obesity And Infertility In Men?

There are a number of ways in which excess body fat can affect male fertility.

One very obvious explanation is simply that the added layers of fat provide the body with extra insulation. Think about it – when you’ve enjoyed all the abundant food and drink during the holidays and are carrying a little extra ‘holiday weight’, do you ever find that you sweat more while just carrying out your normal, everyday activities? That’s because the extra weight makes you warmer. When you’re carrying this additional weight around with you all the time, just think about what it’s doing to your ‘bits’.

Keeping the testicles cool is key when trying to conceive – the last thing you want is boil-in-the-bag sperm!

Another explanation for the link between weight and fertility in men is slightly more complex. You’ll be familiar with estrogen, the main female sex hormone, but did you know that men have this hormone too? The reproductive organs are the primary source of estrogen, but fat cells actually produce this hormone as well. Therefore, the more fat cells, the more estrogen. If men produce too much estrogen it can have a significant effect on fertility as it throws off the body’s natural hormonal balance, possibly affecting the health of the sperm.

Relatively few studies into the link between obesity and male fertility have been carried out, but most of those that have, demonstrate a definite correlation; certainly enough to make us think twice about eating that cheeseburger.

For example, a 2006 study of 42 participants found that overweight men had less sperm per ejaculate than men with a healthy BMI, while both a 2007 and 2009 study reported that obese participants produced less ejaculate in general than their healthier counterparts.

And the next generation too!

Perhaps the most worrying study to date showed a possible connection between an obese male and the fertility of both his offspring and their offspring after that. It’s important to note that research into this has, so far, only been conducted on mice, but could quite realistically also apply to humans. If there’s a chance we’re affecting the probability of having grandchildren and great-grandchildren, surely that’s a big enough incentive to shed a few pounds?

Don’t be tempted to take the weight loss too far, though. A study carried out in Denmark in 2004 showed that the sperm count of underweight men was equally as low as for obese participants.

What Weight To Aim For

So what is a healthy weight, then? Of course, that is quite individual, but using BMI (body mass index) will give you a hint. The problem with BMI is that you use weight rather than the amount of fat stored in your body for estimation. If you are a muscular guy, your BMI may be high even if you are not overweight at all.

But really, most of us will know of the BMI gives a reasonable indication of if our weight is healthy or not. By definition, a BMI below 19 means underweight, between 19 and 25 is considered normal weight and above 25 means that a person is overweight. Obesity starts at a BMI of 30.

Another option is to measure your waist circumference. For men, anything above 37 inches (94 cm) is likely to mean that you are storing an unhealthy amount of fat and that your BMI is above 25, which is defined as overweight. If your waist circumference is more than 40 inches (102 cm) your BMI may be higher than 30, meaning that you are obese. So aim for a BMI between 19 and 25 and a waistline below 37 inches (94 cm).

Not sure about your BMI? You can calculate it using this formula:

While striving for a normal, healthy weight should be your top priority for fertility if you are overweight or seriously underweight, it will not hurt to also include in your diet some of the foods known to increase male fertility.

Foods rich in zinc are thought to be essential for creating a healthy sperm tail, which of course is vital to allow those guys to travel quickly and efficiently towards the egg. The best sources of zinc are oysters (a well-known aphrodisiac so they’re also great for getting you ‘in the mood’!), lean beef and seeds such as sesame and pumpkin.

You can also try some foods high in Vitamin E. A study of men suffering from low sperm motility showed a 10 percent increase in the sperm being kicked into action following a diet of Vitamin E rich foods such as almonds, sunflower seeds and spices like paprika and chili.

If you want to more information and tips for getting pregnant, check out any of these books.

References for the link between weight and fertility in men

17 Tips For Getting Pregnant – Maximize Your Chances To Conceive

Attachment Parenting For Babies – Cuddle, Have Fun And Keep It Simple!