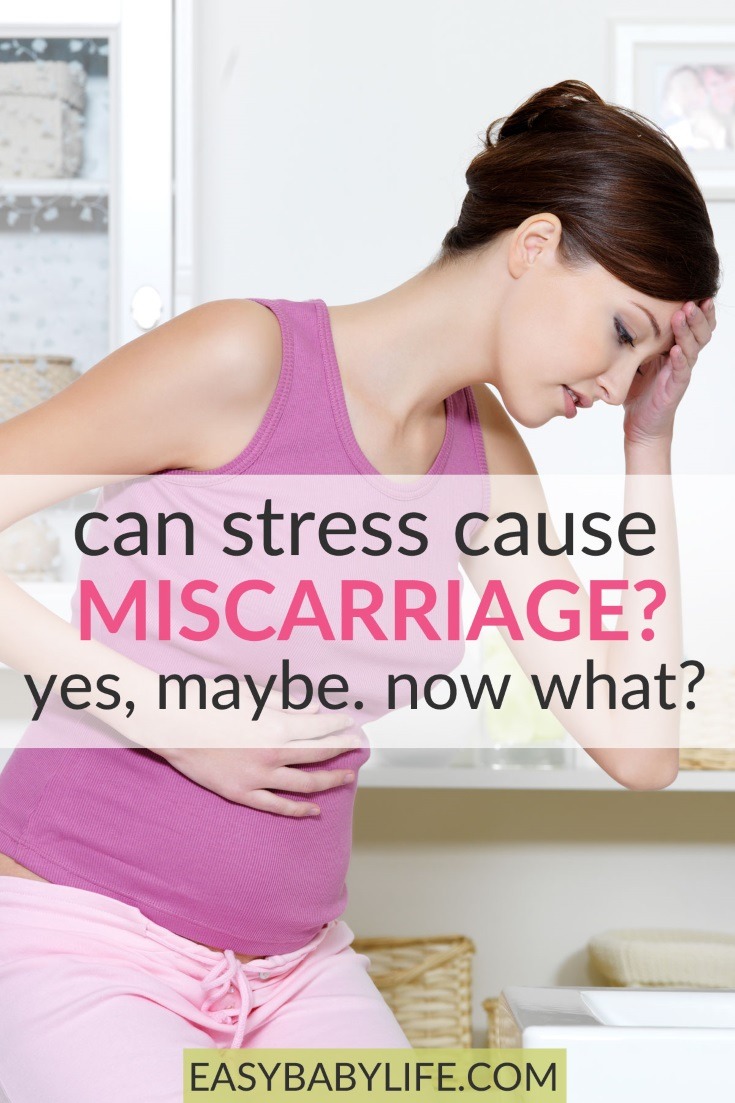 Can stress cause miscarriage..?

I don’t know about you, but this is definitely something I worried about especially the first time I was pregnant.

Whether you’re a first-time Mom-to-be, or already have an entire football team of children at home, the fear of miscarriage during pregnancy is immense.

Unfortunately, the loss of an unborn baby is far more common than you might think, with around 12% of the known pregnancies in the developed world being affected. If taking into account all very early miscarriage, happening before the woman even finds out that she is pregnant, the share of miscarriages is a lot higher.

You’ve probably heard of the ‘safe’ 12-week point; the end of the first trimester when women feel comfortable sharing the happy news of their pregnancy. This is the time when the risk of miscarriage reduces significantly.

Most first trimester miscarriages occur because of chromosomal problems with the baby, meaning that he or she would be unlikely to grow and develop in the womb as normal. By the 12 week point, the body has usually determined whether or not the baby is healthy.

However, although estimated three-quarters of miscarriages occur within those first three months, crossing over into the second trimester sadly doesn’t make your baby invincible, and losses, although much more uncommon, can occur right up until childbirth.

Can Stress Cause Miscarriage – Research And Implications

The Effects of Stress

As we’ve looked at, chromosomal problems are considered to be the primary cause of early miscarriage. Miscarriages can occur up to 22-23 weeks of pregnancy. A baby born from 23-24 weeks onwards has a chance of survival if born prematurely, so losses after this time are known as “stillbirths” and can be officially registered as deaths. These later miscarriages are thought to mainly be caused by underlying maternal medical conditions.

But what about stress?

Stress doesn’t tie into either of those categories. Can stress cause miscarriage? It’s certainly a topic that does the rounds in pregnancy circles quite frequently, so you may be surprised to hear that the official medical standpoint on this matter is that there is no link between miscarriage and maternal emotional well-being.

What is scientifically proven and medically acknowledged, however, is that emotional stress can cause physical symptoms. Looking at the matter in this way, doesn’t it seem like there’s a relatively good case for arguing that stress may be a risk factor with regard to miscarriage?

Researchers certainly think so, and many studies have been conducted to try and prove one way or another whether there is, in fact, a correlation between emotional pressure and pregnancy loss.

Is There A Link?

Although study after study has been carried out, results all vary rather significantly meaning that it’s impossible to know what to believe. Take a look at the three different studies on whether stress causes miscarriage or not and see what you think.

Cortisol Levels and Very Early Pregnancy Loss in Humans, a study published in a 2006 edition of PNAS, looked at specific hormone increases in relation to miscarriage.

Cortisol is a hormone that the body releases in response to stress. It increases blood sugar levels, giving us the energy needed to cope with whatever stressful situation we’ve found ourselves in.

Researchers measured cortisol levels in women who were around 5 weeks pregnant and found that participants with higher levels were far more likely to experience an early miscarriage. The study concluded that “evidence links increased levels in this stress marker with a higher risk of early pregnancy loss in humans”.

Another study, Relationship between psychological stress and recurrent miscarriage, concluded that there is a connection between stress levels and recurring miscarriages.

An earlier study, Does Stress Influence Early Pregnancy Loss, published in a 2003 Annals of Epidemiology journal, reported similar findings but was unable to prove a definite link due to one very large outside factor; smoking.

Over 300 pregnant women were involved in this study and although researchers discovered that the participants who ranked highly on medical-use stress scales (such as the Perceived Stress Scale – PSS) were more likely to experience early miscarriage, they also discovered that these women were also more likely to have smoked cigarettes or marijuana regularly both before and after conception.

Smoking has been medically proven to harm fetuses by limiting the amount of oxygen the baby receives.

So were the documented miscarriages due to the effects of stress or the effects of smoking? The evidence remains unclear. (A good reason to both work your stress level and any drug abuse including cigarettes!)

A study was published in a 1998 edition of Human Reproduction titled Stress and Anxiety do not Result in Pregnancy Wastage. The title says it all really. Like the study above, a medical-use stress scale was used (this time, the STAI scale) but findings indicated that there was no significant difference in early pregnancy loss figures between those participants who scored high on the scale and those who scored low.

Interestingly, they also found that cortisol levels did not correspond to levels of stress determined by the STAI scale.

So is it possible that participants communicated an inaccurate level of stress, and cortisol could indeed be a miscarriage risk factor? Again, with all these questions it remains unclear.

What About Premature Labor?

A baby is officially born prematurely if he or she makes their way into the world anywhere between 23 and 37 weeks of pregnancy. Medically speaking, the same “rules” apply to this as with miscarriages; the official standpoint is that stress does not contribute to premature birth risk factors.

But is that true? A 2003 study examining this looked at the stress levels of around 2000 pregnant women during their pregnancies. Of the participants who delivered their babies earlier than 37 weeks, the majority of them had been assessed as having high prenatal anxiety.

There are some flaws to the research, however, in that medical conditions which are proven to induce early labor (such as preeclampsia) were not taken into account.

Minimizing The Risk of Miscarriage due to Stress

If you want to reduce the amount of stress you experience during pregnancy, the most important thing is to identify the source of the stress. Are you worried about the pregnancy? Or finances? Or work?

One thing that may cause a lot of pressure during pregnancy, especially during the third trimester when you’re weighed down with a bowling ball stomach and sandbag boobs, is not having the energy to keep up with your usual routine. This is completely normal!

You’re not the first, and you certainly won’t be the last. Pregnancy takes a huge toll on the body and, as much as you’d like to think you are, you are not Super Woman! (Or, well, you are, but even Super Woman needs a break!)

So start taking things a little easier. Have a lie-in, ask your partner to get up on a Saturday with the kids, and go out for dinner for a change.

If you fancy trying something a bit different, complementary therapies have actually proven to be very effective (and, most importantly, safe!) during pregnancy. Many spas and health farms offer options especially designed for Moms-to-be. Reflexology, acupuncture, and yoga are some of the most popular choices.

And if you’d rather stay in the comfort of your own home, ask your partner to give you a soothing massage, or light some fragranced candles for a little aromatherapy.

Also, remember that it is highly unlikely that a little bit of stress or worrying (about miscarriage for example) is likely to be enough to trigger a miscarriage. In such a case, the human race would be extinct since long.

We are all different, but as long as you don’t have major stress in your life and do nothing about it the probability that stress will cause a miscarriage for you is most likely very low.

So, Can Stress Cause Miscarriage or Not – Final Thoughts

So can stress cause miscarriage? The truth is, we just don’t know if there is a direct link. Although some research does sway that way, there seem to be too many flaws and oversights to be able to draw a definite conclusion.

However, what we do know for sure is that the effects of stress are very detrimental to the body. Now don’t get me wrong, a little bit of stress in certain situations is good for us. The chemicals released in stressful situations provide us with what we need to get through. But generally speaking, stress can not only be a gateway to depression and eating disorders but also have negative physical effects on the body.

Taking this into account, it would be irresponsible to completely rule out stress as a risk factor for miscarriage. And if stress cause miscarriage and YOU feel stressed – it is time to reread the section above on how to minimize stress during pregnancy!

Read Next On Miscarriages