I can best sum up my birth story by saying that it is very similar to climbing Mount Everest. Horrible until you get to the top and then euphoric afterwards. One thing is for sure – giving birth is nothing like TV! 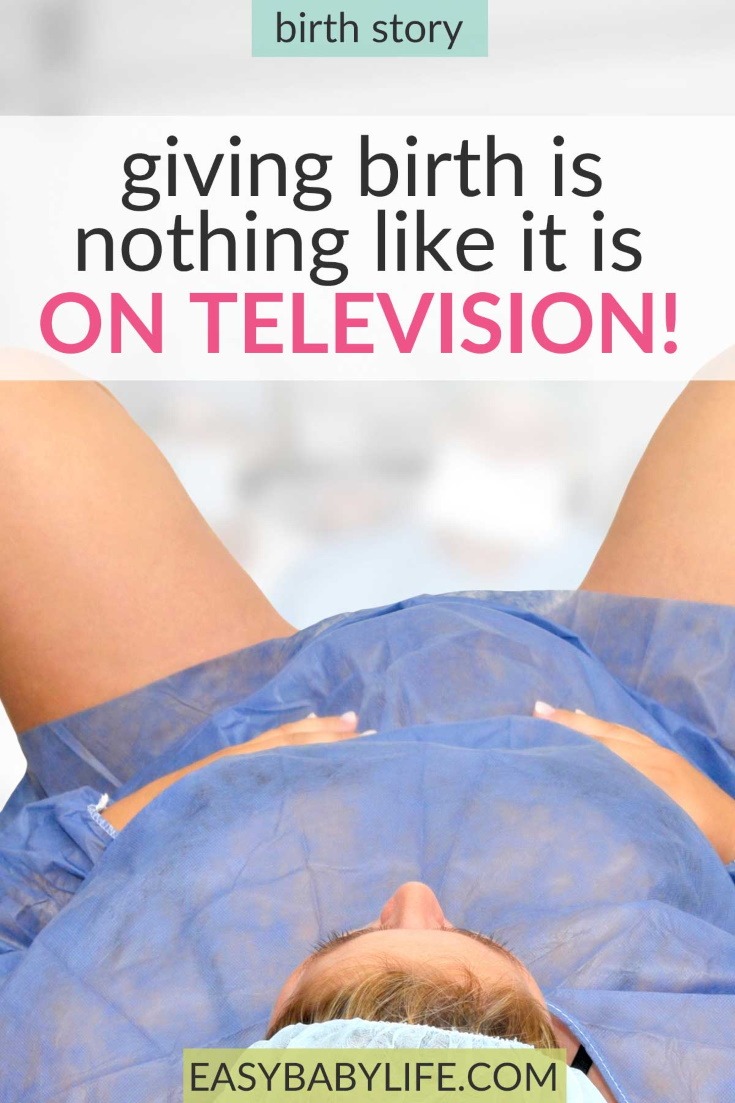 Giving Birth is Nothing Like TV. Here’s My Story!

Informed that I had to be Medically Induced

I gave birth last year at Morristown Memorial Hospital in NJ. Originally, my due date was the 15th (my youngest brother’s birthday) but due to concerns about pre-eclampsia, I was induced ten days early. My sweet daughter was born on my sister’s birthday, the 6th.

My doctor had called me that morning and told me to show up at the hospital at 10 that night. My husband and I had just moved barely a week ago and I was under the impression that the first children came late. So it was with a sense of shock that I relayed the message to my husband. I needed those 10 days, darn it!

After I got used to the shock (it grew, did not diminish throughout the day), my first thoughts were to make sure that I had enough food in my stomach to get through labor.

I extracted a promise from my husband to take me out to an Italian restaurant to load up on carbs to get me through the starvation that the hospital was sure to enforce.

It was to go to waste since one of the first things I did upon arriving and being placed on several IV lines full of meds was to throw up my chicken. I vomited several times and they eventually cut off my supply of ice chips.

The pre-eclampsia medicines made me very hazy and drained my dwindling store of energy. They gave me an oxygen mask which made my mouth intensely dry.

I kept dreaming of all the icey juice cups I would drink after giving birth. I put off the epidural until it came time for them to break my water. Up until that point, I had been able to handle the contractions with only a minimum of pain medication but the cervical exams were excruciating.

Then It Got Intense

Breaking my water manually would be even more painful so I did the epidural. It took the second time. By then, the contractions were rolling over me like huge waves and the pain engulfed me. I had my husband crush my hand whenever one came on because I was too exhausted to even squeeze his hand.

Now, I had allowed my husband in the room with me under the supposition that he would stay by my head and not go wandering off to the sheeted area.

Well, I found out that the courtesy sheet that you see during birth scenes on television was not the routine thing I had thought it was. Giving birth is NOTHING like TV!

With no energy to protest, I gave myself up to the pain (yes, with both epidurals!) and embarrassment of being so exposed and tried to focus on pushing. I couldn’t do it!

My baby’s heart rate was declining and I could barely follow what the doctor was telling me. So after my last feeble attempt at pushing, he performed an episiotomy and grabbed the vacuum to suction the baby out of me.

The only thing I didn’t really feel was the episiotomy and the stitching afterward but by then my baby had grabbed all of my attention.

And There Was My Baby!

At 6lbs, 1oz, Emily was a teeny little baby without lashes or eyebrows. So small compared to the large 8 pounder I was expecting. (She has since more than made up for being so small. It was actually very thoughtful of her to wait until after she came out to have her growth spurts).

My husband and I fell in love just looking at this tiny mystery who just a day before had confounded us by hiccuping for hours in my belly.

I can best sum up my birth story by saying that it is very similar to climbing Mount Everest. Horrible until you get to the top and then euphoric afterward. One thing is for sure – giving birth is nothing like TV!

The best and worst experience of my life.

Thanks for reading,
Jolyn

Do you agree with Jolyn that giving birth is nothing like TV..? Let’s hear your views and experiences below! :-)

My Birth Story from 1965 – Thank God for General Anesthesia

Premature Birth In Week 27 – Terrifying But A Gift Of God