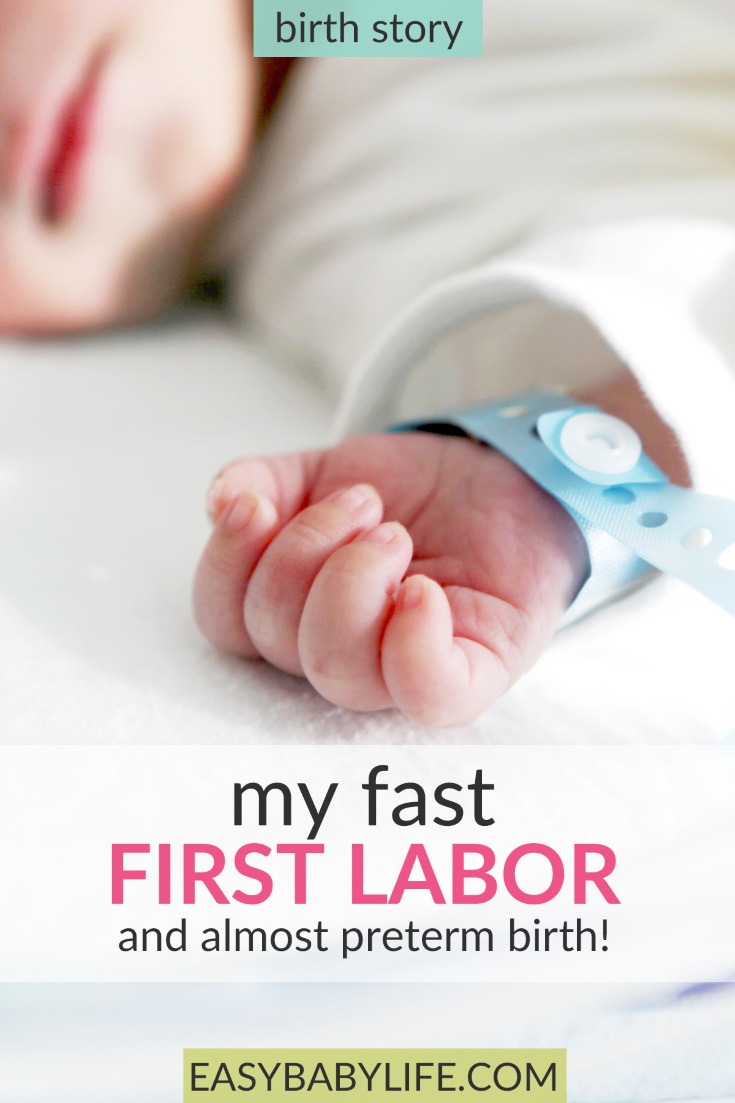 While I was pregnant with my first, I obsessively researched everything I possibly could. I still almost gave birth in week 32 and had a very fast first labor.

Preparing to Give Birth

While I was pregnant with my first, I obsessively researched everything I possibly could. I even attended prenatal classes and discussed EVERYTHING with my husband. My family is very close so having aunts, cousins, and my mom telling me all about their experience and all was always great to hear.

I always had it in my mind that I would have an epidural and have a normal vaginal birth that would take about 6-8 hours since that was the average for most of the women in my family.

Never did I expect so much trouble and such fast first labor!

At 32 weeks I went into preterm labor. SCARY!

I felt that something wasn’t right and I kept having Braxton Hicks contractions. There were a lot but since they were irregular, I didn’t think much of it. It was the pink discharge and slight back pain that made me feel uneasy.

I went to an after-hours clinic to get checked and put my mind at ease. This is when they informed me that I was fully effaced and 2cm dilated, which meant that I was in active labor.

Conveniently, the hospital where I was planned to give birth was just across the street. Once I arrived at Triage, they put me in a birth room, hooked me up to an IV, stabbed me in the butt with a steroid to help baby’s lungs develop faster in case of birth before 34 weeks and explained all the risks that could occur if I was to give birth then.

After a few hours, the contractions subsided and “labor” stopped. Or put on “Pause” as I like to call it. I stayed in the hospital for further observations (4 days) until they thought it safe enough to go home.

I was put on bed rest until I would ready, at 37 weeks. After that, I would be allowed to resume normal activity.

Week 37. Since I was now considered High-Risk Pregnancy, I was scheduled for weekly check-ups (this included, ultrasound, fetal and my heart rates, and urine test). My last check-up had fallen on my week 37 to the day.

I noticed some pink discharge in the morning but was warned in previous check-ups that it was normal to spot in later pregnancy, especially around the 37 weeks mark and beyond.

I was at the hospital since 10:00 starting with the blood test. Once that was done, I had to wait for results so in the meantime, I had the urine test and heart rates done.

Blood tests were taking a longer than usual time to arrive and there was extra protein in my urine which concerned the nurses and the attending physician.

My doctor wasn’t working at the hospital that day so they had to call him at his office to see if I should stay in the hospital for more testing/monitoring or can go home.

I waited 2 hours and that’s when the nurses told me I could go get something to eat and then return. An hour later I returned only to be forced to wait yet another hour and a half before they were able to reach my doctor. By 2:30 I was able to go home. FINALLY!

I got home and was very eager for a nap. I told my husband about my day at the hospital and then we prepared for a nice relaxing nap. At around 3:00, while I was lying there, I couldn’t stop fidgeting and moving around. My back was sore and I just couldn’t get comfortable. Then my back started hurting more.

I figured that was just from sitting around on uncomfortable chairs all day and being tired. Then I started noticing more contractions but again, irregular. 1, then the second at 9 minutes then the 3rd at 7 minutes then the forth at 10… it jumped around too much to think it was real labor. I still made my husband record my contractions, just in case.

Suddenly (around 4:00), my contractions jumped to 3 minutes apart and quite consistent. To the point that my husband was telling me when I was starting my next one before I could tell him myself. The pain was increasing with each contraction.

During my contractions, I felt like I was out of touch with reality. Everything became a blur, I couldn’t understand or listen to anything or anyone, couldn’t speak or concentrate on anything. My mind was out and pain took over everything.

Once the contraction passed, I was normal again and could describe what I was feeling. 4:45, got my husband to call the hospital, I told him everything so that he could tell the nurses at the hospital for me.

He told them exactly what I was saying and yet, they still wanted to talk to me. I spoke to one nurse and while I was telling her the same thing my husband just had, my speech became impaired again and a contraction was coming. The nurse noticed and asked if I was having a contraction? I said yes and suddenly dropped the phone and road through the contraction.

I picked the phone back off the floor afterward and the nurse said, “ok, come to the hospital now, we will get a room ready“. The 7-minute drive felt like forever, not to mention the 5 pm traffic…

To the Hospital and My Fast First Labor

I arrived to triage and before even being admitted, I said I wanted an epidural NOW. They laughed and said they would check me out first. They got the room ready and after all admission paperwork and birthing questioning, they put me on the bed and checked my cervix, 5cm dilated.

OK, epidural on the way. Now 6:00, they suggested I go in the bathtub to help relax my muscles and ease the pain while I waited for the anesthesiologist to arrive.

After an hour (now 7:00) in the tub, I felt like pushing. I told my husband and he went to get the nurse.

The nurse came in and I told her I feel like pushing into my contractions. She laughed a bit and said it was too early. The anesthesiologist still hadn’t arrived but was coming down the hall. They decided to let me out of the water and do another cervix check. OK, 10CM! TIME TO PUSH!!!!

They said, sorry honey, no epidural no time for that now. I felt terror in my eyes and turn to my husband for answers. He looked at me and said, “it’s ok honey, you can do this“. Yeah, easy for him to say…

So pushing had to start. I used some oxygen to help me with my breathing since my breathing was so shallow that not enough oxygen was going through my body and was causing my extremities (hands, legs) to go numb. I pushed for an hour and by 8:14 pm, the baby was born. A BOY weighing a whole 6lbs 3oz.

So from first contractions to my baby was born, it took around 4 hours. I guess my body had practiced since week 32, haha. But it surely was fast first labor!

To be honest, the pain feels like someone has taken a grab at your tail bone and is ripping it out towards them. While the head was crowning, I felt as though my vagina was extremely dry and needed lube. Of course, it was quite moist and lubricated but yet with the skin being stretched it feels dry and burning.

Also, something that most people don’t tell you is, during delivery, it feels like the baby is coming out of your butt. It feels like you are pushing a BIG poop. This might be why most women fear passing bowels during labor (which can happen but isn’t likely).

Once the baby is out you instantly feel relief. Then, about 20 minutes later, I gave birth to the placenta, which felt like a warm wet fish coming out. hahaha…

Once the baby was weighed and everything, they asked me if I wanted to hold him. I was surprised that I did not. I told my husband to have him first. I never thought I would feel that way. I thought I would want him the second he was out.

The thing is, I was so incredibly weak that I had no energy at all to even lift my own arm. I needed rest and sleep. They gave me about 20 minutes of rest before moving me into recovery.

Once there, I had a bit more energy and was happy to meet my baby boy. I stared at him for a long time and smiled. I still look at him the same way sometimes even now that he is over 2 years old.

As you can see, this was a very fast first labor. Just a few hours. Now I am pregnant again…

I will have another story for you when the time comes.

Good luck to all the moms or moms-to-be reading this. I hope I helped by providing more information that you don’t often get from books or that most people just forget about.

I made an effort to remember every detail of my fast first labor in order to tell people who want to know as much as I did.

How about you – have you had or do you have reasons to expect fast first labor? Share your thoughts or comments below!

My Birth Story of Water Breaking at the Restaurant!