Here is my crazy acute C-section birth story… You won’t believe it. Sometimes life really is like a sitcom! 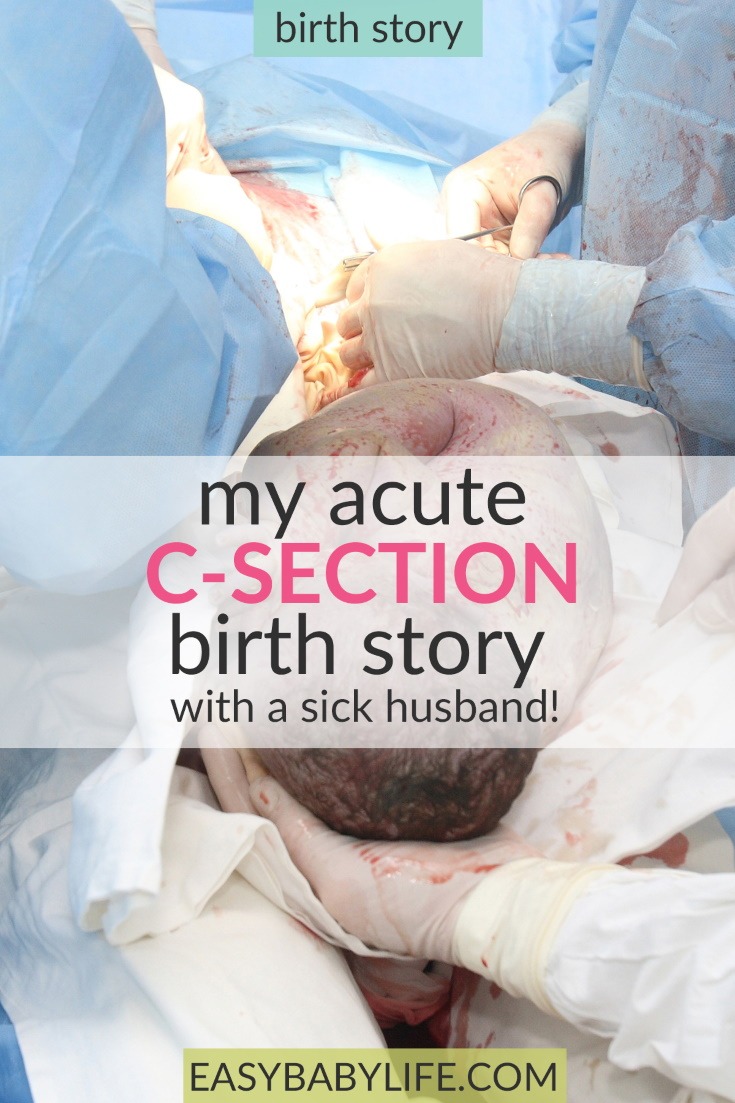 My Acute C-Section Birth Story – The Biggest Problem Was My Hubby!

Labor Starts But my Baby Won’t Come Out

My first pregnancy was pretty normal. Better than normal by most standards, probably. Except for some swollen feet, I felt great. I went into labor 2 days before the due date and looked forward to meeting my daughter, Chloe.

After 21 hours of labor, including an hour and a half of pushing, my doctor told me the best bet was an acute c-section. I wasn’t surprised.

Pushing is hard work and my daughter (who’s head was in the 90th percentile until she was 6 months old) just wasn’t coming out the old fashioned way. So off to the operating room my husband, Jim, and I went!

Off to an Acute C-Section

They strapped me to the table, got the lights and curtain in place, and finally brought Jim in to sit by my side.

As he sat down he said, “My stomach is really bothering me.” Knowing that he has IBS, I blew it off and either that or just plain old nerves. It was our first child, after all, and he was watching his wife about to be operated on. Then when he mentioned it again a minute late, I couldn’t help but think he was stealing my thunder.

“I’m sorry, but I’m about to have a baby! Your tummy problems can wait.” I think I actually rolled my eyes at one point.

A few minutes later we heard what every new parent can’t wait to hear. Your baby’s cry! It was amazing!

Jim was able to cut the umbilical cord at the warming table even though it was a c-section and he came with me to recovery while Chloe went to the nursery.

Then the Trouble Started (With my Husband!)

While in recovery, Jim again complained of his stomach bothering him, and again I told him to relax. He asked the nurse for a chair and all I could think was, “I just had a baby and his belly hurts! Boohoo! Suck it up!”

Jim spent the night on the most uncomfortable cot ever made and could barely sleep. With his stomach bothering him and having to change all the diapers since I couldn’t get out of bed, he only got a couple of hours of sleep.

The following day he went home to shower and nap and didn’t come back until after dinner. He took care of Chloe while I had dinner and at 9:00 that night walked himself across the hospital to the emergency room. That’s right. The EMERGENCY ROOM.

A few hours later he called me and said he was being admitted with appendicitis and was going to have surgery the following day! Okay, I felt a little bad thinking all those bad thoughts since he actually had a major issue.

And the Trouble Continued…

The story doesn’t end there. The next morning he had the surgery but didn’t look all that great. I would waddle across the hospital to visit him, although I couldn’t bring the baby. We were the talk of the hospital. Everyone had heard our story within a day or two.

When it came time for Chloe and me to go home, we got the news that Jim wasn’t going to be going with us. He had some complications and infections and would be staying “a few more days.” So rather than go home, Chloe and I went to my parent’s house.

Flash forward TWO WEEKS and Jim still wasn’t home. He had to have drains put in for the infections (which was a nightmare in itself) and was on a liquid diet. He wasn’t home for our 2 year wedding anniversary and missed out on those first nights waking up in the middle of the night and learning about Chloe in those early days.

I brought her to visit as much as possible but he was miserable. He lost 20 lbs, couldn’t eat anything, could barely walk. It was a disaster.

It Was Tough But Went Well

After just over two weeks I brought him home and essentially cared for our newborn and him while recovering from my own surgery. He was home for 6 of my 8 weeks of maternity leave. It was nice to have the company, but I’m not going to lie, it was tough with basically no income for all that time.

To this day, 3 years later, we don’t talk much about Chloe’s birth story. It seems like a bad dream or a sitcom.

Everyone joked when I was pregnant with our second daughter that Jim should get a physical before she was born (which I seriously contemplated scheduling). But things for that birth went off without a hitch and now we’re a happy, and HEALTHY family of 4.

Thanks for reading! This is the first time I ever wrote down my acute c-section birth story… The actual c-section was like a complete breeze compared to all the rest!

Have you had a C-section or plan to? Please share your thoughts below! You can also contribute your own birth story here.