Frequent bowel movements in babies that have started with solid foods are often diet-related. Track the reasons and find out what to do here! 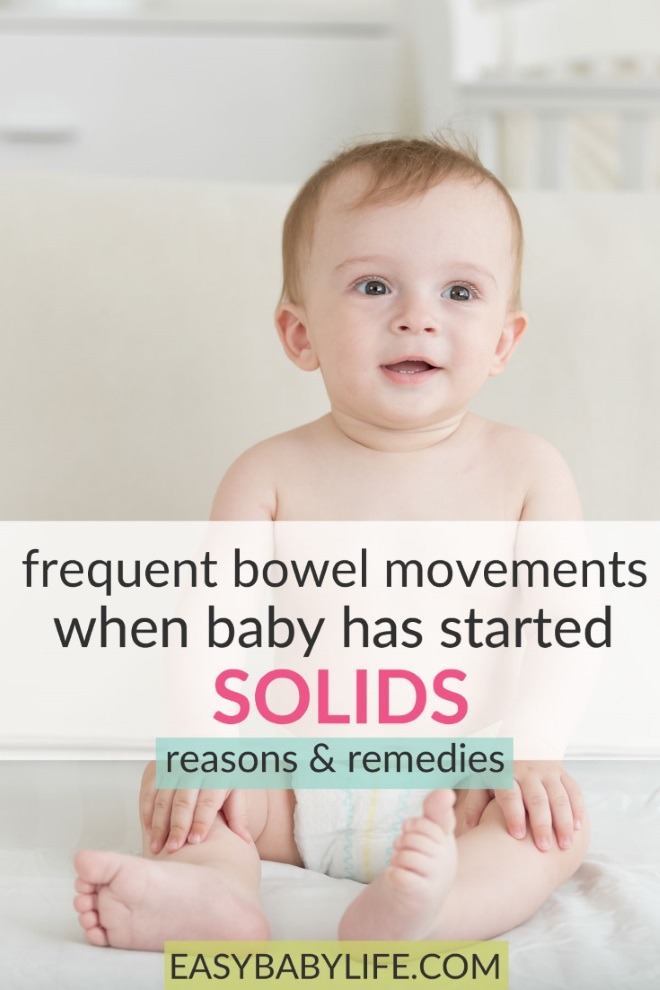 Mom’s Question:
My 10-month-old baby has frequent bowel movements: 5-6 times per day. He has no fever and appears happy. Is this normal?

I am afraid he is not gaining any weight because of the frequency in the bowel movement. Could that be the case?

Actually, when a baby has frequent bowel movements, (5-6 bowel movements per day), and your baby is so “old”, it does not seem completely right, at least not if it is a sudden change compared to his usual bowel movement habits. Are the stools hard or too soft?

Here are some possible reasons for frequent bowel movements in babies and what to do about it:

Too much or too little fiber in baby’s foods

If your baby is not ill and the stools are very soft or semi-liquid, as you say, the most common reason that I know of is too much fiber in the foods.

It is very easy to give babies too much fiber-rich food because we all know that these are more healthy in general. But babies’ tummies can’t handle too much fiber, and instead, they get diarrhea or at least very soft and frequent bowel movements.

Is he getting whole-grain bread, cereal or some other fiber-rich foods? In such a case, cut down completely on those foods, and you are likely to see an improvement within days.

If the poop is very hard and therefore frequent, he is, of course, more likely to be somewhat constipated and instead more fiber-rich foods will help him.

You can find many ideas on fiber-rich foods in this post.

Another reason for his frequent bowel movements could be some food intolerance.

The baby may be allergic to certain milk proteins (think if you have introduced dairy recently?) or have a celiac disease, which is defined as wheat protein hypersensitivity (Have you introduced grains?).

Think back to when it started and see if you can find a connection with the introduction of some type of food. Then try excluding it from his diet and see if it helps.

Babies can also sometimes have frequent bowel movements while teething because they drool a lot and swallow the saliva, which works as a mild laxative for them. (For more baby teething symptoms, read this article.)

Finally, our baby can, of course, be ill, like with a mild form of stomach bug, or if your baby was ill recently, his stomach can be a bit out of order. Baby probiotics can then be of great help. (Link to Amazon)

If nothing helps, you might want to contact his health care provider, to rule out any bacteria or similar.

Regarding the risk of dehydration and not gaining weight; keep a track of his wet diapers. If he is peeing frequently, he is not likely to be dehydrated. Offer him some water or formula often.

And if he is happy and full of energy, he is probably getting the nutrition he needs too; any person becomes quite cranky from getting too little food.

If your baby is not gaining weight properly, often has respiratory infections and his stools are foul-smelling, checking him for cystic fibrosis may be a good idea.

This is a very unlikely situation, especially since your child only presents with frequent stools, which may be caused by many other reasons, but since cystic fibrosis is a serious disease with vague symptoms, it is better to be sure. If he is gaining weight normally, you should not worry about this at all.

When Pooping is Difficult For Preemies? Reasons & Remedies

White Stuff In Baby’s Mouth – What Can It Be?