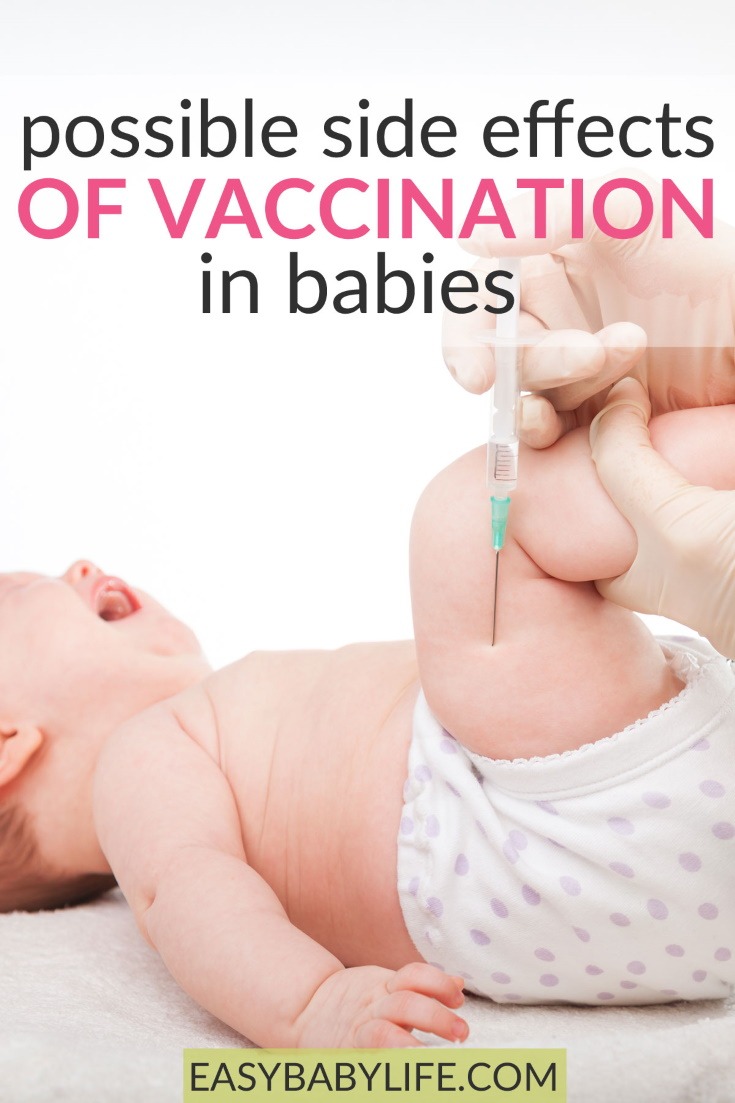 My baby has a small knot in his leg after the vaccine, it showed up after his 4-month shots. It has been 2 weeks since he had them (vaccines) and the knot is still there. Why is this and is it common? Should I take him to the doctor?

What other vaccination side effects are there? Is there something else I should look for?

Vaccination Side Effects in Babies, Mitigation and Red Flags

A Knot in Leg After Vaccine – Normal?

Let’s first talk about the specific side effect you are worried about; a knot in your baby’s leg after the vaccination.

The majority of vaccines are injected into a muscle. Under the age of two, the anterior thigh is the most common location. Sometimes, an area of inflammation develops within the muscle that feels like a “lump” or “knot” within two to three days. It is not painful and goes unnoticed unless the area is massaged. Skin redness and swelling are absent.

Clinically, this reaction is commonly seen following a DTaP or PCV vaccine. It is normal, expected, and usually self-resolves over the course of a few weeks, but can remain for months.

Applying a warm compress and massaging the “lump” can help reduce the timeframe of its resolution.

Other Common Side Effects After Vaccination Shots

A knot or lump in the leg after vaccination is just one of all possible side effects.

As part of the immune-boosting process, it is possible for infants and toddlers to experience mild side effects from the vaccines they receive. Except for live vaccines, most reactions self-resolve 24 to 48 hours after the time of administration.

As stated above, your baby may be extra sleepy after the shots. One of my babies got very sleepy after her shots, and actually slept through the night for a change! :-)

Our youngest wasn’t at all as affected. It is very individual.

MMR and VAR vaccine side effects

The reactions following the MMR and varicella vaccines differ because they are live vaccines.  They are also administered into the subcutaneous fat instead of muscle.

Symptoms may not develop until one to two weeks post-administration and can include a mild rash (source).

The rash following the MMR vaccination may cover your child from head to toe or just present at the torso. It will look like small red bumps and should self-resolve within one week. The rash is not contagious and should not bother your child.

The VAR vaccination can result in a rash that looks like mild chickenpox. This too should not bother your child.

Following the oral live rotavirus vaccine, fever, vomiting, and diarrhea are rare but possible (source).  If a vomiting episode occurs at the time of vaccine administration, the dose does not need to be re-administered.

Some studies have shown a small increased risk of intussusception (a type of bowel blockage) within a week after the first or second dose of the rotavirus vaccine. The additional risk is estimated to range from about 1 in 20,000 to 1 in 100,000 US infants who get the rotavirus vaccine, so it is not something to worry about. However, if your baby appears to have stomach pain, severe crying, vomiting, and possibly blood in their stools, you should call a doctor immediately or take your baby to the hospital.

How to mitigate the vaccination side effects in babies

If your infant or toddler seems uncomfortable or has a fever after receiving a vaccine, acetaminophen is most commonly recommended (source).

If there is tenderness at the site of vaccine administration, warm compresses and massages can be helpful.  Some relief of symptoms should be evident after using these remedies.  If not, you should call your doctor.

Vaccination Side Effects – When to Call the Doctor?

Abnormal symptoms following a vaccine include the following (source):

If any of these symptoms develop, emergency medical intervention is warranted.

One side effect of the DtaP, as well as the MMR that was earlier feared, was autism. This connection, however, is by now quite well researched and highly disputed and not something to fear.

If you are worried about your baby’s psychological development (although unrelated to vaccines), you can read about signs of autism in babies and toddlers here.

For a pedagogic overview of vaccinations, what their benefits are, and their possible side effects, view this video:

I hope this helps,
Paula

So, how about all other babies..? Has anyone found a knot in the leg after the vaccine or any other side effects worth noting? Share by leaving a comment!

How To Use Cloth Diapers – 4 Tips To Get Started

Newborn Baby Appearance: 10 Reasons Why They Look So Funny!

Baby’s Umbilical Cord Stump: How To Care For It (It’s Easy!)