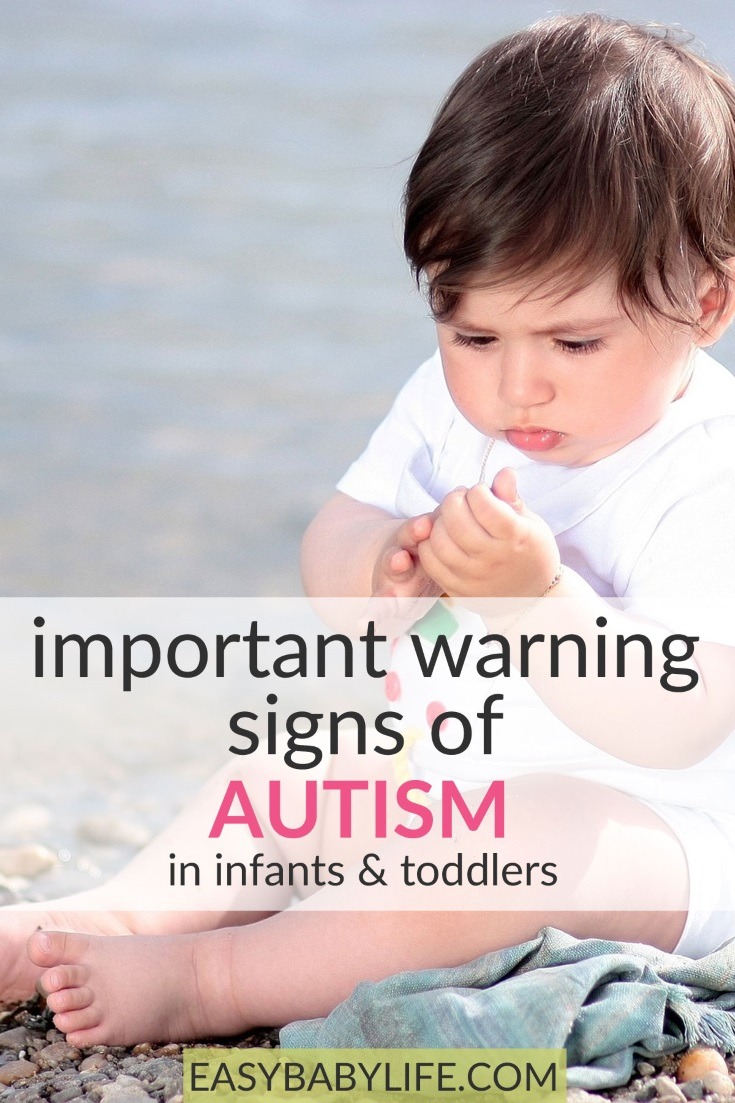 Are you worried that your child’s behavior fits within the warning signs of autism in babies and toddlers? Well, great that you are here! Taking early behavioral signs seriously can make a huge difference to your baby’s development if it turns out that something isn’t quite right.


Many years ago, I was at a dinner party with friends. Their gorgeous 2.5-year-old son was running around without any stops, and one of the guests commented that “he is so cute, running around like a little robot“.

A few months later I learned that just the day before that dinner party, the boy had been diagnosed with Autism. I can’t even imagine how painful that innocent Robot comment must have been for the parents!

This dinner party was over 10 years ago. At that time, at least I didn’t hear about children being diagnosed with Autism very often. Today, several research studies indicate that the diagnosis of Autism Spectrum Disorder (ASD) has exploded in the last five to ten years, and now parents are worried that perhaps their child falls somewhere on the spectrum. Certainly, the vast majority of children will not ever be diagnosed with ASD, and worrying about one or two “odd” behaviors or being late with some milestones, is just not going to make anyone happy.

But, early intervention has been proven effective in alleviating symptoms of Autism and providing children with ASD necessary language, social and academic skills. The sooner a diagnosis is made, the sooner intervention can begin. So, ignoring obvious warning signs of autism will not be helpful either!

So what are Autism and ASD?

Autism is a spectrum disorder that encompasses a range of signs and symptoms, unique to each child that has it. Most children with ASD have developmental problems with verbal and non-verbal communication, relating to others and their environment, and being flexible with thought and behavior.

The causes of ASD (because there is no single cause) are to a large extent unknown. Researchers say “a combination of genetics and environmental factors may play a role.” May play a role. Like in “We don’t know”. Frustrating for sure.

What is known and observed are a number of risk factors:

Warning Signs of Autism Spectrum Disorder to look for

Each child develops at a different pace so it is difficult to determine when a child will learn a particular skill but there are universal milestones that typically developed children will display during their development. It is a lack of these milestones or a regression in development, that may be an early indication that your child has ASD.

Early detection of Autism involves noticing the absence of normal behaviors, not the presence of abnormal ones. According to Autism Speaks and the CDC (Centers for Disease Control and Prevention), the following delays should be immediately evaluated by your child’s pediatrician:

The video below is an excellent introduction to signs of autism spectrum disorder in children younger than 2 years old.

Warning Signs of Autism in Toddlers Older Than 2 years

Although the signs may be present, Autism is not typically diagnosed before the age of 2 years old. After that age, you may begin to see some abnormal behaviors, such as:

An excellent video tutorial to detect signs of autism, including examples of children with normal and ASD behaviors respectively, is shown here:

What To Do As A Parent

Some interesting studies have shown ASD behaviors be reversed completely with early intervention!

Below you’ll find some forum discussions here at Easy Baby Life, about babies or toddlers with possible ASD issues. You should also read this article on autism myths and misconceptions that parents often meet.

Share your thoughts and experience by commenting below or in the discussions. <3