Is your toddler or baby hitting himself in the head? Relax, this is common behavior and usually a normal development stage. We’ll go through the most common reasons, what to do about it, and when to worry. 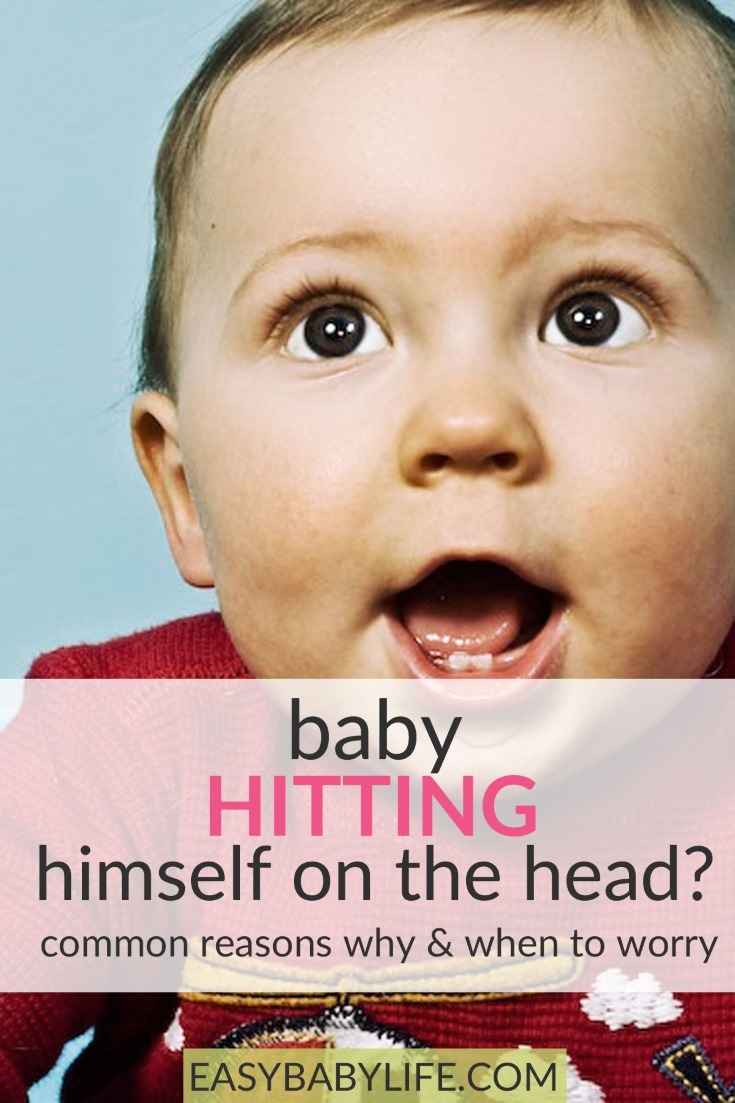 Mom’s Question:
We are concerned that our 10-month-old baby is hitting himself in the head. It seems he does this when he gets excited. Our son would hit the right side of his head with his right hand and sometimes both sides with both hands. And it seems he is doing this more often now.

We’ve read many forums where other parents are experiencing the same thing. However, I have not seen in these forums what explains this behavior and if it is normal.

Should we be concerned? Is this a normal behavior? What is the cause or explanation of this behavior?

Baby is Hitting Himself in the Head – Normal Or Not?

You’re completely right that this is common behavior, especially at around 1-year-old. The behavior can start at early as around 6 months and continue until the child is a few years old.

There are a number of reasons why a baby might be hitting himself in the head and it is completely normal.

Hitting themselves can also be a warning sign of developmental issues, and I’ll write more about that at the bottom of this article.

Normal Reasons Why a Baby is Hitting Himself in the Head

Babies hit themselves, bite themselves, bang their heads against the wall or floor, etc. It looks awful but is usually their way of coping with frustration and anger.

Often, the baby does the same (hit or bite) their parents too when angry with them or even just for fun and to see the reaction.

This way of hitting themselves when frustrated is often seen in young toddlers that try to achieve something that they find difficult – such as building a tower that just falls down or putting on their trousers.

Dealing with negative emotions is hard for any person, and for babies and toddlers, of course very hard. This is where toddler tantrums start too – the child really wants something, but is unable to manage it or is not allowed.

It’s tough to deal with strong emotions  – no matter if you are a baby of an adult!

Just like frustration and anger are strong emotions, so is excitement. Banging their head can be a child’s way of expressing excitement too. One of my children clearly did that, and obviously your son too.

It is quite easy to relate too, don’t you think? Being very excited and hit your head a little bit, clap your hands or jump up and down.

Again, this is a sensory way of handling strong emotions and completely normal. Older children and adults are more likely to clap their hands, dance, or cheer – because we’ve learned that these are normal and accepted ways to respond to the excitement. Babies just do what they feel like.

Another possibility is pain-relief, so having his ears checked could be a good idea, even though if you for sure can derive the behavior to excitement, and he is showing no other signs of illness, then I think you most likely have already identified the reason for his hitting.

But, since he uses hitting himself in the head as a tool to relieve strong emotions, be on guard if he suddenly starts doing if more frequently or at times when you don’t think he is excited. Chances are that he would do it also because of for example ear or teething pain.

Since you are quite convinced that your son’s behavior is related to excitement, you don’t have to worry. It is normal and it passes. Since your boy is now 10 months old, he is starting to understand words, and you can say “no” and gently stop him from hitting himself.

You can also show him with his hand how to “pat gently” or something like that.

BUT don’t make a lot of fuss about it – if your reactions are strong, or if he gets a lot of attention for this behavior, you might end up actually reinforcing it! So unless he seems to be hurting himself, try ignoring the behavior and focus on distracting him instead.

I’ve noticed, for example, that talking even to quite young babies (at around 1-1.5 years) in a very engaging way, confirming their feeling without judging can really make them calmer. At least sometimes.

But again, any kind of positive distraction is usually the most effective way with young children if you want to reduce a certain behavior.

When Hitting Himself in the Head is a Warning Sign

While in most cases, this is just normal baby behavior, a baby hitting himself in the head can also be a reason for concern.

Hitting the head all through the day for no apparent reason and falling behind developmental milestones would be a reason for concern and should be discussed with a pediatrician, but that does not seem to be the case with your son.

Other signs of worry would be if he would hit his head very often, randomly or if at each time would continue for more than 15 minutes.

But again, the way you describe it, I would believe this to be normal. You can, of course, film one of the events and show a doctor, to make sure the behavior would be considered normal when seen. In such a case, it can be a good idea to take notes on the frequency and length of the episodes too.

But in conclusion, as described by you, I wouldn’t worry.

Your boy is learning how to deal with his emotions, and that takes time. (A whole lifetime, really… ;-) ) Just make sure he doesn’t hurt himself or someone else. And don’t yell at him.

I hope this helps!
Paula

Parents, if your baby is hitting himself in the head too – please leave a comment below!

More Discussions About Babies That Hit

My Baby Doesn’t Want To Go To Me

Baby Hits Her Head When Tired? 9 Reasons to Investigate

My Baby Has No Hair! Hair Growth in Babies and Toddlers