Why do babies hit themselves? While it looks odd, there are some common, normal reasons for this behavior. However, there are other reasons that should warrant your attention. 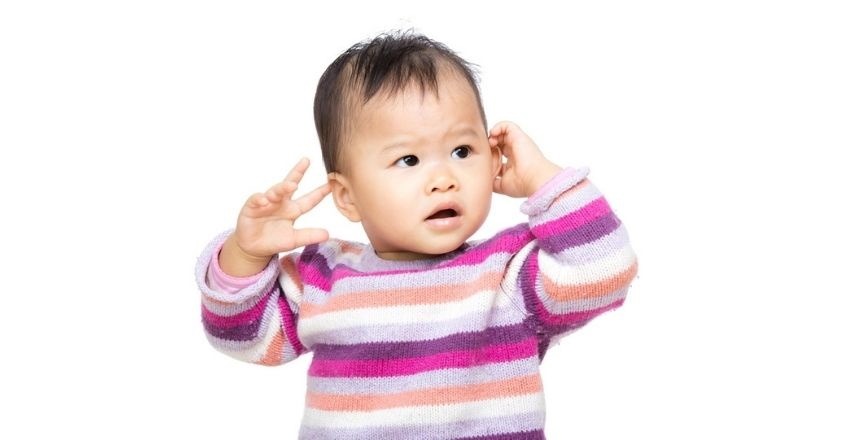 Mom’s Question:
Why do babies hit themselves? My 6-month-old baby girl hits herself… She started hitting her chest and now she hits her mouth and head. I need to know why they do this? Should I worry that something is wrong?

Reasons Why Babies Hit Themselves

It does look pretty strange and sometimes even scary when babies start hitting themselves. But this behavior is very common, just like biting or banging their heads against the floor. These are called stereotypic movements, or stereotypies. Some studies indicate that at least 20-25% of all babies and toddlers do this for some periods of time.

Around the age of 6 months, is also mentioned as a common starting point in particular for this behavior, according to Kiran Pure, a child psychologist, who was interviewed in Today’s Parent here. (Opens in new window)

There are different reasons why babies develop this behavior. These include:

1. A way to calm down oneself

Older babies and toddlers may experience frustration, anger, or anxiety at times. These babies are simply trying to find ways to cope with how they are feeling at the moment.

At this age, they can’t really express yet their feelings verbally.

This is very true for toddlers, who often want so much and become devastated when they are not able or allowed to achieve what they want.

2. A Reaction to Pain

Sometimes, infants hit one side of the head consistently as they react to pain. This may be due to an ear infection, or discomfort while teething.

In this case, the hitting may be a way to achive distraction and mitigate the pain.

3. A way to stimulate oneself

Sometimes, babies and toddlers are either tired, lonely, or under-stimulated, causing them to hit themselves in order to stimulate their body and increase their activity.

You can read here about a  baby that hit her head when tired.

This is actually common, especially if your child spends some time alone. If you suspect uder-stimulation as a reason for your baby hitting themselves, then try to engage in more activities with them and see where it goes!

Young babies can hit themselves simply because they are gaining control of their body and might actually find it interesting or entertaining to explore what they can do with their bodies, such as slapping their tummy, for example. For example, many moms report that their baby hit themselves in their head lightly while nursing.

5. Self Comfort and Sleep

Sometimes, these young children may feel that head banging helps them recall the feeling of being rocked to sleep at night, which they derive pleasure from. Hitting themselves rythmically is thought to be relaxing for them.

This is actually very common, and assessed to be normal, unless the child hit themselves so hard that they get hurt. (See below about sleep disorders).

You can read here about a  baby that hit her head when tired.

Another similar behavior is to shake their head while falling asleep.

Babies may also hit themselves because we as parents reinforce it!

For examle, in some cases, they lack enough attention from their parents or caregivers, and slowly realize that by head banging more often, they get the attention they want.

7. Working out their imagination

Infants and young children may resort to hitting themselves as a substitute for certain activities they would like to do at the time. While their imagination is infinite, because of their limitations as kids, they are often limited by their surroundings and oversight of their caretakers.

8. Disorders with sleep or development

Most of the time, children hitting themselves grow up with normal behavior. However, there is always a small chance that this is a sign of a possible sleep or development disorder.

If your child always hits themselves just before falling asleep, and there are no other unusual behaviors, it may be a way for them to lull themselves to sleep. This is normal, but if the hitting is violent and frequent enough to injure the child or really disturb their sleep, the behavior might qualify to be diagnosed as a disorder called a sleep-related rhythmic movement disorder. A detailed overview of sleep-related rhythmic disorder can be found in this article at Sleepeducation.org.

On the other hand, certain developmental conditions such as autism spectrum disorder can cause this behavior. If a child who hits themselves also have symptoms such as strong displays of emotion, or delays in speech, the child should be brought to a pediatrician to rule out a behavioral or dcvelopmental delay.

When Does the Hitting Stop?

Self-stimulation behavior such as hitting oneself develop before the first year of age, and may become worse as far as 2 years of age. Most of these stereotypies last until the pre-school period.

If the behavior isn’t due to pain or a medical condition, it can last for some time. My youngest started hitting himself and biting his hand when angry at around 8 months and continued until almost 3 years old.

He is a textbook example of normal babies hitting themselves – most babies start doing this at some point between 6 and 12 months old.

The behavior tends to peak at around 24-30 months – a period when many babies are going through rapid mental development and have big problems dealing with their own frustrations. This is part of normal development and is expected. (It isn’t called the “terrible twos” for nothing.)

While some babies may hit themselves for a couple of months only, others go on for years. Most babies grow out of it at around 3 years old, if not earlier.

What To Do When Babies Hit Themselves

First of all, you, of course, need to track down why your baby is hitting herself. Make sure to rule out any illness, such as an ear infection, a sore throat or teething. If it looks like your child has a medical condition, seek consultation with a physician.

If the hitting is not pain-related, see if you can find a pattern of when this is more likely to occur.

Does your baby tend to hit herself when she is tired, hungry, under-stimulated, in need of a cuddle or attention? If you can find a pattern, then try to adjust the routines around that situation to reduce the risk of your baby becoming so upset.

Just to reiterate, head banging is more often than not, an expected part of a child’s development. Most babies who exhibit this behavior grow up as normal children.

Above all else, make sure that your child is safe when they engage in head-banging behavior. If they still use the crib, clasps and rails should be secured properly. Avoid using crib bumpers as these can lead to possible strangulation or suffocation.

Something to remember is to not reinforce the behavior.

During the day, distracting them by offering different forms of play is the best way to stop unwanted behavior until your baby is well over 2 years old and has started to understand the spoken language really well. Try to make her focus on something more enjoyable than hitting!

Something to remember is to not reinforce the behavior. If head banging happens at night, don’t check in on them every few minutes. They may associate this with your attention, causing them to do it even more often. So don’t make a big fuss about it. Just make sure your baby doesn’t hurt herself.

As already mentioned, headbanging and other ways of hitting themselves can, in rare cases, be a sign of a developmental issue. In these situations, there will be other signs as well, such as falling behind several other developmental milestones or losing certain abilities he used to have.

Extremely frequent head-banging, either throughout the whole day or continuous even if it clearly hurts already, can also be signs of concern. Some children will choose self-stimulatory behavior such as head banging over interacting with other people.

If you notice any of these situations, it is best to have your child seen by a child psychiatrist or psychologist.

And you can also watch this video, which shows a very clear example of Autism related behaviors including headbanging.

You can read about the warning signs of autism here.

As you have seen, there are several common and normal reasons  why babies hit themselves.

However, if you suspect that the hitting is related to pain that requires medical attention or developmental issue, contact a doctor as soon as possible.

Early intervention is always the best!

Is Your Child a Head Banger? - First With Kids - UVM Children's Hospital

And finally, a great reference book for babies’ and young children’s health issues, check out Caring for Your Baby and Young Child, Birth to Age 5 by the American Academy Of Pediatrics.

I hope this helps,
Paula

Who can relate? Add your comments below.