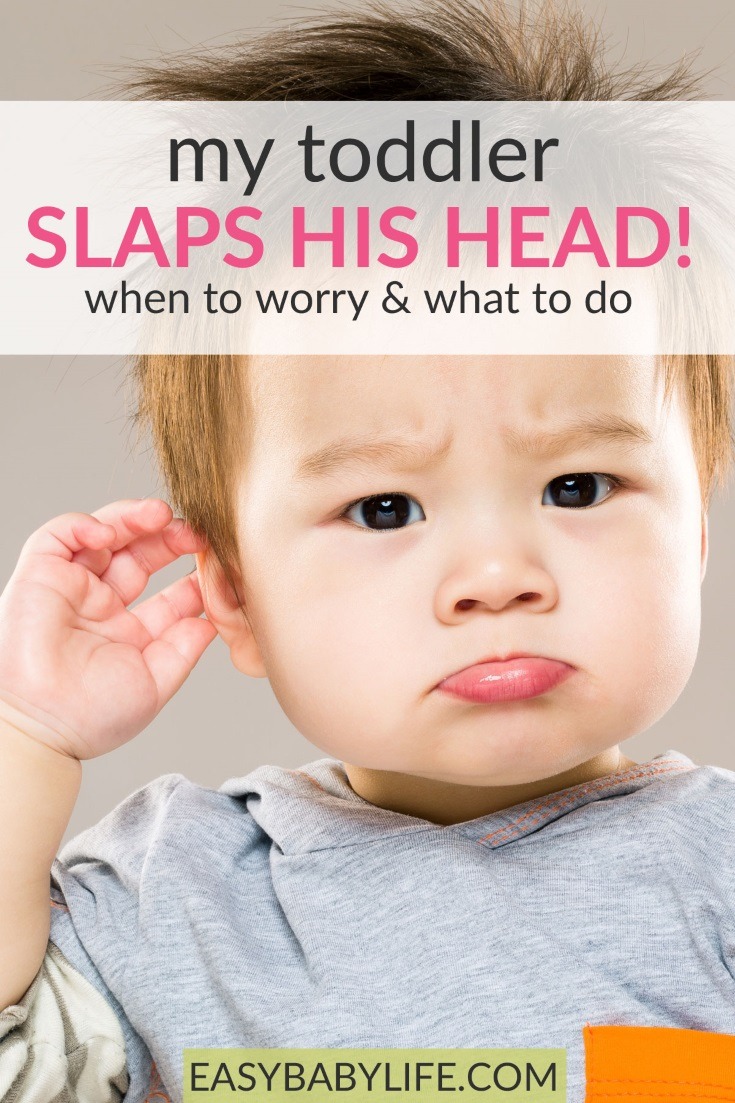 I am worried because my toddler hits the side of his head with his hand.

What happens is that my baby, who is 14 months old, soon to be 15 months, continually slaps himself on the side of his head. What could this be? Could he be sick? What should I do about it?

Reasons Why a Toddler Hits the Side of His Head

When a toddler continually slaps his head, it can be for a number of reasons:

Pain on the side of the head or throat

When a baby or toddler slaps his head on one side continuously, it might pay to get this checked out with your doctor. You didn’t say if it was just one side, but I wonder if he has an ear infection, a sore throat, or problems with a tooth coming in.

Some babies don’t cry unless pain is severe, but they are still annoyed by it and his hitting maybe trying to get the annoying feeling away or dull the pain he is feeling.

My sister’s oldest son had many ear infections as a baby, and never cried or seemed ill, but would rub his eyes. It took Mom and Dad several burst eardrums before they started to recognize the eye rubbing as a sign of an ear infection.

Babies can’t verbalize pain, or sometimes even locate it. So any repetitive unusual things like rubbing or hitting may well be showing you he is in pain.

There may be other reasons for a baby hitting his head too, such as anger or self-soothing. You can read more about babies that hit themselves, why, and at what ages in this thread.

If you are sure your baby is not in any pain from infection or teething, and he has developed good social skills, such as eye contact and babbling, this is likely just a behavior he is trying out. He will soon get bored with it if you do not artificially reinforce his head-slapping by paying attention to it.

However, if you have doubts about your baby’s social skills being in line with his age, be sure to discuss this with your pediatrician. Repetitive, unexplained behaviors in addition to social skills falling behind, can be a sign of autism spectrum in babies and toddlers and should be evaluated as soon as possible.

So to conclude, I’d suggest you rule out any illnesses as soon as possible. If you come to the conclusion that this is just a behavior he is trying out, try a combination of ignoring it and distracting him.

If you see that he is about to get started with the slapping, draw his attention to something else – like playing with you, a toy he loves, music or something else. Don’t try to actively stop him or react strongly. This will only reinforce the behavior.

I hope it sorts itself out soon.

More Babies That Hit Themselves

5 Powerful Parental Habits for Happy Kids with Self Worth!

1 Year Old Cries In Pain When Pooping – Due To Cow’s Milk?

8 Things to Do Instead of Losing Temper with Your Toddler

How To Help Your Toddler Talk & Boost Their Language Development