If your baby’s arm is shaking or your child is trembling or shaking in other ways, this article will help you identify possible reasons – from a normal immature nervous system, newborn reflexes, and shuddering attacks to metabolic issues, illnesses, and seizures.

Also learn the signs that you should contact a doctor. 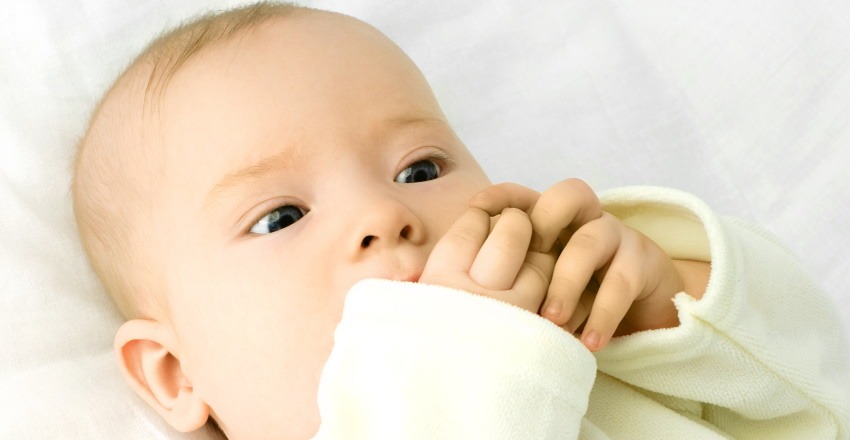 Dad’s Question:
Our 4 1/2-month-old baby’s arm is shaking! It starts to shake when he is attempting to grab something and can’t get his grip on it or when getting annoyed or sleepy and is about to cry. It appears it’s mainly when these things are happening around him that this begins.

When we hold his hands, the shaking stops but when you let go, it picks right back up again. The best way to describe it would be as if someone was super excited or nervous that their arms would be shaking in that way.

We don’t know if this is just a part of growing up or something a bit more serious. These happen throughout the day and other times he holds his hands nice and straight.

Is it any kind of neuro problem?? I would appreciate any input!

What you describe may be normal shaking due to your baby’s immature nervous system, or other expected reasons.

I remember believing that my firstborn suffered from some kind of brain damage when she was a newborn due to her weird movements and shaking… But it turned out to be completely normal newborn movements.

Certain shaking movements are normal and expected during infancy. Such movements are typically brief, and can be easily stopped by holding the affected body part. During the shaking episode, the baby otherwise seems normal, and shows no signs of illness. Normal shaking movements self-resolve as the baby grows and the brain matures.

The nervous system of full-term infants is immature at birth, and even more so in premature infants. Reflex movements that are present during the first few months of life are replaced by new developmental skills as the baby grows.

This movement is a sudden, brief jerking of the arms and legs with the fingers fanning outward on the hands. The shaking stops when the arms or legs are held. It is typically seen when a baby becomes startled or something unexpected occurs. The baby may also cry. It is normal for this reflex to occur several times a day, including during sleep. In most babies, it resolves by age four months.

Also called the “fencing reflex,” this movement occurs when a parent turns the baby’s head toward the shoulder.  In response, the arm reflexively extends outward in the same direction as the head.  Instead of a shaking motion, it is more of an arm stiffening. This reflex resolves between five to seven months old.

When infants become upset, they may exhibit brief shaking movements on various areas of the body.  Lip quivering is common, both prior to or during a crying episode.  Newborns may shake their arms and legs vigorously while crying, but this should resolve by age two months.

Shuddering attacks are brief but sudden, uncontrollable movements of the head and arms.  The infant or toddler otherwise appears normal during the episodes, and there is no loss of consciousness.  In many ways, however, the episodes resemble seizures.

Here is a video showing what such an attack may look like:

Because it is difficult to for parents to distinguish this type of shaking from more concerning conditions, they should consult a doctor. Shuddering attacks require no treatment, and self-resolve by age two to three.

Other shaking movements in infants are a sign of a medical problem.  They are often described as jitteriness or tremors: involuntary, rhythmic, and periodic movements.  The shaking persists despite holding the affected area, and may be associated with a change in behavior or consciousness.

In these situations, a doctor should evaluate the cause of the shaking, and determine if treatment is necessary.

Some infants experience low blood sugar during the first few days of life.  While a modest decrease during the initial hours is normal, routine newborn care promotes stabilization of the blood sugar level. This includes immediately drying and warming the baby, and initiating feedings.

Risk factors for persistent hypoglycemia are intrauterine growth retardation, low birth weight, maternal diabetes, and prematurity .  In other cases, a complicated birth process can cause stress that depletes the infant’s glucose reserves.  Persistence of low blood sugar usually indicates the presence of another medical problem.

The movement seen in infants with hypoglycemia can be described as jitteriness.  Other signs include difficulty maintaining a normal body temperature, poor feeding, and irritability.  In severe cases, seizures or coma can develop.

Vitamin D is important for a variety of normal body functions. It is essential for the absorption of calcium into bones, and it plays a role in immunity and the prevention of chronic diseases.

Low vitamin D levels have been documented in newborns who have tremors. It is believed that low transfer of vitamin D from the mother to the fetus contributes to this.  Tremors resolve once vitamin D supplementation is initiated after birth.

In addition, breastmilk is naturally low in vitamin D. The World Health Organization and American Academy of Pediatrics, therefore, recommend vitamin D supplements for all breastfed infants.  Infant formulas are fortified with vitamin D, so supplementation is unnecessary for formula-fed infants.

Magnesium is an electrolyte that helps the skeletal muscles and heart contract properly, and is important for a variety of metabolic functions.  Vitamin D, estrogen, and the kidneys all help to maintain normal magnesium levels in the blood.

Very low levels can cause infantile tremor syndrome, seen most often between the ages of six to 30 months.; Frequent shaking movements occur while the baby is awake, but not during sleep.  Magnesium supplementation not only improves this condition, but prevents future associated developmental delays.

This condition is rare in situations where adequate nutrition is available.

When parents witness any form of shaking, their first thought may be, “Is my baby having a seizure?”; Seizures are unusual body movements or behaviors that occur due to a specific trigger. Many parents are familiar with seizures that involve the whole body stiffening or jerking, and during which consciousness is lost.

Other types of seizures may affect only one area of the body, or be associated with no movement at all; the baby is “awake,” but unresponsive during the latter type.  Many seizures are associated with abnormal brain wave activity that can be detected by an electroencephalogram (EEG).

Any infant who experiences such symptoms should be evaluated by a healthcare provider.

In the presence of illnesses, rapid increases in body temperature can trigger a seizure in infants and toddlers.  The whole body shakes or jerks, the eyes roll back, and there is a loss of consciousness during these episodes.  They are common between the ages of six months to three years old, and may reoccur during subsequent febrile illnesses.

Unlike other seizures types, there is no short-term or long-term brain injury.  Aside from fever management, no medications are necessary. Most children outgrow this tendency by age five.

Infantile spasms develop between the ages of two to 12 months old.  They are characterized by repetitive spasms which last only five to ten seconds.  In many cases, the episodes are very subtle and difficult to recognize.

The most concerning aspect is the detrimental effect on infant development. Previously achieved motor, social, and cognitive milestones are lost. For example, a four-month-old who frequently coos and smiles will stop doing so.  Because of the potential for poor outcomes, it is important for these babies to receive an evaluation by a pediatric neurologist as soon as such changes are detected.

10. Seizures Due to Other Medical Problems, including Infections

There are numerous medical conditions for which seizures are a primary symptom. Seizures are common in infants who experience birth trauma or are born with a brain malformation. One in 2500 infants is born with a genetic or metabolic disorder that can be associated with seizures.

A potentially preventable cause is infection, and prompt medical intervention is critical to a good prognosis.

Meningitis is an inflammation of the protective sac that surrounds the brain and spinal cord.  Viruses, bacteria, fungi, and tuberculosis can all cause this condition. During the first three months of life, infants are at high risk of bacterial meningitis caused by group B Streptococcus, E. Coli, or Listeria monocytogenes.

These infections are most often transmitted perinatally from mom, but may not be evident for several weeks.  Older infants are prone to developing pneumococcal and meningococcal infections.

Infants who develop bacterial meningitis usually become quite ill. Classic signs are a bulging “soft spot,” lethargy, or irritability.; Those who survive develop seizures after recovery, along with other neurological deficits.

Encephalitis is defined as inflammation of the brain tissue itself.  In infants, herpes viruses are the most common etiology. Similar to cases of meningitis, infants with encephalitis appear very ill, and have diminished responsiveness and fevers. They may experience seizures during the acute phase of the illness, and after recovery.

Other causes of shaking in babies

This condition was previously known as non-epileptic infantile spasms or benign myoclonus because of the “jerking” nature of the movements.  During the episodes, the head, neck, and upper body experience a one to two-minute spasm. Despite their appearance, benign spasms of infancy are not seizures.

The average age of onset is five months old, with resolution by age three.

Infants who have had prenatal exposure to opioids, alcohol, and other substances can develop jitteriness and tremors a few days after birth.  Other symptoms include high-pitched crying, irritability, difficulty sleeping, and poor feeding .  Hospital care is necessary to support infants through the withdrawal period.

Depending on the amount and timing of exposure, longterm neurological and cognitive effects can result.

When to Call A Doctor

Shaking in an infant can be a scary and worrisome sight for parents.  Although some types of shaking are normal, if there is any suspicion that something may be wrong, it is best to consult a doctor.  Here are signs that indicate medical intervention is needed:

Answer to the Question

Now, back to your question after this overview. Your baby’s arm is shaking and based on the description, it would be best to have the baby evaluated by a pediatrician.  At five months old, the moro reflex should have resolved.  While it is reassuring that the shaking stops while the baby’s hand is held, a doctor can determine whether or not the shaking is normal or a sign of a concern.

P.S. Hey, parents! If your baby’s arm is shaking too, or you have experiances of similar situations, please share below!

Read Next: Babies With Shaking And Seizure Issues

Baby Passing Out While Crying – Doctor Says It Is Normal??

Sick Baby Not Eating His Milk – I Am Worried!