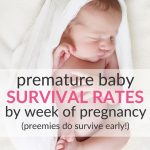 In this post, you’ll find up-to-date statistics on premature baby survival rate by week from pregnancy week 22 and on. And I’ll tell you a little bit about my own journey too. 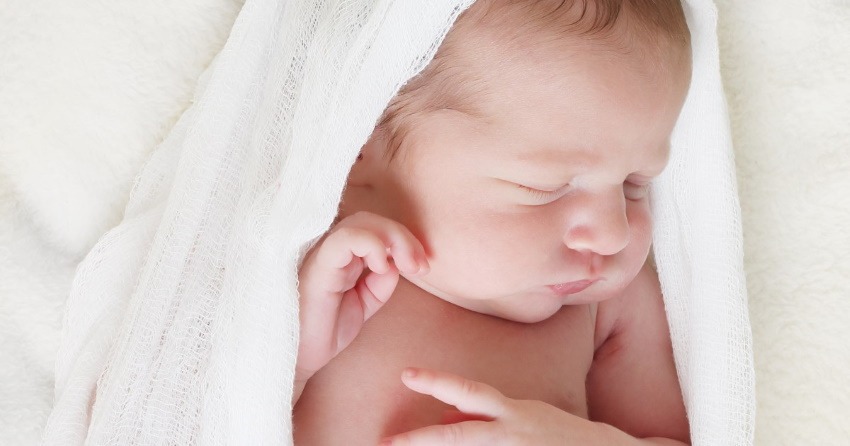 Being at risk for a premature birth of your baby can be extremely stressful. I know, because I’ve been there! However, the premature survival rate by week of pregnancy provides hope! Most babies really do survive even if being born very early!

First a bit about my story of almost giving birth in week 25:

When I was pregnant with my first child, I involuntarily got to learn about premature baby survival rate by week of pregnancy.

You have probably read in the newspapers about babies miraculously born and saved as early as after 22 weeks of pregnancy. A few years ago, a baby in Germany actually survived being born before the end of week 22, which is a new record.

When I came in with ambulance to the hospital, having contractions three minutes apart and dilating (and in a complete panic) in week 26 of my pregnancy, the doctors and midwives were wonderful (and smart):

They wanted to calm me down since stress is a known factor involved in preterm labor. And it worked. I did feel slightly less panicked.

And my baby, predicted by all involved doctors to be born within hours, actually stayed in my womb until week 37. A small miracle. (And a lot of lying down on my part.)

In this article, I have gathered statistics from the available research on baby survival rates per week during pregnancy from week 22 completed to week 33. During these weeks, the chance of survival increases on average from 21% to 100%.

Of course, statistics are just numbers and each case of preterm labor is special. Nevertheless, these percentages do say something about our little babies’ chances of survival if the pregnancy ends much too soon.

If you are reading this, you might be in the very stressful situation of either being at risk for preterm labor or having already given birth to a preemie. In such a case, my heart goes out to you!

Feel free to leave a comment to share your thoughts and experiences at the bottom of this article.

Baby’s Chances of Survival If Born Early Week By Week

When can a pregnant mom breathe out in relief? In what week is her baby big enough to survive preterm labor and hopefully develop normally in the future?

The answer isn’t all that simple. It turns out that it isn’t only the week of pregnancy, but also the weight of the baby that determines the chance of survival (if assuming that the child is healthy).

In addition, researchers have recently also been able to pinpoint two additional factors that contribute to the chances of survival for a particular child: the gender and whether or not the mother received ante-natal steroids before the baby was born. The latter is a medicine that promotes lung development in the baby.

The factors influencing the survival rates

Babies that are heavier than the average, are girls, singleton (i.e. not twins or more), and/or where mom receives ante-natal steroids in time have tended to have higher chances of survival than the above figures, generally speaking.

The National Institute of Child Health and Human Development (NICHD) has developed a tool, where doctors and parents can get a rough guide to potential premature survival rates in their particular situation. You can try the tool here. But please remember that it is NOT intended to project the outcome for individual infants!

Survival rates for extremely early preterm babies have improved dramatically over the past 15 years. In 1995, practically no children survived when born as early as 22 weeks gestation age, while in 2008 21% survived, as seen above.

The earliest born babies, at pregnancy weeks 22 and 23, however, are apparently still complicated to save. Even though survival rates have improved also for these children, the survival rate almost doubles between gestation week 23 and week 24.

Going back to my own situation, the doctors gave me a few landmarks to strive for. The first one was to keep my baby in for 12 hours. If I managed that, the ante-natal steroids injection would have helped mature my baby’s lungs to facilitate breathing.

The second milestone, when things started to calm down, (I was still in the hospital medicated through an intravenous drip and ordered complete bed rest) was to get as close as possible to full week 28. Babies born after 28 full weeks tend to almost always survive and the risk of serious brain and lung damage falls sharply.

The next goal was 32 weeks completed. By then a (healthy) baby most likely will be born with no permanent injuries at all.

Finally, 35 weeks. After that, most babies are more or less ready to be born. They may be a bit skinny and need help to suckle, but with a little assistance, they are just fine.

SO when to take that deep sigh of relief?

I’d say when you enter week 28 of pregnancy chances are huge that you will bring home a perfectly healthy baby regardless of when labor sets in. But compared to some 10 years ago, giving birth to a baby already in pregnancy week 24 or 25, your baby stands a very good chance of surviving with the right neonatal care.

I hope you found this information on premature baby survival rate by week and factors useful. At least for me, reading and learning about what to expect for my little (potential) preemie helped me prepared mentally and feel calmer – which in turn, maybe, helped keeping my daughter inside of me longer, who knows.

Here are some useful resources if you want to learn more.

Childbirth Videos That Are Helpful (Even When You’re Pregnant)

Guide to Prenatal Classes Online – Baby Prep On Your Couch (Well, And Floor)