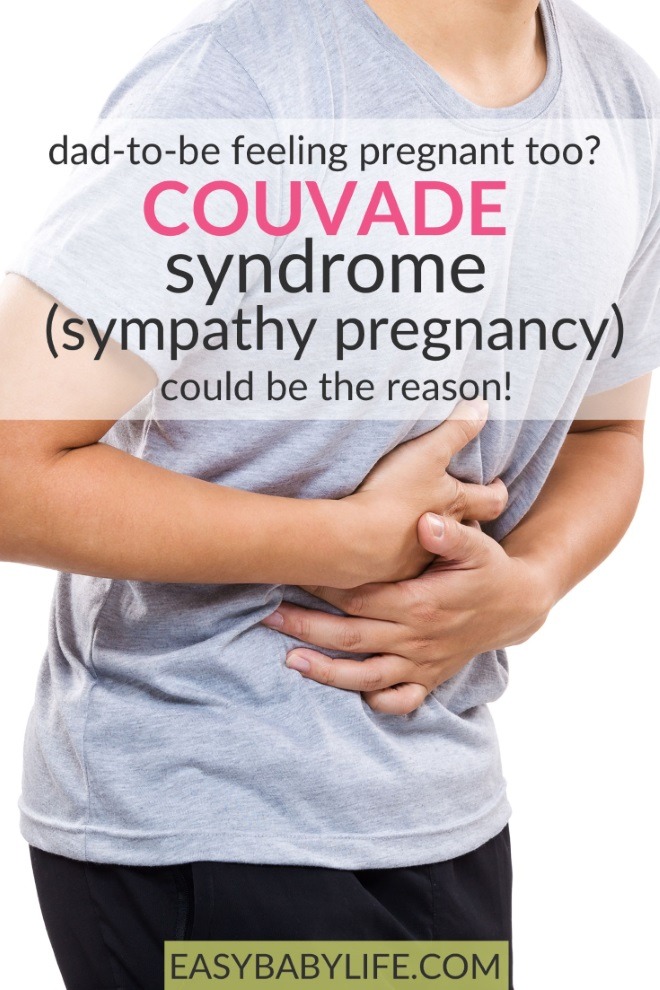 If you gathered a group of fathers and asked them if they ever thought they had Couvade Syndrome, you would probably get lots of shrugging shoulders and blank stares.

However if you start asking these dads if they ever noticed any unusual weight gain during their partner’s pregnancy or if they ever found themselves getting queasy during the day, you might be surprised to get a lot of nods and shy smiles.

While it may seem embarrassing to feel pregnant when obviously you are not and never will be, new research has found an explanation for the pregnancy symptoms. (And it is not due to helping out with the “eating for two”.) :-)

The explanation has been named “couvade syndrome” or – maybe a nicer name – “sympathy pregnancy”. Syndrome sounds pretty bad, I think, but it really is just a name for symptoms experienced by men during their partner’s pregnancy.

This post is written by a dad guest blogger, Chris, who himself, experienced a bit of sympathy pregnancy with his first baby.

So what is this Sympathy Pregnancy?

Couvade Syndrome is a psychosomatic condition experienced by the male partner of a pregnant woman. Although this condition is psychosomatic, the symptoms associated with this seem very real.

Symptoms usually appear during the third month of pregnancy and can become severe by the third trimester. Symptoms are the same as those suffered by pregnant women:

Is there a cure?

Symptoms are only alleviated by one thing: the birth of the child. Sorry guys.

How prevalent is Couvade Syndrome?

There are two schools of thought here. Many researchers deny its existence completely. They attribute the appearance of symptoms to a father’s nerves, eating habits, or simply changes that pregnancy triggers in one’s life.

Other experts claim that the condition is on the rise, especially in western industrialized nations. Researchers believe this rise is due to expanding and more active roles fathers are playing in both childbirth and childcare. Still more studies are even showing a greater incidence of Couvade Syndrome in men when they are part of a couple experiencing infertility issues or if the father was adopted as a child.

What can Dads do if they experience symptoms of sympathy pregnancy?

While scientists argue the existence of sympathy pregnancy, the manifestation of symptoms and the physical discomfort caused appear quite real to men.

Some things that Dads can do to help include:

If nothing seems to alleviate the symptoms, Dads can be assured they will go away, but only after the birth of the baby.

In the meantime, interpret the signs as something positive – you are obviously very engaged in your partner’s pregnancy! Prepare by reading up – a good book is for example The Expectant Father: The Ultimate Guide for Dads-to-Be. Attending a prenatal class together is even better preparation.

My take on this syndrome

If you’re an expecting father with unusual cravings or cramping legs, stock up on those foods and get a nice massage and ride it out. The reward at your journey’s end is definitely worth it.

Although more familiar with the term, sympathetic pregnancy, I have no doubts about the existence of Couvade Syndrome. I can’t say for sure if I suffered from the full brunt of the syndrome, but I can’t ignore the weight gain of almost thirty pounds nor can I deny the strange food cravings I had during the pregnancy (And yes, I am a DAD writing this.)

I do recall several bouts of nausea at times as well but it’s hard to say if that was entirely due to the syndrome or to something else.

Like many dads, I was excited at the prospects of being a father and I was very anxious for the pregnancy to be over with and to meet my little girl. I think doctors’ more common view is plausible too; that my weight gain and cravings could be attributed to nerves and anxiety as well and not Couvade Syndrome.

With all of the possibilities and unknowns about Couvade Syndrome, it would be fascinating to see some more in-depth studies about its causes. In the meantime, if you’re an expecting father with unusual cravings or cramping legs, stock up on those foods and get a nice massage and ride it out. The reward at your journey’s end is definitely worth it.

Here you can watch a video discussing sympathy pregnancy.

Do Men Get Pregnant, Too? - Video

Now over to you – have you (or your hubby) experienced couvade syndrome? In what way? Or do you think this is just a fantasy? Share your thoughts by leaving a comment below.

5 Helpful Tips If Baby Refuses To Sleep For Dad

Dad Guide to Breastfeeding Hormones (Where Did My Wife Go?!)

Can Stress Cause Miscarriage? – Yes, Maybe, according to Research…