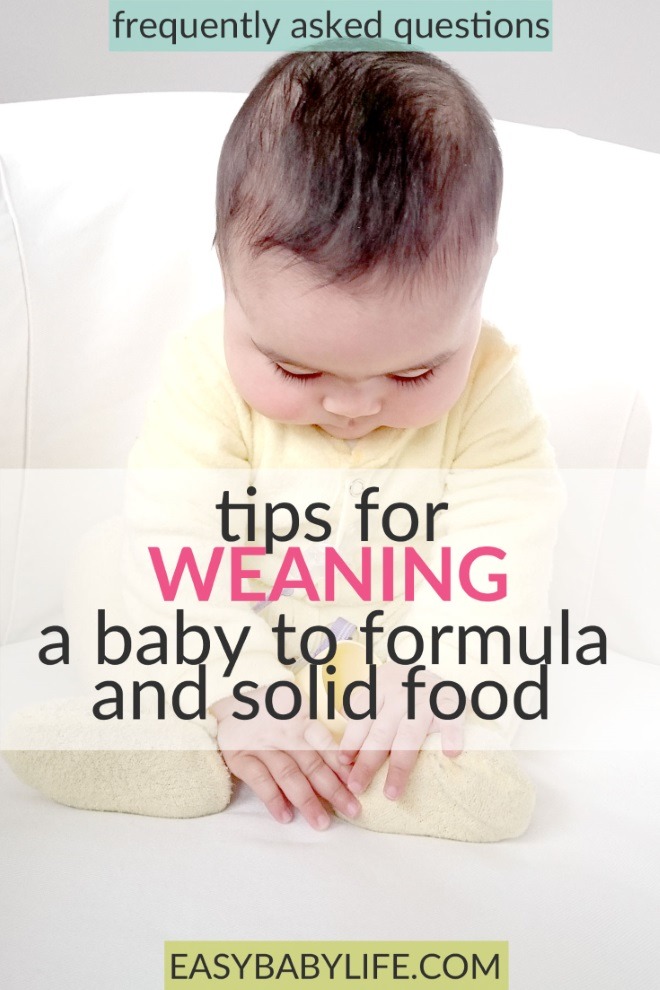 Pin
Mom’s Question:
I have just started to wean my 5, 1/2 month baby, from breastfeeding to bottle and solids, but he hates formula and the bottle. What can I do?

I have also just started to wean my son on to solids, at the beginning of this week. I chose to do this at 5 and a half months, as my family and I are going away on holiday in the first 3 weeks of October, otherwise, I would have left it until 6 months.

I have started him on Rice cereal after his first feed in the morning for the first 3 days, then on the third day I introduced Banana blended in the morning after his second feed, and then again in the evening I introduced Rice cereal, for his dinner. I have found that he has not wanted his breast milk as much; I also noticed he has dropped 2 feeds, as he always had 8 or more breastfeeds in a day.

The thing is I have tried to see if he will take to formula milk in a big bottle, but he does not want to take to it, he wants me. I wonder if he would prefer a smaller bottle? Do you have any tips for me? As I am breastfeeding at home not out and about, will he ever take to the bottle?

As I would like to start going out of the house for walks, will he ever stop wanting his breast milk? This will be a problem for me on holiday, as I don’t feel confident to breastfeed in public, and I want to start to wean him altogether now, will I ever get there?

Can you help me with some information, and tips please, many thanks.

Tips for Weaning Baby to Formula Step By Step

First of all, I want to congratulate you on the successful introduction of solid foods! If your son is already, after only a few days, starting to breastfeed less it means that he eats enough other foods to be content. That is certainly not the case for many babies when starting with solids!

A few things you can do to try to make him accept the bottle are:

All this said, it is entirely possible that your baby will continue to reject the bottle for a long time. In that case, you might want to consider a sippy cup if you really don’t want to breastfeed.

It may also be that he simply doesn’t like the taste of the formula. Experiment with different brands, and also try mixing an increasing share of formula in a bottle of breast milk if you manage to get him to accept the bottle with breast milk in it.

Some breastfed babies seem to prefer ready to feed formula – don’t ask me why. My youngest son was like that, and I have heard several other moms say the same. Maybe it is something with texture.

Ready to feed formulas are more expensive, but very convenient if they are only used as when traveling or at night, for example. Here’s a quality formula, available at Amazon.

Pumping breast milk and feeding in a bottle is also an option if he finally accepts the bottle, but not the formula. You can read about different types of breast pumps here.

I understand your stress and concern since your vacation is only a few weeks away. To take away some of the stress for both you and your baby, I think you should also consider if there is any way at all that you could become more confident regarding breastfeeding away from home.

I know that for some mothers it is unthinkable, but it really makes life a lot easier! And trust me, it can be done without anyone even knowing for sure what you are doing if you practice a bit. (I’ve even breastfed in public is a very religious country once on vacation, but don’t tell anybody… :-) )

For tips on how to breastfeed in public in a discrete way, click here.

And here are some videos to empower you to try breastfeeding in public.

Last – even if you don’t think of it that way, you have already started to wean your baby from breastfeeding. That happened with his first spoon of cereal! Many babies wean to solid foods primarily rather that formula.

I think you and your baby seem to be doing just fine in the weaning process, he just needs some time. Continue offering him the bottle, but make some preparations to have a great vacation even if he still refuses the bottle. Never try to push him to wean. it will only slow down the process and make the feeding miserable.

Good luck!
Paula
P.S Moms, if you have additional tips for weaning baby to formula or what else to do in this situation, please share by leaving a comment below!