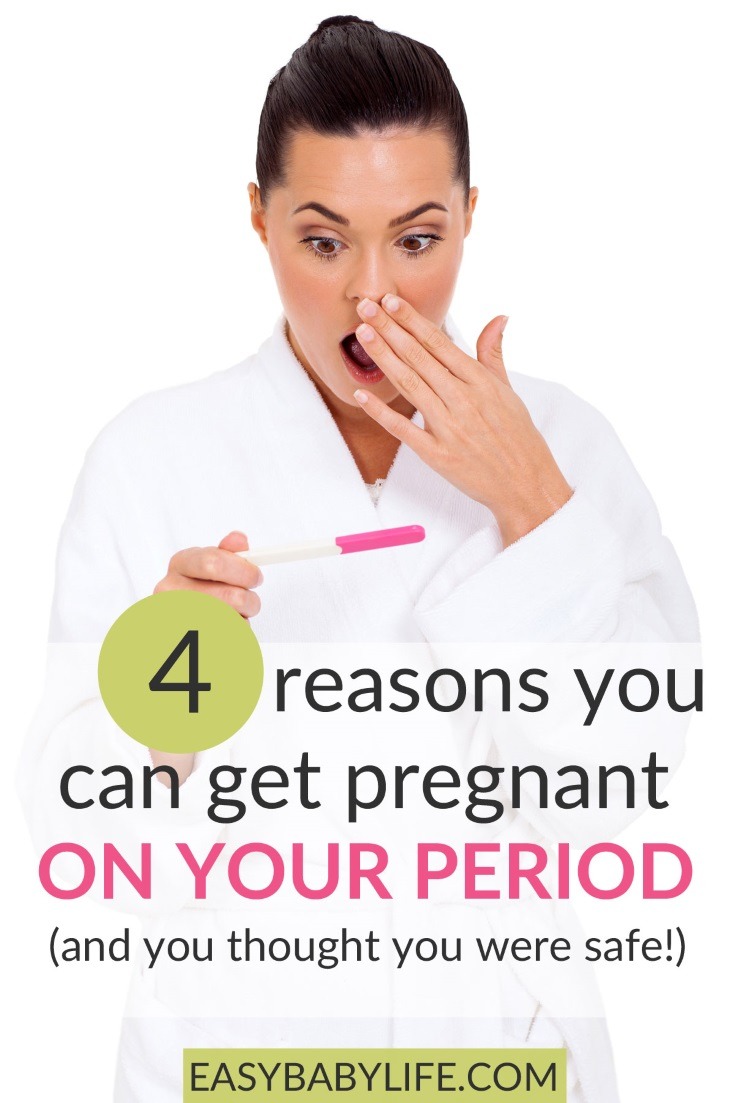 Wondering if getting pregnant on your period is possible? Likely?

Many people don’t think that it can occur, but think twice! A woman I recently talked to knew for sure that she and her spouse had sex only once and during her period. She recently gave birth to their fourth child…

So how can this happen? We explain it all here.

Getting Pregnant On Your Period

When you go through your menstrual cycle, your ovaries are getting an egg ready to be released. Then, when you ovulate, that egg is released into the fallopian tubes. Usually, the average menstrual cycle lasts about 28 days, but some can have cycles that are shorter, while others have other cycles.

Sometimes your menstrual cycle can even vary in length from month to month. Sometimes it may be a bit shorter, and sometimes it can be a bit longer.

After ovulation occurs, there are only about 24 hours of time when you can conceive. If your egg does not get fertilized, then it is shed in the next period you have.

However, if you do conceive, then the fertilized egg goes into the uterus and embeds in the lining of your uterus and develops into a baby. In such a case, the week of menstruation is actually counted by your midwife as your first week of pregnancy.

If you are not sure when your ovulation usually takes place, make sure you find out! Get yourself a good ovulation prediction kit immediately.

You can read about the most common ovulation symptoms here.

So How Is It Possible to Get Pregnant During Period?

So, you may be wondering how it is actually possible to get pregnant while you are menstruating. Here are a few ways that this can occur:

However, there are times when the sperm can last from 5-7 days at one time and they still may be able to fertilize the egg. This means that if you have sex while you are having your period, the sperm could live long enough to be alive when you ovulate, and conception could occur.

Short menstrual cycles – Usually ovulation occurs about 14 days before you have your next period, no matter how long your period is. So, if you have a short cycle, it is possible that you will ovulate while you are still having your period, which makes getting pregnant possible. If you have sex during your period or even right before it occurs, pregnancy can occur.

Ovulation spotting – Sometimes spotting occurs during ovulation, which makes a woman think she’s having her period. Often this leads a woman to think she got pregnant when she had her period.

I hope this makes it totally clear that sex during menstruation is not “safe” if you want to avoid pregnancy.

Getting Pregnant After Miscarriage? No Need To Wait Study Says

The Link Between Weight And Fertility In Men (Potential Dads Read This!)

Miscarriage Statistics by Week and What Affects Your Risk!