What can be the reasons if a 21-month-old toddler is not talking or trying to say any words? How “late” is it?

Here, a concerned mom asks about her 21-month-old who hasn’t started to talk yet. We go through normal language development and milestones, what is considered to be late, possible reasons for delayed language and speech developement, and what to do as a parent. 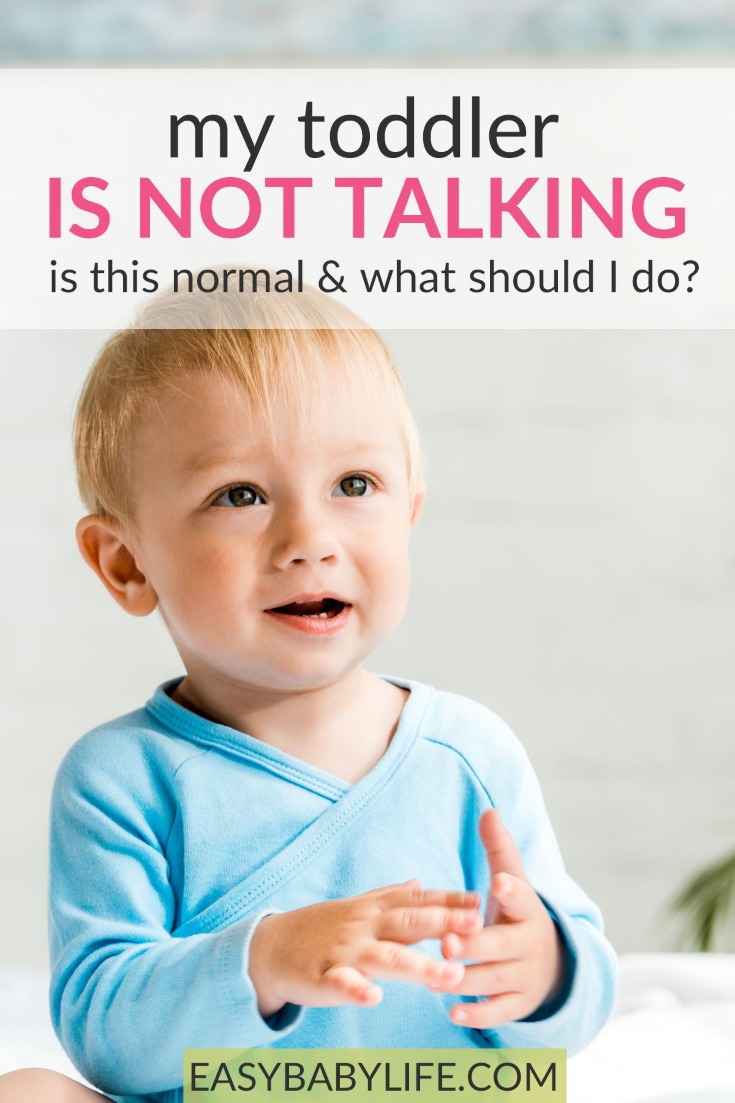 My 21-month-old toddler is not talking or trying to say any words, not even ”mama”. Is this abnormal? I am really worried that something is wrong with him, because I think it is very late not to talk at all at 21 months of age.

21-Month-Old Toddler is NOT Talking: Possible Causes and Actions to Take

So your 21-month-old toddler is not talking at all. It is true that this is quite late. In general, 1 out of 6 children may exhibit signs of language delay by 2 years old.

Looking at language development (and communicating in general), these are the expected developmental milestones per age group:

Babies start to use their voices to communicate. Some examples are cooing and babbling. You can hear them say “ooohh”, “aaaahh”, “ma-ma-ma” or “ba-ba”. They sometimes make garbled sounds, or try to repeat what you say, as if they’re part of a conversation with you!

As they’re nearing their first birthday, they may start learning their first word or two. Mostly, they try to communicate by their actions or gestures.

By this time, babies understand that they can call their parents specifically using “mama” or “dada”. They also start to understand the meaning of some words, like “no”. Sometimes, they can say only the first half of a word, like “da” for dog.

They may also now know several other words. Most toddlers can follow simple instructions that have gestures, such as “kick the ball”. It also goes the other way around – they now know how to communicate by pointing at objects.

By this age, Many toddlers now learn and use around 20 to 50 words! They start combining a few words to make short phrases or sentences. Note that although they can understand a lot of words now, they might still have problems with pronunciation, which is completely normal.

At this stage, they also start to understand simple directions, even without any gestures, like “pass me the ball”.

Speech is improving quickly, with more words and longer sentences. Some words might not be fully comprehensible yet, but generally most people will understand what they’re trying to say. They still find it easier to use gestures along with words so that people can understand more quickly.

Usually by about 2 years, toddlers are starting to learn at least one new word per day and try to repeat them.

So, just as you say, not talking at all at at 21 months is definitely late! Based on the current guidance of experts, instead of the “wait and see” approach, it’s best to act early so that kids who are at risk of developmental disorders may receive earlier treatment and support. This is especially true for children who are younger than 3 years old.

You don’t mention whether your son does interact with you, and how he does it. Does your little boy make noises and respond with noises? Does he follow simple commands and understand simple questions? Does he point to pictures when you read books together? Has he said at least a word or two?

In short, has he been able to achieve the other language milestones, at the right order? If he has, that in itself is a good sign. What you have to check next is which stage he is in right now.

Take a look at these points. These are signals that you should discuss your son’s development with his doctor to rule out any language delay or disorder:

There are cases when children might simply be late in their developmental milestones – my oldest son didn’t walk at 20 months! He had a special check-up for this, but nothing was wrong with him. He just liked crawling!

However, healthcare authorities like the Centers for Disease Control and Prevention (CDC) advise not to wait discussing with your son’s doctor. It can take some worrying off your chest and if your baby does need help – the sooner he gets support, the better!

What can cause a language delay?

More languages mean more words to catch up on! In a bilingual or multilingual environment, a child may seem to take longer to learn words and hit developmental milestones, but this is quite normal.

Sometimes, babies that live in a very quiet environment, without very much interaction, take a little longer to start talking. A lot of parents also notice that second or third babies tend to talk a little earlier, as they have a lot more interaction and stimulation from older siblings.

Some studies also show that boys might take a little longer to develop language skills compared to girls.

Many autistic children have language concerns – about 75% of kids with ASD have some form of language delay. The exact reason why (or how) isn’t clear yet. More research is underway to determine the relationship between ASD and language delay.

You can read about signs of autism in children here.

One of the characteristics seen in Down syndrome is a slower development of speech and language. They may also have a lower intelligence quotient (IQ) and several physical features, like a flattened face, almond eyes, small ears, short height, and poor muscle tone.

Does your son react to sounds in general? If yes, his hearing is probably fine, but I would suggest to check with your public health nurse or doctor on this, just to rule out the possibility that your son has a hearing problem. You can do a quick test at home by sneaking up behind him and make a scrunching noise with paper near his ear – see if he turns to that side to find the noise.

Sometimes, language delays can just happen on their own, without any clear cause. In this case, most of the time, with proper treatment the language delay can be corrected.

What you can to do stimulate his speech development

In addition to talking to his healthcare provider, there are a number of ways you can help your son with his speech development.

Talk to your child

Remember that even if he isn’t talking, he is most likely absorbing a lot and understanding far more that you think. Some babies just sit and watch and absorb and do very little talking or trying to talk and then suddenly start chattering away by the time they are three.

The best you can do as his parent is to just encourage him by having lots of conversations with him. Make eye contact and respond when he makes noises, even if they don’t sound like anything. Talk about everything you see when you are at home, or while taking him for a walk.

Ask him simple questions. When doing everyday routines, like dressing up for a walk in the park, ask him for his choices – like what shirt to wear, or which toys to bring.

Make sure you talk in adult talk, not baby talk. “Goo”-ing and “Gah”-ing at a baby is fun but it doesn’t teach them anything more at this age. Name things when you pass them to him. Play games such as “where’s your tummy?” and “Where’s your toes?”. That will help with language development.

Playtime, especially “pretend play”, also promotes language development. Your son will enjoy it more if he plays with you, or with a family member.

Research has shown that children under 2 years old should not have any screen time. This includes watching through the TV, playing with smartphones, tablets, and other handheld screens. Screen time takes away time that your child should be using to interact with people and his environment. This is how he will learn how to communicate with others. The more screen time, the more likely he begins talking later.

In fact ,for every additional 30 minutes of handheld mobile media device use in 18 month old babies, researchers found a 2.3 times increased risk of expressive speech delay. So limit screen time for your son too if you aren’t already!

Limit Your Own Screen Time

New studies show that even parents who have a lot of screen time may indirectly contribute to language issues with their kids. Spending too much time focused on your phone or the TV reduces the amount of time you could spend talking and interacting with your child. This is the best way for him to learn how to communicate with other people.

You’ll find more ideas on how to teach your toddler to talk here.

I’m sure before you know it he will be asking endless “why?” questions and you will be wishing for some peace and quiet!

Do you have a 21-month-old toddler who isn’t talking? Add your comments below or return to Toddler Development.

What Could Cause A Child To Pass Out When Angry?