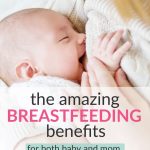 In one way, it can be hard to talk about breastfeeding benefits. The reason is that it can generate so much guilt in new moms, who for some reason, don’t breastfeed. And guilt is far from what makes a happy new mother and baby!

That said, there are real advantages of breastfeeding, both for mom and baby. I am personally quite amazed by all the possible positive effects.

Remember, the benefits don’t disappear if you have to combine breast milk with formula. To really boost your baby’s health, start eating healthy already during pregnancy. 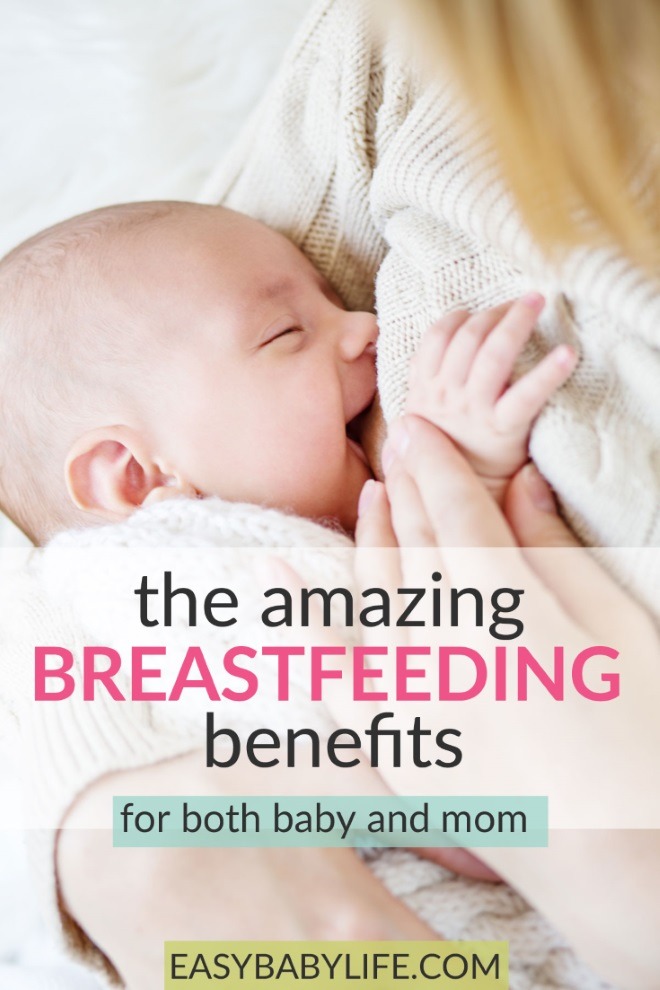 Let’s start with taking a look at the many breastfeeding benefits for your baby. Benefits for nursing moms can be found further down the page.

10 Important Breastfeeding Benefits For Your Baby

Breast milk contains various nutrients and antimicrobial proteins. In addition, it provides immune protection and antibodies from the mother, which protect her baby from illnesses.

It was also shown that the risk of hospitalization for lower respiratory tract infection in the first year is reduced by 72% for infants who are exclusively breastfed for 4 or more months.

According to research, about a third of respiratory infections and half of all diarrhea episodes would be avoided by breastfeeding.

Several studies also indicate a connection between lack of breastfeeding and later development of Crohn’s disease and ulcerative colitis, two serious inflammatory bowel diseases. However, other studies failed to show that breastfeeding protects against inflammatory bowel diseases, such as Chron’s disease and ulcerative colitis. One explanation for these inconclusive results might be differences in definition (exclusive and non-exclusive) and duration of breastfeeding that each study was using. Recent research indicated that breastfeeding, even when combined with formula feeding to some extent, can postpone allergies and asthma.

The breastfeeding benefits of protection from allergy later in life are not entirely clear-cut. However, one extensive study indicates that children that only breastfeed for at least 4 months have a lower risk of developing asthma and eczema during their first four years.

A meta-analysis of studies looking into the relationship between breastfeeding and asthma showed that children with no family history of asthma who were breastfed for at least 3 months have a 27% less risk of asthma than those who were not breastfed.

In children younger than 10 years, who have a family history of asthma, the risk was reduced by 40% if they were breastfed for at least 3 months when compared to children who weren’t breastfed.

There is evidence that children who were exclusively breastfed for at least 3 to 4 months have a lower incidence of eczema in the first 2 years of life.

Regarding food allergies, the results from different studies are still unclear. So, at this point, it can’t be concluded with certainty that breastfeeding can prevent or delay the onset of specific food allergies.

Several studies show that babies who were breastfed for at least 6 months have a higher IQ than other babies. For example, according to a study done in Belarus with a sample of 13,889 newborns, breastfeeding is significantly positively associated with IQ scores at age 6.

Researchers believe that part of the explanation of better cognitive abilities in previously breastfed babies is the bonding between mother and child. Also, fatty acids in breast milk are believed to contribute to the baby’s brain development.

A recent study suggests that the connection between breastfeeding and higher cognitive abilities is false or actually the opposite and that the results are due to the fact that moms with an academic education (and supposedly a higher IQ) tend to breastfeed their babies more.

I guess the jury is still out…

While not unchallenged, several studies indicate a lower risk for adolescent and adult obesity as a breastfeeding benefit. A healthy eating pattern and less insulin in breast milk than in formula are two possible explanations.

It seems there is still no consensus on how much breastfeeding can reduce the risk of being overweight or obese in adolescence or adult life. For example, one study showed that the risk is reduced by 7% in breastfed children compared to non-breastfed. Another study reports a risk reduction of 24%.

However, most studies don’t mention whether this is the case only in exclusively breastfed babies or not. They also don’t describe if and how the duration of breastfeeding impacts the risk of obesity.

It also seems that there is a difference in this impact depending on whether human milk was given to a child by breastfeeding or by the bottle. Some studies suggest that infants fed by bottle, formula, or expressed milk show increased bottle emptying, less self-regulation, and excessive weight gain after 6 months of age than babies who were breastfed.

We can see that there is an association between breastfeeding and a lower risk of obesity in later life. However, we should still be cautious when interpreting how strong this association really is.

A meta-analysis showed that breastfeeding of at least 6 months is associated with a 19% reduction in the risk of childhood leukemia.

According to research, breastfeeding for less than 6 months is still protective, but not as much.
One explanation of why breastfeeding has a protective role against childhood leukemia is that breast milk includes antibodies and has a prebiotic effect that helps promote a healthy gut microbiome. Furthermore, breast milk positively impacts the development of the baby’s immune system.

The reason why breastfeeding may protect against type 1 diabetes is still unclear.

However, one study indicates that the risk of getting type 1 diabetes is 1.5 times higher if a child is introduced to cow’s milk (through, e.g., formula) before the age of 4 months, compared to children who are only breastfed.

One study indicated that the risk of SIDS is reduced by 36% in children who were breastfed compared to those who weren’t breastfed.

However, studies show that breastfeeding must continue for at least 2 months in order to have a protective role against SIDS.

A study indicates that breastfed children cope better with stress later in life.
One likely explanation for this relationship is the bonding rather than breast milk itself. You can learn how to use attachment parenting style for bonding with your baby here, regardless of if you breastfeed or not.

There are great short-term and long-term benefits of feeding preterm babies human milk.

These benefits are apparent while the babies are still in the newborn intensive care unit. It is also reported that babies who were fed breast milk have fewer hospital readmissions for illness in the year after they are released from the intensive care unit.

According to research, extremely preterm babies who were receiving the greatest amounts of breast milk while in the newborn intensive care unit had significantly greater results for mental, motor, and behavior ratings measured at 18 months and 30 months of age. These positive outcomes were shown even for those babies who weren’t fed breast milk exclusively. What matters is that they are predominantly given breast milk.

Premature babies also seem to get special protection from breastfeeding against infections and high blood pressure later in life.

The protection remains for years after you have stopped breastfeeding your baby. And your baby will be protected even if you combine breastfeeding with formula.

The hormone oxytocin, which is released in your body during breastfeeding, helps the contraction of your uterus back to normal. Besides looking pregnant for a shorter period after giving birth, this also means that you may have shorter postpartum bleeding.

There are some interesting emotional, psychological benefits of breastfeeding.

Some studies indicate that the risk of postnatal depression is increased for those mothers who don’t breastfeed or who wean early.

Breastfeeding is linked to stress reduction and more positive feelings in the mother because it promotes the production of oxytocin and prolactin, hormones that are soothing.

Because of its nature, breastfeeding promotes more skin-to-skin contact and increases the physical and emotional bonding between the mother and the baby, which is beneficial for both the mom and the child.

It may seem strange, but breastfeeding mothers seem to be less exhausted than those who feed their babies formula, according to some studies. How in the world is that possible? Well, the breastfeeding hormones may help mom relax and sleep better.

(I know, I know, if you breastfeed right now and feel like you are about to die from lack of sleep, this may seem like a really poor joke. I breastfed both my babies, so I can’t personally tell if there really is a difference. This is what research studies claim. You are more than welcome to share your thoughts on this by leaving a comment below. :-) )

According to some sources, breastfeeding can help nursing mothers to burn around 500 calories more every day. So unless you “eat for two,” breastfeeding may help you lose some weight. A nice breastfeeding benefit!

For more tips regarding losing weight while breastfeeding, read this article.

Some studies indicate that the risk of getting both breast and ovarian cancer is reduced through breastfeeding. The lower estrogen levels during the period of breastfeeding are likely to play a role.

When it comes to the risk of ovarian cancer, it was shown that the risk is reduced by 21% in nursing mothers compared to those who never breastfed. However, because there were differences in the reported duration of breastfeeding in different studies taken into analysis, this data should still be interpreted with caution.

There are conflicting results in different studies regarding breastfeeding and osteoporosis. Mothers lose some bone density during the breastfeeding period, but this appears to be reversed after weaning.

Some studies indicate a lower incidence of osteoporosis later in life among women that have breastfed. On the other hand, some studies report that lactation doesn’t seem to impact long-term changes in bone mineral densities.

A study from 2014 indicates a lower risk of diabetes type 2 for moms who breastfeed their baby for at least 6 months.

However, it was shown that breastfeeding had no significant effect on the already increased risk of diabetes in women who have a history of gestational diabetes.

If breastfeeding works, it is very convenient and economical compared to formula. It is also environmentally friendly…

This was a long list of breastfeeding benefits for mom and baby, right?! When I did the research to complete this list, I decided to postpone the introduction of solid food for my baby.

But at some point, it is time for solid food. Fun, exciting, and greasy. For lots of baby feeding tips, click here.

If you want to learn more about what breastfeeding can do for your baby, and how you can breastfeed to prevent or mitigate colic, how you can affect your breastmilk supply with herbs and your diet and much more, check out the book Mother Food: A Breastfeeding Diet Guide with Lactogenic Foods and Herbs – Build Milk Supply, Boost Immunity, Lift Depression, Detox, Lose Weight, Optimize a Baby’s IQ, and Reduce Colic and Allergies. Great book, longest title ever! :-) (Link goes to Amazon.)

How To Get Breastfed Baby To Take Bottle?

Baby Using Breast as Pacifier: 2 Efficient Ways to Stop It

Weaning from Breastfeeding Gradually or Quickly Without Any Tears