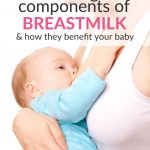 We have all heard how great breast milk is for our babies. Breastfeeding has been proven to give the baby a whole slew of benefits.

So what are the components of breast milk that make this magic liquid work so well? 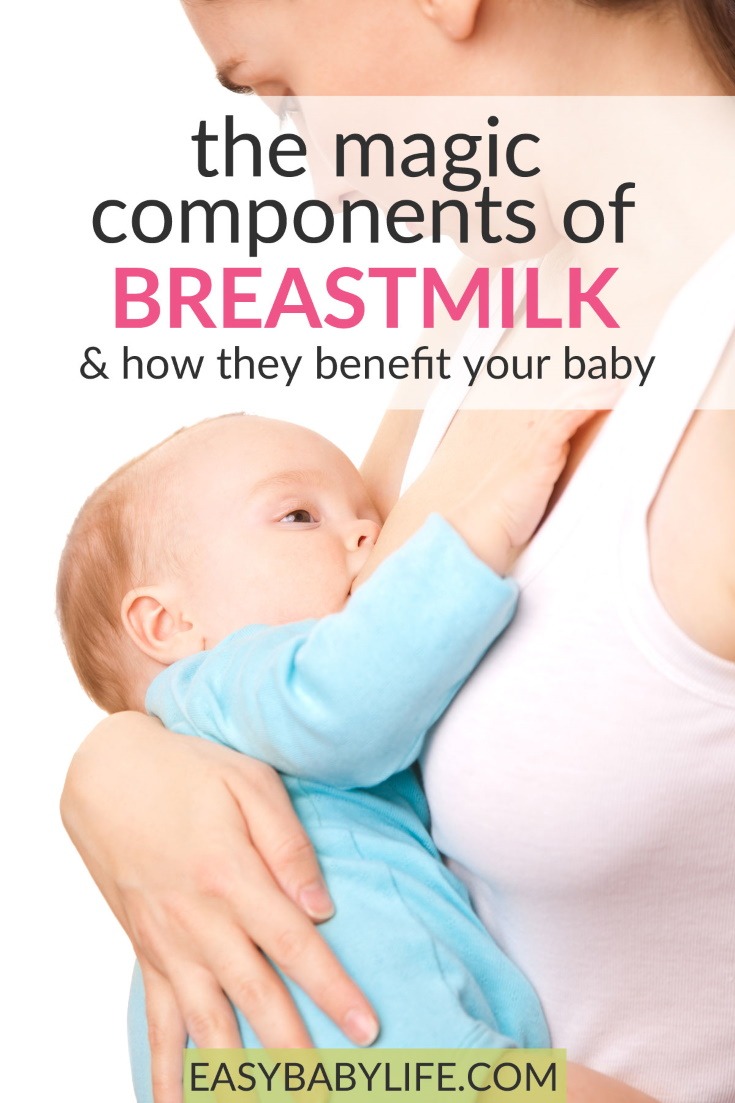 Actually, the content of human milk is not completely known. (Hello, is this the 21st century??)

Well, human milk is a complex substance and it changes over time.

The milk in the picture is regular “mature” breast milk, which is a yellow-white liquid and will even change within one feeding. Thinner in the beginning, and fattier and thicker as the breast is emptied (the so-called hindmilk).

Later in the article, you can see the change of breastmilk over time – from the colostrum when your baby is newborn, the regular breastmilk.

The list of known breast milk components not present in formula is long and includes hormones, enzymes, growth factors, and substances that fight infection and help develop the immune system.

Below you’ll learn about the most important components of breast milk so you know what you are feeding your baby when nursing.

The (Known) Components of Breast Milk

One large component of breastmilk is protein. In fact, there are two types of proteins found in human milk, called “whey proteins” and “casein proteins.” This is one of the things that formula companies try to reproduce.

Compared to human milk, protein in cow’s milk has a much lower proportion of whey protein, only 18%. In addition, because some infant formulas are high in casein, they are harder for the baby to digest.

One specific protein found in breastmilk is Lactoferrin. This protein is great for your baby’s intestinal tract. It prevents the spread of potentially pathogenic bacteria and prevents illnesses. Unfortunately, there is little to no Lactoferrin found in formula.

Lysozyme, an antimicrobial enzyme, is found in mother’s milk but not in formula. This substance has an important effect on which type of bacteria can survive in the intestinal tract. Interestingly, the level of Lysozyme in breast milk is not affected by what mom eats – probably because it is so vital for the baby. There is no or very little Lysozyme in formula.

The Bifidus factor in human milk supports the growth of Lactobacillaceae, which are beneficial bacteria that protect the baby against harmful bacteria and parasites. There is a difference between the bacteria found in the guts of the breast- and formula-fed infants. Breastfed babies have a level of lactobacillus that is much higher than that of formula-fed infants.

Several types of carbohydrates can be found in breast milk. Carbohydrates give us energy, and they are essential for an infant’s growth.

Oligosaccharides are one of the most abundant solid components of human milk. Human milk oligosaccharides are prebiotics that feed the beneficial bacteria in a baby’s gut. They play an essential role in the development of the infant’s microflora and immune system. In addition, they have anti-inflammatory, anti-bacterial, and anti-viral effects and protect against various infections.

Colostrum has the highest level of oligosaccharides. These levels decrease in mature milk.

Infant formulas don’t contain oligosaccharides. However, there are components added to formulas that may mimic the effect and function of the prebiotic from mother’s milk. There is some evidence that shows that the addition of prebiotics to formula can make the gastrointestinal microbiota of formula-fed babies more similar to that of breastfed babies.

Lactose, which is a very important carbohydrate, is supplied richly from breast milk. This component is wonderful for brain function and growth. Lactose helps decrease the number of unhealthy bacteria in the stomach and improves the uptake of calcium, phosphorus, and magnesium. Lactose concentration in breastmilk increases over the duration of breastfeeding.

Breastmilk also contains beneficial fats. The fat level in mature breastmilk is around 4% or a bit less and is independent of what mom eats. However, the type of fats can be affected by the maternal diet.

Fats supply energy and help the central nervous system to develop. Mainly, Omega 3 fats such as AA, DHA, and EPA. These fats play an important role in infants’ cognitive development and motor systems development. They ensure that the baby’s immune system functions and help the baby take in fat-soluble vitamins. They are also important for regulating growth, vision, and inflammatory responses.

The fats found in formula are not digested completely by the infant. Previously, formulas didn’t contain DHA. However, DHA and ARA (arachidonic acid) are added to most formulas nowadays. At the moment, there is still some controversy around it. There is still insufficient evidence to conclude whether adding DHA and ARA to infant formulas will have a significant beneficial effect on brain development in babies.

Some concerns are being raised about the safety of adding these two components to baby formula. So naturally, some parents fear the potential health risks. But, so far, there are no reported harmful effects of DHA and ARA on infants.

Whether to use a DHA and ARA supplemented formula is, at this point, still a complex decision for many parents. We need to wait for more information on this topic to get a better idea of the potential benefits and risks (and if there are any).

While carnitine is present in both breast milk and formula, the carnitine in human milk is easier for the baby to take up. Breastfed babies have significantly higher carnitine levels than their formula-fed counterparts. Carnitine is necessary to make use of fatty acids as an energy source.

Breast milk is also rich in immunoglobulins, and while formula does contain these, it’s not the same kind as those found in human milk.

Mother’s milk immunoglobulins play an essential role in the maturation of the baby’s immune system. They also protect against pathogens. This is really important because newborns don’t produce their own immunoglobulins at an early stage of life. Instead, during that time, they use immunoglobulin G (IgG), which was transferred from the mother’s circulation through the placenta.

One important type of immunoglobulin is called secretory immunoglobulin A (sIgA). It has the ability to bind to foreign substances (including harmful bacteria), so they can be eliminated from the body. sIgA particularly protects the throat, nose, and ears as well as the gastrointestinal tract.

Colostrum, the thicker milk that a mother’s body produces in the first few days, is especially high in sIgA.

Leukocytes are the white blood cells that are only found in breast milk, not in formula. They help fight infection. It is the antibodies, enzymes, and hormones that make breastmilk ideal.

Through breastfeeding, the immune factors continue to be transferred from the mother to the baby. This protects the infant from infections and helps the development of the baby’s gut microflora and their own defenses. Formula doesn’t offer this protection and can’t adjust to the baby’s needs.

The vitamins in mom’s milk depend on the vitamins the mother is getting. This is why it is so important that the mom gets the vitamins she needs. She will be sharing them.

The vitamins and minerals in the mother’s milk are absorbed readily by the baby. For example, the iron content of human milk is pretty low, and it is lower than iron levels in supplemented cow milk formulas, 0.5 mg/L compared with 10 to 12 mg/L. However, babies absorb only around 7 to 12% of the iron in formula, but they absorb up to 50% of the iron in mother’s milk.

Although breast milk contains adequate amounts of most vitamins needed for normal development, it doesn’t contain enough vitamin D and K. The risk of vitamin D deficiency is even higher in climates with less sun because sunlight exposure also increases vitamin D levels. That is why vitamin D supplementation is recommended for infants.

However, even when the baby is formula-fed, it shouldn’t be automatically concluded that they receive enough vitamin D. The daily amount of formula that the baby eats should be taken into account. According to some recommendations, formula-fed babies should take vitamin D supplementation until they start eating 32 ounces (1 liter) vitamin D-fortified formula a day.

Vitamin K has an essential role in blood coagulation and stopping bleeding. Its levels in human milk are inadequate for an infant’s needs, even if the mother takes vitamin K supplements. Vitamin K supplementation for the baby is also needed. For example, the American Academy of Pediatrics recommends that all babies, no matter if they are breastfed or formula-fed, receive a one-time intramuscular shot of vitamin K1 shortly after birth, which is usually given during the birth hospitalization.

Learn more about what to eat while breastfeeding here.

Components change as your baby grows 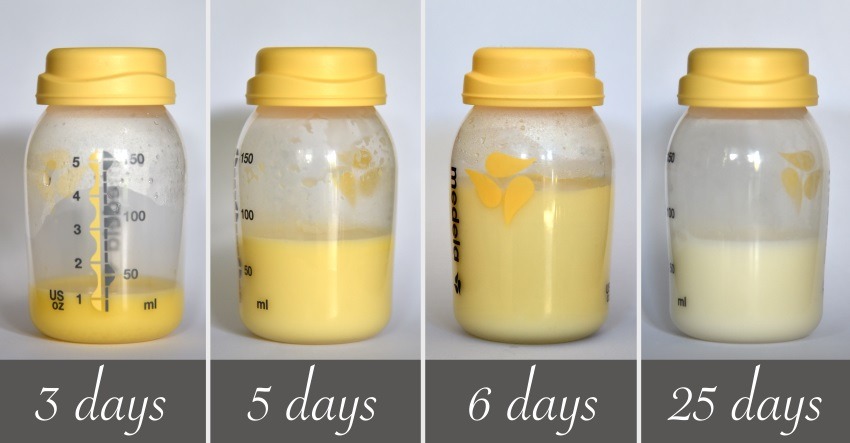 The greatest thing about breast milk is that as your baby grows, the components automatically change to supply your child with what is needed most as she grows.

The very first milk, the colostrum (seen to the left in the above picture) is much thicker, more yellow and sticky and contains a very high concentration of immunoglobulins sIgA, to protect the newborn baby from infections.

A newborn infant tends to eat very little. Just a teaspoon is a typical feeding and enough colostrum to provide large amounts of immunoglobins.

The same is true with lactoferrin, a protein that for example has antibiotic effects.

Although breastmilk is the golden standard when it comes to a baby’s nutrition because of its numerous benefits, formula feeding may sometimes be necessary. Some mothers can’t breastfeed at all for a specific reason. Others may need to temporarily use formula in addition to breastfeeding, for example, because of the delay in the milk supply coming in or inadequate milk supply.

In one study, researchers studied babies who had lost a significant amount of weight after birth. They randomly assigned them into one of the two groups. One group was given a small amount of early limited formula after each breastfeeding until the mother’s milk was fully in, while the other group didn’t get any formula. It was shown that the babies who were given a small amount of formula after breastfeeding were less likely to be readmitted to the hospital. The results also showed that the addition of early limited formula didn’t interfere with breastfeeding and didn’t lead to significant changes in intestinal microbiota. For example, the abundance of Lactobacillus or Bifidobacterium wasn’t decreased.

As we can see, even though breastfeeding provides the best nutrition for the baby, sometimes formula can be used as a tool that can help both the baby and the mother.

Although formula can’t identically mimic breast milk and all of its beneficial components, formulas are continuously improved in order to be as effective as possible when it comes to optimal infant growth and development.

Mayo Clinic. (2020, May 23). Does my baby need a vitamin D supplement? https://www.mayoclinic.org/healthy-lifestyle/infant-and-toddler-health/expert-answers/vitamin-d-for-babies/faq-20058161

How To Lose Weight While Breastfeeding – Pros, Cons & How-to