It can be quite stressful when your baby seems to be crying more or less throughout the day. But when separation anxiety rather than illness is the reason, there are great ways to improve the situation quickly. Here’s how! 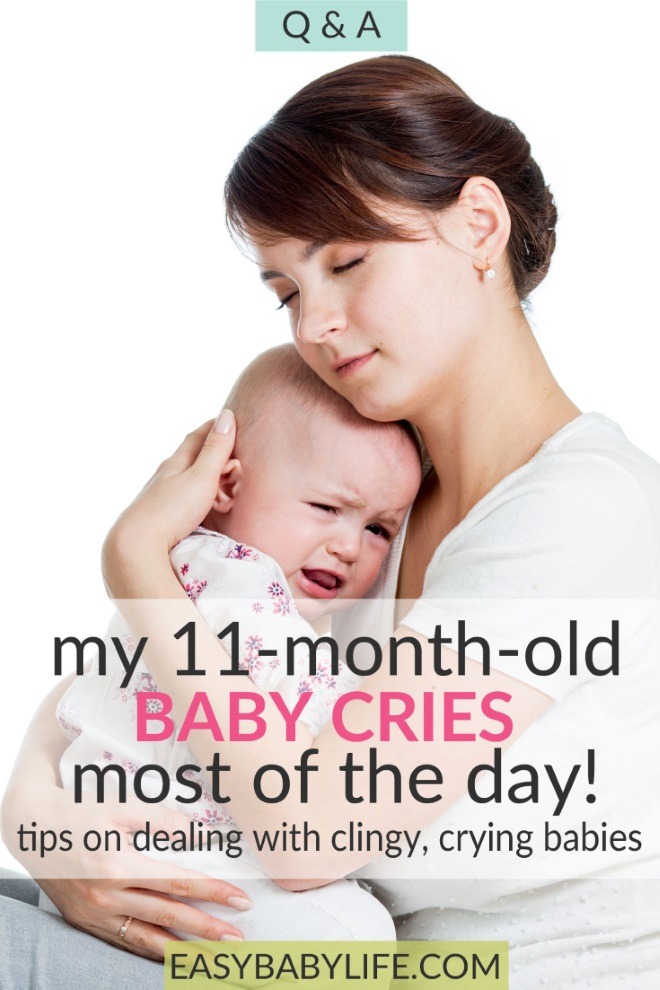 My 11-month-old baby cries most of the day. I am tired and worried. Here’s some backgroud:

He is a beautiful healthy 11-month-old baby boy, but he is so cranky all the time but mostly only in the presence of myself and my husband.

He is so attached and won’t let me do anything. He wants to be picked up and carried constantly and unless we are in the room, bear screams at the top of his lungs.

I get so upset and tired by it. I want him to be happy and independent. Sometimes I stay with him but don’t pick him up, but he just cries and cries until I can’t bear it and end up picking him up. Tears come rolling down his face.

His grandparents say he is as good as gold when they look after him, so I know that nothing is wrong with him. I don’t know how to break the habit of picking him up. My neighbors must think I have a nightmare child and it’s impossible to leave him to cry when he is in that state.

Please advise. He is my first child. He’s not crawling either and I think he is frustrated by that as he wants to move but can’t despite me putting him on his tummy from a very young age every day. I am so worried about him. I need help!!!

What To Do When Baby Cries Most of the Day

Your stress transmits to your little boy and he will react by panicking when you go out of the room. And too bad about your neighbors, it is not their business. You must not worry about what others think (including parents!). Your job is to have fun with your baby and enjoy him, and that is the best thing for his development.

Pick him up or play on the floor

Some babies are more clingy than others, and it just means they need more cuddles and reassurance. If you can manage a backpack or sling, he would probably love traveling around with you as you chat about what you are doing.

I am not a believer in leaving babies to cry for long. It doesn’t hurt a baby to cry a bit with frustration, but it does sound like your little fellow is stressing out too much. If he has to get distressed to get picked up then it is being reinforced. You are then literally teaching him that he needs to cry really loud to make you pick him up!

It is much better than you pick him up lots at other times too, and get down on the floor with him to play so he builds confidence.

Make it a game rather than a struggle between you. If you are going to him feeling resentful and frustrated then he is picking up on that and feeling insecure.

Stimulate his crawling – here’s how

He will crawl eventually – or maybe he won’t! Some babies actually start to walk before starting to crawl. But at this stage, being left on his own on his tummy is scary and frustrating, and although a certain amount of frustration causes babies to reach that bit further and pull themselves up, he will only do that when he feels confident. And if he has got fearful you are going to go away, or are out of reach he will just stress out.

You can encourage him by putting toys just out of reach but you stay with him, smiling and encouraging him. Play rolly-polly games on the floor with him, and peek-a-boo games so he knows you are coming back.

Don’t worry, he is just at the age where babies are often clingy and hate Mom disappearing. This is called separation anxiety and is a sign of development in a child, not the opposite.

He will grow out of it, just enjoy him and have lots of interaction with him. Babies gain independence much quicker by having lots of attention and play than they do being left on their own to try to achieve control. The separation anxiety cannot be mitigated by the baby being left alone, but rather the opposite. The more their needs to be close are fulfilled during this phase, the faster the phase will pass.

Learn more about 11-month-old babies and how to play with them here.

Why Is My Baby Screeching? Learn About Reasons and How to Stop it!

4 Month Old Cranky In The Evenings

Baby Is Always Crying – I Don’t Know Why!