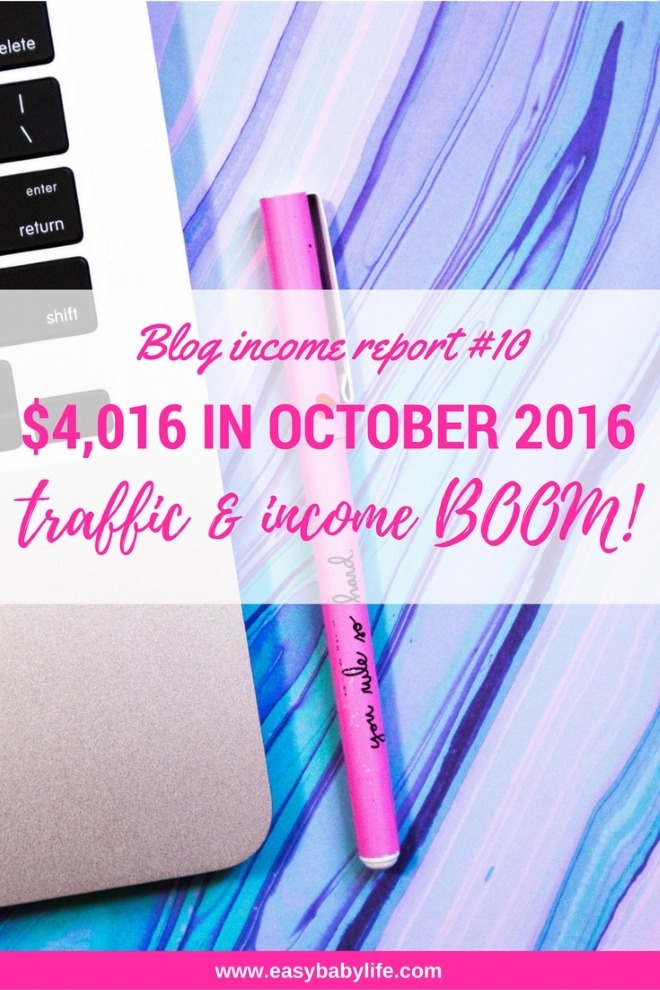 October was… amazing. In September, I earned more than $2,000 in one month for the second time ever. Pinterest started to deliver. October took it all to a whole new level. Traffic BOOMED. Income soared. I am so grateful. So happy! Also, I have started to connect with both my readers and other bloggers. It is SO. MUCH. MORE. FUN!!!

It never occurred to me back in January 2016, that focusing on making a business out of this blog would help me connect better with readers and bloggers. I thought I would hopefully earn a bit more money, but that was it. Now I am here with new friends, many new followers on both Pinterest and Facebook, more comments on my blog and seriously much more fun! I have always loved blogging and parenting, but trying to be more serious in terms of income takes this to a whole new level. Love it!

Now, let’s see how I did with Easy Baby Life during October!

Total costs – $371 Pretty high due to the course and the VA services. But I am INVESTING in my business, so these are all intended costs that I am totally happy with!

My Investment in Making Sense of Affiliate Marketing

In August, I invested in Pinterest, this month I took the plunge into affiliate earnings. This is another step to turning my blog into a business. If I was hesitating to invest in the Pinterest course, I was even more so for a class on affiliate earnings. I KNOW what affiliate earnings are. I’ve been using affiliate links for 10 years. I did not want a beginner’s class telling me that I need to sign up for affiliate networks. I already know that!

So I looked around for something more advanced. Obviously, since I don’t really earn any affiliate income, I am not doing everything right. (Or anything…) Let me tell you, affiliate marketing courses are a jungle! Everyone and his uncle want you to spend money on their class. After checking content, reading reviews, asking other bloggers and checking out the actual course providers, I decided – with hesitation – to sign up for the course Making Sense of Affiliate Marketing by Michelle Schroeder-Gardner. She writes that her course is not only for beginners but also for those who had failed as affiliate marketers so far. (LOL, that’s definitely me!)

She also had a money-back guarantee, which is an absolute must for me!

I got the course, started it, and… was super disappointed! It went on about what is affiliate marketing, that you have to nofollow the links and other super-basic stuff. Duh.

But then, as I continued with the class, and overcame my hesitation, I came to modules that were much more targeted MY situation, and with tips that I had obviously not implemented at all.

In the past 4 weeks, my affiliate income has tripled! It is without a doubt because of the tips that Michelle shared. I have SO much more work to do and affiliate income is still pathetic. But it is increasing and I have a plan. So I take back my disappointment completely. The course is great, and the Facebook group that comes with it is completely amazing too. (And the course has almost already, after four weeks, paid for itself through my increased affiliate earnings.)

If you want to check this class out, you have it right here!

Now, let’s have a look at traffic numbers and finally RPM for the month.

Here are some screenshots from Google Analytics to show my traffic for October 2016.

At the beginning of August, I decided to do something I almost never do. I bought an online class to learn how to drive traffic to my blog with Pinterest. After quite a bit of hesitation and research, I decided to get Melyssa Griffin’s Pinterest growth course – Pinfinite Growth. It took less than a week before I started to see results. A few weeks later, it got even better:

You can see my traffic sources here below. 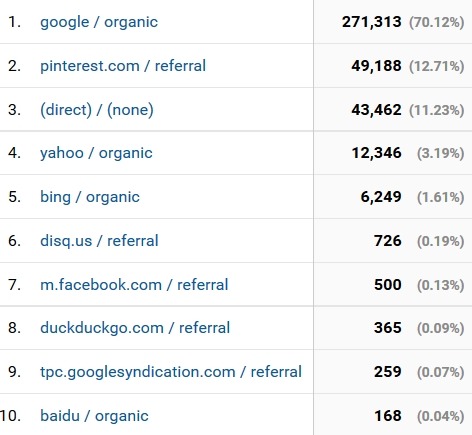 The Traffic from Google

As you can notice, I am very excited about Pinterest taking off. But for October, Google should definitely be mentioned too. My traffic from Google increased by 46% or over 85,000 page views. That is massive for an established blog in just one month. So what on earth happened? Well, Google can be quite unpredictable, but during October, Google released a new version of its “Penguin” update. Google Penguin is all about a blog’s link profile and aims at penalizing sites that spam, buy or sell links or have an unhealthy link profile in any other way. And as some sites go down, others go up. Easy Baby Life started climbing immediately after Google announced its Penguin update.

When I started blogging 10 years ago, gaining traffic to your website was all about SEO (search engine optimization). Social was almost not invented. Facebook actually launched in February 2004 but was not a big thing for bloggers (at least not where I hung out) at that time. Pinterest launched in March 2010.

So I learned SEO. SEO in 2016 is both similar and very different to how it was 10 years ago. I think it is much more difficult to rank today, but actually, it should be! Back then, there were many stupid things you could do that was only for Goggle and not at all for your readers. (There still exist things like that but to a much lesser extent – or at least with a much weaker result.)

If you want to learn more about SEO, you can check out this extensive online course. It is 5.5 hours of up-to-date SEO knowledge worth going through. (NOT for the super-advanced SEOer, but for those who want to learn a lot about SEO in a pedagogical way.) There is a huge Black Friday deal running on this course right now through my link. Hurry up to grab it!

This is a nice improvement compared to September and the first time ever over $8. It is driven by higher, higher traffic and somewhat improved affiliate earnings.

Now, after getting Pinterest in order, the next step will be to continue working hard on my affiliate earnings, with the help of Michelle’s course. Stay tuned. :-)

That was all for my October 2016 blogging income report! I’d love to hear any thoughts you may have on this. Please share by leaving a comment below! :-)