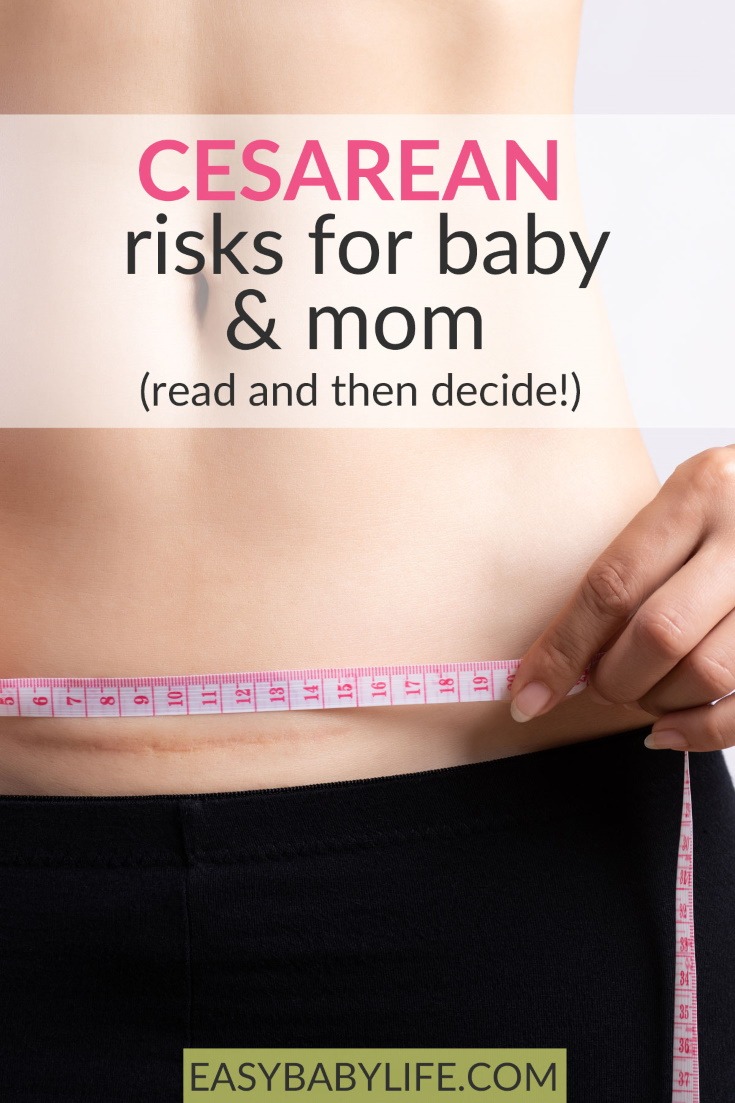 It is important to weigh up the pros and cons of a C-section and decide if it’s right for you. Different strokes for different folks.

In this article, I go through the cesarean risks for baby and mom according to research. You might be surprised to learn about some of risks. I know a was.

Cesarean births account for around a quarter of all deliveries in the US today. That’s about double the rate of surgically assisted births thirty years ago. In some US hospitals, c-section rates are as high as 50%!

So why the rapid increase?

Interestingly, back in the 1980s, cesarean births were prevalent among the lower classes and in deprived areas, yet today, we live in a “too posh to push” nation where elective surgeries are common among the rich and famous. And why? Well, labor, by definition, is hard work and unpredictable work too!

Also, many of us believe that cesarean risks are lower than the risks of vaginal birthing. (Well, sorry, that is not the whole truth.)

C-sections are major surgical procedures and they carry the associated risks of such surgeries. Of course, emergency and planned c-sections for medical purposes are without a doubt safer for both Mom and baby than a vaginal delivery, but if you’re considering an elective c-section birth it’s important to understand the cesarean risks when compared to a natural vaginal delivery.

In this article, you can read about the main risks for baby and mom associated with c-sections. We don’t mean to scare you but believe strongly that knowing is always better than guessing…

Get immediate expert help with your pregnancy questions through JustAnswer Pregnancy:
Start a chat with an OBGyn/Pregnancy Expert Now

Cesarean Risks For Baby And Mom

Research seems to indicate a definite link between respiratory disorders and cesarean births. Studies have found moderate increases in asthma and allergies in c-section babies.

One study found the risk of respiratory distress to be a whopping five times greater in newborns who had been born by cesarean section, leading to life-threatening conditions. Sadly, a further study concluded that ‘those delivered by elective cesarean section around term have an increased risk of overall and serious respiratory morbidity’.

The same findings were not found in babies born via emergency c-section, leading to the suggestion that it’s all down to timing. Emergency surgeries are usually performed after a problem arises during natural labor when the baby is ready to be born.

Elective surgeries are usually performed between 37 and 39 weeks gestation. With a ‘normal’ pregnancy generally progressing to around 40 weeks, it’s possible that some infants do not have lungs that are mature enough to cope with unassisted breathing prematurely.

We all know that there are risks with any surgery, whether that be a quick and simple ‘lunchtime’ procedure, cosmetic surgery, or a major surgical procedure. Anything that involves anesthesia is always going to carry risks.

Fortunately, the risks are quite small and often related to existing medical conditions such as high blood pressure and obesity. However,  there are some additional risks associated with cesarean sections.

Firstly, after a cesarean, you are going to be left with a huge abdominal scar. There’s no sugar-coating that fact. To extract a 7lb baby from your uterus, a big incision needs to be made – this isn’t keyhole surgery! As with any scarring, there’s a risk of wound infection.

Wound infection is reported in 2-16% of women following cesarean births, with 7.8% of women having significant infections requiring extended hospital stays and increasing the risk of postpartum morbidity.

During the surgery, due to the proximity of the bladder to the uterus (babies have a tendency to squash all your internals together as they grow), there is a significant risk of bladder injury. Studies have also found that this risk increases with each subsequent cesarean delivery.

Bladder injury can mean that further, intrusive surgery may be required. It may be very difficult or painful to urinate, a catheter might be required, and the risk of ongoing bladder infections increases.

With all associated cesarean risks added up, the risk of maternal morbidity following a cesarean is greater than following a natural vaginal delivery. One study reported figures as a 2.73% risk vs a 0.9% risk respectively. The difference isn’t earth-shattering, but it’s certainly worth considering these numbers.

If you are considering a cesarean delivery, it’s important to think about how any future pregnancies may be affected.

The risk of abruption during the second pregnancy in women who had a previous cesarean birth is thought to be around 0.95% and 0.74% for those with a previous vaginal delivery. Two cesarean births bring this figure up to 30% for third pregnancies.

A further study has found that unexplained stillbirths at term are twice as likely if the mother has had a previous cesarean birth as for women with previous vaginal deliveries.

Mother-baby bonding following birth is extremely important, and it’s why skin-to-skin contact immediately following a vaginal birth is recommended. This skin-to-skin time doesn’t happen as quickly following a cesarean birth as the surgery needs to continue, so can a C-section affect the bonding process?

Research reports that mothers who had a cesarean birth took longer to bond with their newborns than those who had a vaginal birth. The differences also seem to persist for several months after birth.

One study concluded that cesarean mothers have much less contact with their infants in the first 24 hour period. This has to do with the effects of the anesthesia and fresh scarring that make it difficult for new Moms to meet all the needs of their newborn such as soothing and changing.

A further study found that 78% of cesarean mothers report very high levels of pain in the first 24 hours following birth. This is something that has a negative impact on infant care and breastfeeding.

Since breastfeeding and skin contact are so important for bonding, a sense of failure in this area can slow down the bonding. Don’t forget that emotions run high during this major life event.

Should I Consider An Elective Caesarean Delivery?

If a C-section is required for medical or emergency purposes, there is absolutely no question that the safest option for both you and your baby is to undergo the procedure.

Even if you’ve had your mindset on natural birth, remember that Moms who have vaginal deliveries don’t get a medal. Once you’ve got your baby, parenthood is equal, it doesn’t matter how you did it.

If, on the other hand, you’re considering elective surgery, that’s fine as long as it’s what you want – and in my view – you are aware of the cesarean risks.

Although bonding may take longer, research doesn’t tend to find any lasting effects. (And who knows what’s actually true or not. There are plenty of Moms who delivered naturally who didn’t feel an instant rush of love for that screaming, needy little person who just tore them from back to front!)

It is important to weigh up the pros and cons of the surgery and decide if it’s right for you. Different strokes for different folks.

As a start, have a look at the two videos below. One is showing a normal (not emergency) elected c-section. Everything went well and the mom explains her choices and feeling about it.

The second is from “The business of being born”, the information series produced to take a deep look at the whole birthing business of the US. Definitely worth spending a few minutes on!

Kelly's C-Section
"The Business of Being Born" 2007 Trailer

If you want to get this video, you’ll find it on Amazon here.

Books And DVDs On Childbirth

There are many excellent books and courses to learn about giving birth. If you are still not sure whether to go for a planned c-section or vaginal birth, the following books and DVDs are highly recommended:

Can Water Birth Put Your Newborn At Risk (Acc. to Research)?