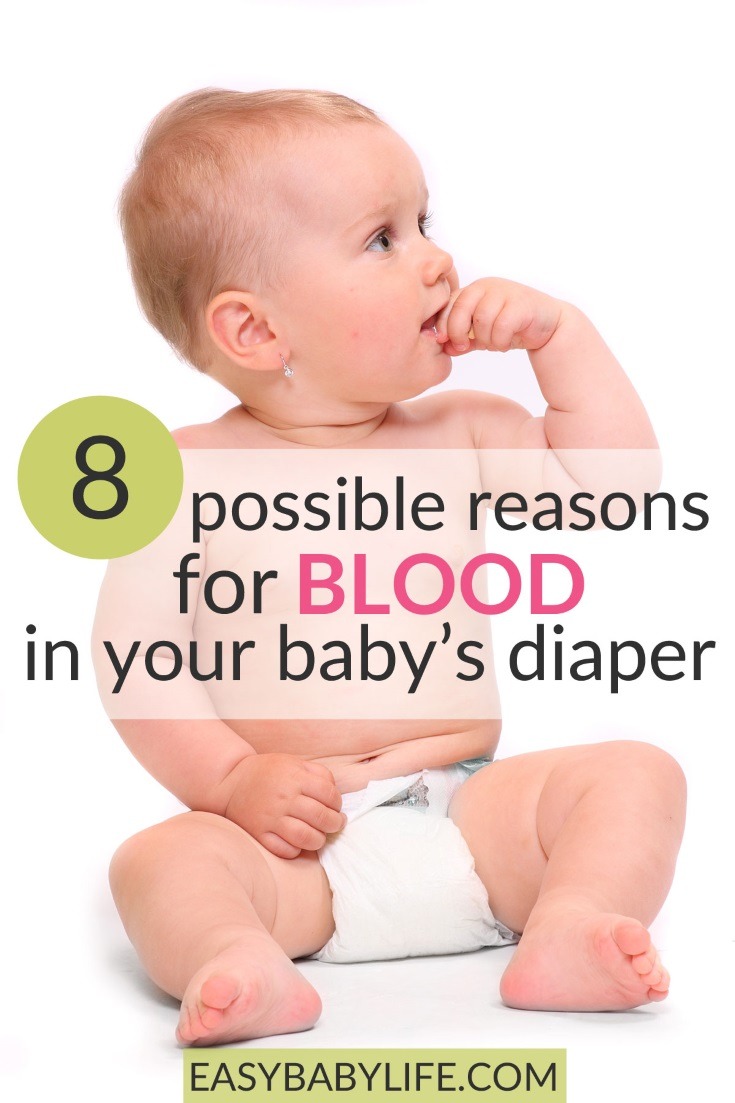 Pin
Question:
My daughter in law just called and her daughter 6 1/2 months old had some blood from her vagina after she changed her diaper. Is this normal or what could the cause be? She is quite upset right now.

Why You May Find Blood In Baby’s Diaper

I’m not surprised your daughter in law is concerned, she could be imagining all sorts of things. It can sometimes be difficult to know the source of the blood when found in the diaper.

2. Newborn hormones – Newborn babies do sometimes have a little bit of vaginal bleeding due to all the hormone changes. At 6 months, this should not be the reason, but it is still good to know.

4. A wound – A little girl could also have a small wound somewhere from being naked and sitting down on something. How active is your grand-daughter? If she is crawling around and climbing over things, maybe she didn’t have a nappy on and had a minor injury?

5. Straddle injury – A so-called straddle injury is also common in children. It happens when a playing child falls and lands a genital area over a hard object, such as a bike frame, an armchair rest or a side of the bathtub. But this is a less likely possibility in a child who, like your granddaughter, does not walk yet.

6. Diaper rash – Sometimes there can be diaper rash that has bled a bit. It can be hard to see where it has come from, it may look like it was from the vagina, but babies kick around a lot and wriggle and it could have come from elsewhere.

8. A foreign object or abuse – A foreign object, such as a toy part or a piece of toilet paper is also known to be a cause of vaginal bleeding in baby girls. Sexual abuse of the child could also result in bleeding. Hopefully, that’s completely irrelevant for your grandchild’s situation, but you can read about signs of sexual abuse in babies and toddlers here.

I would get the bleeding checked just in case there is some infection or injury. The doctor will be the best person to diagnose anything in this case.

A final tip – an excellent reference book to keep at home for first info on possible illnesses in the baby is Caring for Your Baby and Young Child, 6th Edition: Birth to Age 5 by American Academy Of Pediatrics. (Link goes to Amazon, where you can check it out.) Maybe an appreciated gift for your daughter in law.

Good luck, your daughter in law is lucky to have such great support from you,

More Babies With Blood In Their Diapers

Did you ever find blood in your baby’ diaper or have some tips to share? Add your comments below or return to Sick Baby Q&A.