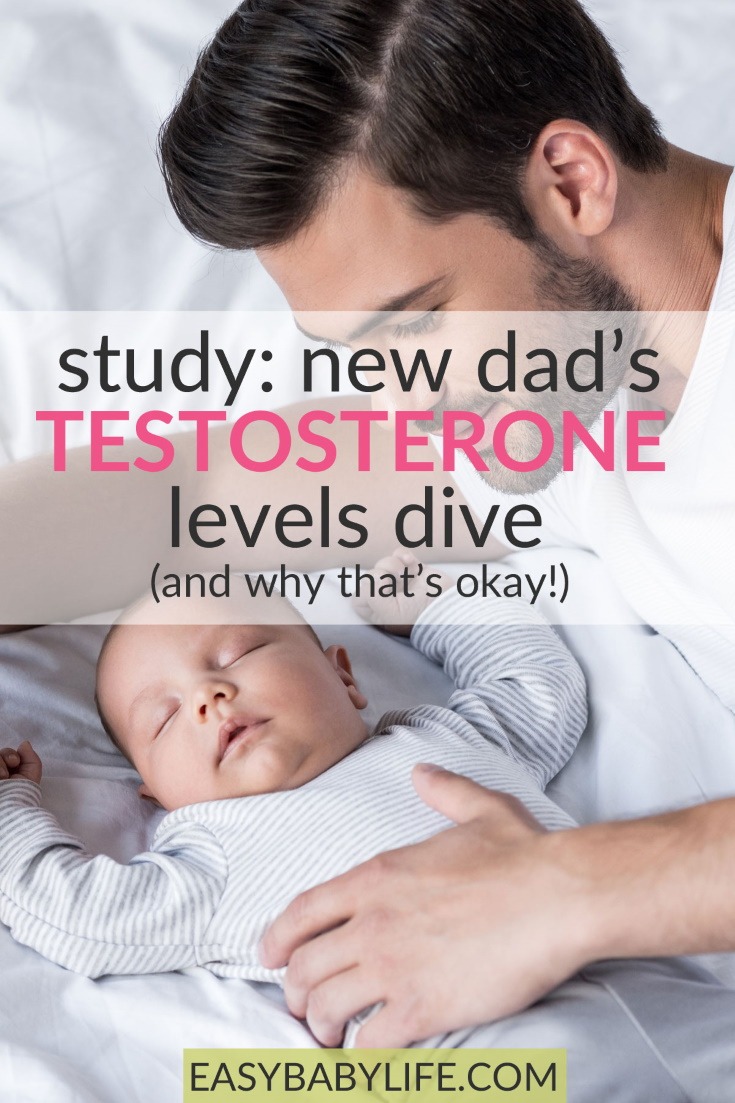 Entering into fatherhood, new dad’s testosterone levels fall sharply, according to a few studies. By that, the new dad is likely to be a bit calmer, more caring and less interested in sex – all to secure his interested in his offspring according to the researchers.

Once in a while, these “news” reach media, and the debate starts running wild. Some make fun of the dads, others defend them. “Dads are only half men”, “Never have children”, “Plans to restore dad’s testosterone levels” are just some of the views and jokes on the topic.

OK, so some researchers finally got the idea to check not only moms’ hormone levels but those of New Dad. And surprise – dad is affected too.

It has been known for ages that mom is affected in many ways by both pregnancy and breastfeeding hormones. (You can read about the breastfeeding hormones here.) Some of the effects on mom are that she becomes calmer, more caring, and less in the mood for making love. Anyone calling Mom less of a woman? I wouldn’t think so!

Why then is it so traumatic to find out that new dad is affected in a similar way? Lower testosterone levels mean that dad becomes calmer, more caring, and less in the mood for making love…

Does anyone more than I see a pattern here? :-)


Let’s take a deeper look at what this study found and what it might mean for the new parents.

This first-ever large and long-term study of hormonal changes related to fatherhood showed that men who take care of their children have lower testosterone levels. According to the researchers, this appears to be Mother Nature’s way of making the dads less aggressive and more caring.

The large 5-year study, published on September 13, 2011, by PNAS, found that a new dad’s testosterone levels fall sharply (34%) when bringing home the baby. The effect is dramatic, quick, and long-term. Five years later, the dads still had lower testosterone levels before the baby arrived.

Another smaller study found that a man’s testosterone level fell within minutes after starting to interact with his child. No other life event has been found to change male testosterone levels this dramatically.

Testosterone Falls To Protect The Baby

Testosterone affects a man’s muscle size and strength, bone growth and strength, sex drive (libido) and sperm production to mention some. It also keeps belly fat off the male body, helps to keep spirits up, and increases aggressiveness.

The researchers think that the falling testosterone levels are Mother Nature’s way of protecting the offspring from male aggressiveness and also facilitating a caring mindset for the dad. This phenomenon is seen in mammals in general and has now also been documented among humans.

So new dad, who used to be a well-built, energetic hunk with a high sex drive, transforms into someone weak, fat, asexual, moody, and wimpy when bringing home his baby?

Sounds pretty similar to the transformation new moms go through…

One study from 2004 confirms that each new baby increases a man’s risk of obesity by 4 percent. (For women, the risk increases by 7 percent.)

The researchers concluded that eating and exercising behavior changes are behind these risks, but maybe it is actually partially a hormonal effect? The big study discussed above did confirm that the testosterone levels remained low for a long time, so I find it reasonable to believe that they may be involved in the weight gain too.

Some other recent research indicates that male hormone levels may very well change already during pregnancy, with weight increase as one of the side effects (an effect known as couvade syndrome or sympathy pregnancy, which you can read more about here.)

The Libido Becomes Lower Too

Most new parents can confess that while having a baby is the best that ever happened to them, there are definitely side effects that are not that great. Sex life suffers, no doubt.

A study by psychologist John Gottman published in 2000 in the Journal of Family Psychology found that as many as two-thirds of couples experience a significant decline in marriage satisfaction, including less-frequent or less-satisfying sex, more conflict and more emotional distance, after the first baby arrives.

For new moms, breastfeeding skyrocket prolactin levels, which in turn suppress both fertility and libido. The reduced levels of testosterone obviously may have a similar effect on men. No wonder sex life is virtually nonexistent among many new parents.
(Sex life during breastfeeding is discussed and debated in this article.)

New Dads Are At Risk For Postpartum Depression

New dads, just like new moms, are at risk for postpartum depression. A study published in 2010 showed that 1 out of 10 new dads develop postnatal depression. The researcher did not mention testosterone levels as a possible cause, but this larger testosterone study hadn’t been published then.

Among new moms, as many as 1 of 5 develop postnatal depression.

Any new parent will be able to tell you that being a new mom or dad is hard. Usually, sleep-deprivation, breastfeeding, no you-time and inability to adjust to having no control over ones’ time is often mentioned explanations to why new parents seem to have less fun, less energy, have no sex, care less about their looks and overall have quite an unsatisfying life.

This does seem just a little bit spoilt, doesn’t it?

A clash between the modern human’s perceived right to do whatever she wants with her life and the hard work of constant diapering, feeding, and soothing of a new baby. Who had time to whine over no you-time and no sleep when we all had to work around the clock to find food back in earlier times?

Maybe new parents are simply meant to be a bit chubby, calm, caring, and asexual.

Well, obviously that is not the whole story. Nature seems to be doing its best to make sure parents take care of their offspring by making both parents less outgoing, less interested in making new babies, making it easier for them build on weight (hence protecting them from starvation) and making them calmer.

The side effects – a far from exciting sex life, a chubbier body and a mellow mood are far from the perceived ideal of any man, woman or relationship today.

But maybe it is all-natural?

Maybe new parents are simply meant to be a bit chubby, calm, caring, and asexual. And if that’s the case, then why not just be cool about it; even appreciate this era in life for what it is: More love and love handles and less lovemaking. :-)

Maybe not so bad after all..?