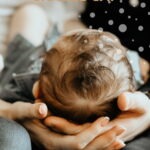 What is cradle cap and how do you get rid of it? Are there ways to prevent it? What causes it?

These are common questions new parents have about the yellowish covering many babies get on their scalp during their first months.

This article provides an indepth guide to cradle cap, what it is, what it looks like, how to get rid of it, and answers to common questions from parents. 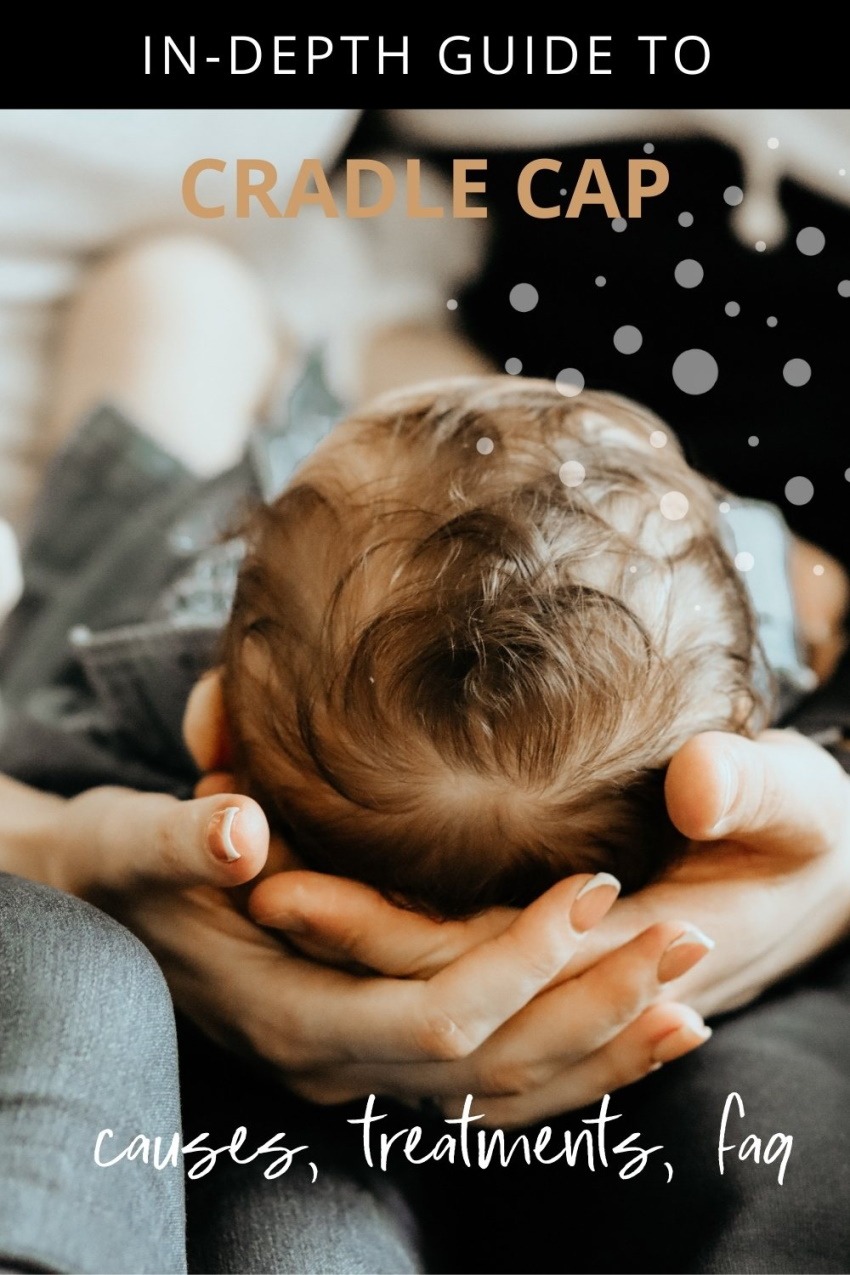 If it looks like your baby has dandruff or some kind of yellowish covering on his or her scalp, forehead and/or eyebrows, it is likely to be cradle cap! With my own first baby, the cradle cap actually grew all the way to her eye brows before I realized what it was. I had never seen cradle cap before.

This article is an indepth guide to what cradle cap really is and how to manage it the best way.

What Is Cradle Cap and For How Long Does It Last?

Cradle cap, also known as infantile seborrheic dermatitis – its medical term, is a common skin condition that concerns many new parents. The first signs may appear as early as two weeks old, but more commonly by age three months.

Some infants, have recurrences throughout the first year of life, but, in most cases, it resolves by age 12 to 24 months. Seborrhea is more common in boys, and it tends to flare during cooler, less humid months.

It may also reappear at the onset of puberty or later in adulthood.

What Are the Signs of Cradle Cap? 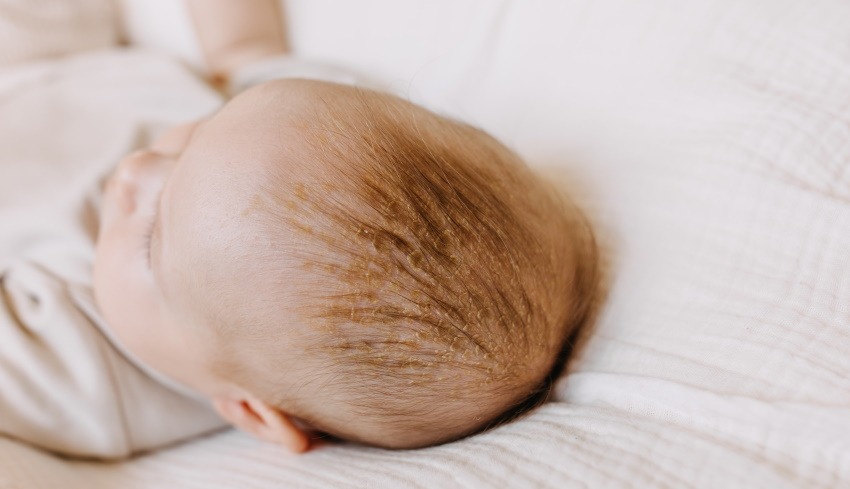 What does cradle cap look like and where is it usually located?

Cradle cap affects areas of the skin that have a high concentration of oil-producing glands. Classic infantile seborrhea is characterized by clusters of oily pimples with yellow flakes of skin. These flakes are very similar to dandruff seen in older children and adults. However, the flakes instead adhere to the hair and scalp, forming a “crust.

Cradle cap typically begins on the scalp, but may progress down the forehead, sides of the face, and around the ears. In moderate to severe cases, it can spread down an infant’s entire body. It is also common to see moist areas of redness in the skin folds of the neck, arms and legs. The skin of the diaper area may also be affected.

Despite its appearance, most infants feel no discomfort.

In contrast, adolescents and adults develop seborrheic dermatitis on other body locations. Along with the scalp and ears, it is commonly seen around the nose and on the chest. Unlike the infantile form, itching is a prominent symptom. In addition, it may be associated with allergies and asthma.

Why do babies get cradle cap?

Although the exact cause of seborrhea is unknown, there are several hypotheses. High levels of maternal hormones passed to the infant at birth are thought to trigger its onset. There also appears to be a genetic predisposition.

An imbalance of the skin microbiome is thought to play a role. A fungus known as Malassezia species is a component of the normal skin flora. This fungus can disrupt the breakdown of oil on the skin surface, and cause an immune reaction that results in seborrhea.

Can Cradle Cap Be Prevented?

There is no specific measure to prevent cradle cap. However, because infantile seborrhea is associated with excessive oil on the skin, it is best to avoid the use of baby oil and similar products. Applying these to affected areas can actually worsen this condition.

What Are the Treatment Options for Cradle Cap? So, how to get rid of cradle cap, preferably for good?

In the majority of cases, cradle cap is a benign condition, and treatment is unnecessary. However, many parents are quite distressed by it, and seek the advice of a healthcare professional.

First-line treatment and home remedy involves loosening the scalp flakes with an emollient ointment, then gently brushing them away. You can use a cradle cap brush, a soft comb, or even a soft tooth brush. This should be followed by shampooing the scalp to remove the flakes and excess oil which can exacerbate infantile seborrhea.

A “no tears” infant shampoo is typically recommended, but dandruff shampoo options may be recommended by a pediatrician.

In many cases, solely managing the affected scalp calms the immune response sufficiently enough to reduce it on other areas of the body. If not, a short course of a low potency hydrocortisone or anti fungal cream may be prescribed to reduce any associated inflammation.

Due to potential side effects, steroid creams should not be applied near the eyes, mouth, or genitals.

Promiseb, a non-steroid cream that specifically treats seborrheic dermatitis, may be prescribed. In clinical trials, however, results when using this cream have been inconsistent.

When Should I Expect To See Cradle Cap?

Infants typically develop seborrheic dermatitis between the ages of two weeks to 12 months. Some infants only have one episode while others have recurrences throughout the first year of life. It is possible for it to reappear during adolescence.

In less frequent cases, cradle cap worsens and persists through early childhood, becoming a condition known as pityriasis amiantacea. Very thick yellow crusts form and adhere to tufts of hair which can be difficult to remove. These crusts can become infected with bacteria, or cause localized hair loss.

Atopic dermatitis, more commonly known as eczema, is a chronic skin condition with symptoms that wax and wane. Approximately 20% of infants and children suffer from this condition, and it typically develops prior to age five.

Eczema is characterized by dry skin that easily becomes irritated. Itching is a primary symptom which promotes scratching and worsening of the irritation. Any area of the body may be affected, but the scalp, face, trunk, and outer surfaces of arms and legs are common locations for infants. It also may be associated with allergies and asthma.

One percent of infants develop psoriasis during their first year of life, and two percent by age two. Unlike cradle cap, itching is a common symptom. Infantile psoriasis is characterized by areas of redness, covered with white or silver skin flakes. Scratching releases these flakes, and causes the underlying skin to bleed. This rash typically affects the face and diaper area.

An immune system defect causes this severe form of seborrheic dermatitis. A yellow, oily rash begins on the scalp and face, then progresses down the body. Unlike common infantile seborrhea, this condition is associated with recurrent diarrhea, frequent infections, and poor weight gain. Symptoms are either present at birth, or develop within the first four weeks of life.

When To Call A Doctor

When an infant’s cradle cap symptoms persist or worsen despite the usual scalp and skin care, it is best to contact your healthcare provider. If symptoms don’t seem consistent with what is expected, the diagnosis may be something else. Worrisome signs include:

Do all infants get cradle cap?

No. Only 10 percent of infants develop cradle cap. It is also seen in seven percent of toddlers under the age of two.

My baby has cradle cap on the eyebrows. What should I do?

It is best not to attempt to treat eyebrow seborrheic dermatitis. Emollients, creams, and shampoos could get in your baby’s eyes, and cause irritation.

If the scalp is affected, you may use an emollient to loosen and brush off the flakes, followed by shampooing. Because this condition is partially immune-mediated, treating the scalp often reduces symptoms elsewhere on the body.

There are a variety of products on the market with manufacturer claims of treating cradle cap. Most have not been evaluated in clinical studies, so their level of efficacy is unclear. Medicated shampoos that are prescribed by a doctor are more likely to improve symptoms.

However, most cases of infant seborrhea self-resolve, and such treatments are unnecessary.

My baby is losing hair because of cradle cap. What can I do?

Hair loss may occur due to hair traction by thicker seborrhea flakes. Softening these areas with an emollient cream, then brushing off the larger flakes can reduce hair breakage and pulling. If this is unsuccessful, speak to a doctor about treatment options.

My toddler/child still has cradle cap. What should I do?

Until age two, cradle cap can still be normal. After this age or if signs of pityariasis amianacea are present, seek the advice of a doctor. Steroid creams or anti-fungal treatments may be recommended.

My infant has both eczema and cradle cap. How do I treat it?

It is not uncommon for eczema and seborrheic dermatitis to coexist. Moisturizers and hydrocortisone creams are the mainstay of eczema treatment. Hydrocortisone creams reduce the inflammation associated with both skin conditions, therefore, improving the skin. However, finding a balance between keeping dry skin moisturized while preventing oiliness on seborrheic skin can be challenging. It is often helpful to consult a pediatrician or dermatologist in these cases.

Is borage oil good for cradle cap? If so, why?

Borage oil is plant-derived, and has anti-inflammatory properties. For example, it is used as an adjunctive treatment for rheumatoid arthritis. Some adults also apply it to areas of skin affected by seborrheic dermatitis. Despite information online regarding its use for cradle cap, few clinical trials have evaluated its safety or efficacy in infants and children.

The idea to use borage oil for cradle cap is, however, not completely lacking research support. There is an old study where Swedish researchers (Tolleson, A., and Frithz. A. 1993. Borage oil: an effective new treatment for infantile seborrheic dermatitis. Brit. J. Dermatol. 129:95.) indicated that they had found a possible cause of cradle cap.

Their research indicated that the condition can be due to an insufficient supply of an essential fatty acid called Gamma-linolenic acid (GLA).

GLA is required for the formation and maintenance of healthy skin cells. The hypothesis in their study is that the infants have an immature enzyme system and are therefore unable to produce sufficient GLA on their own, thus giving rise to the symptoms.

So what does this have to do with borage oil?

Borage oil is a natural oil derived from a plant called Borago officinalis or in English Starflower and borage oil is also sometimes called starflower oil. It is very rich in in GLA. It doesn’t only restore moisture and smoothness to dry and damaged skin, but can also provide relief to people who suffer from chronic skin disorders such as eczema and atopic dermatitis.

The borage oil treatment works by supplying GLA until the infant’s own enzyme system caught up. The study showed that for infants treated with borage oil twice a day in two weeks, the cradle cap disappeared.

However, if the treatment was discontinued, the yellow flakes came back until the babies were around 7 months old.

One old study clearly isn’t much, but there are there are some children’s lotions and ointments available that you can try. (Link to Amazon.) Remember to start slowly and with a small area.

Cradle cap is common is young babies and toddlers. It is benign and most often it will resolve without treatment.

Is Your Baby Teething? 11 Infant Teething Symptoms to Know!

8 Baby Skincare Tips: Less is More for Your Baby’s Skin

Baby Got Knot In Leg After Vaccine? Side Effects, Mitigation and Red Flags