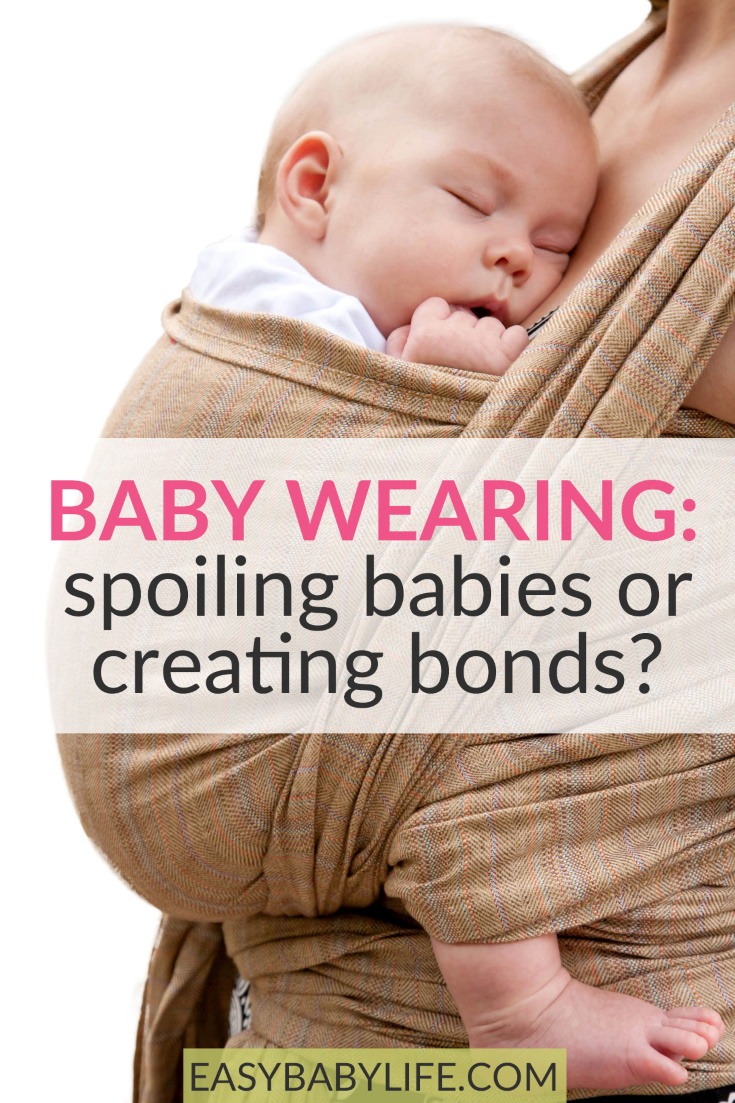 Babywearing is one of the hot topics currently doing the rounds within pregnancy circles and is slowly starting to become fashionable not only with the Moms of today but with Dads too.

But what is babywearing?

Quite simply, babywearing is the decision to carry your baby on your body, keeping him close to you whether that be while he’s sleeping, while you’re hanging out at home, or while you’re out doing your grocery shopping.

However, baby wearing doesn’t need to be exclusive and babywearing parents often chop and change depending on circumstances, sometimes choosing to take Junior out in a pushchair, or letting him nap in a crib.

If you ask your Parents or Grandparents about babywearing, chances are they either haven’t heard of it or opted against it. Although the technique is seen as a modern and somewhat alternative introduction to the parenting world, the practice of carrying children is millions of years old. After all, what did women do before the invention of pushchairs?

In the 18th and 19th Centuries, babywearing was at its peak with the majority of Mothers carrying their children everywhere they went. Back then, it was the expected method of baby transportation and slings were fashioned out of any available materials such as long scarves or even old bed sheets. Fortunately, today we’re almost burdened with sling choice so we don’t need to resort to smelly duvet covers for toting our little ones.

With the invention of the modern stroller in 1848 came the decline of babywearing. Pushchairs became the ‘in’ thing to have; similar to owning the latest iPad or 3D TV today. With the price for this new sought-after item being sky-high, many Mothers ditched the carriers in favor of strollers to demonstrate their wealth; what better way to flaunt your money to the neighbors than to show off the latest ‘must have’ gadget?

Babywearing remains a normal part of everyday life in the developing world where pushchairs aren’t readily available, affordable or even desired. In fact, the introduction of pushchairs into Nairobi, the capital of Kenya in 2004 saw just one sale made in two months! (If you have ever visited Kenya, or any other developing country, you’ll know how impossible a “stroller walk” is – there just aren’t enough flat pavements for a stroller to make any sense at all! There are many ways is which babies and small children can be carried, with an inward-facing, front carrying position being the favorable technique for babywearing newborn infants. This position not only protects the baby’s still floppy head and neck but also acts as a constant, comforting cuddle for the little one. Once a baby can confidently hold up and control its head, many babywearing parents choose to turn their babies around, still keeping them snuggled tightly to their chests but allowing the baby to gaze out at the surroundings.

Older babies can be carried on either Mom’s or Dad’s back or hip, which is ideal for when children become a bit heavier and start to place a bit of strain on the back when worn on the chest. Different types of carriers, wraps and slings are available, many of which are versatile enough to allow for babies to be worn in multiple positions using just the one contraption.

You can check out many different styles here at Amazon.

Advantages of “Wearing” Your Baby

There are many benefits of babywearing for both you and your baby. Let’s start by looking at why so many babies seem so content to be carried around:

And how about the advantages for you? Well, I’m sure any parent would agree that trying to juggle young children, household chores and necessary, relaxing downtime is quite the challenge, especially if you have a baby that isn’t quite ready to nap independently in a crib.

Babywearing leaves two hands free to get on with your everyday life. Whether you wish to do some laundry, prepare dinner or just sit back with a glass of wine, having the freedom to do such things can make a huge difference in how you approach parenthood.

Furthermore, keeping Baby close gives many parents peace of mind, knowing their child is safe and happy right under their noses.

In fact, research has shown that carried babies really are happier babies. A 1986 study looked at 99 newborns and concluded that those who were carried for a minimum of 3 hours per day were 43% less likely to fuss and cry compared to babies who were laid down and transported in pushchairs. Some researchers also believe that the high incidence of infant colic in developed countries may partly be explained by our tendency to not carry our children very much.

Of course, babywearing safety is the first thing that comes to mind when thinking of the disadvantages. Is babywearing safe? Generally, yes. Though it’s always best to use carriers and slings designed specifically for this purpose and to always follow the instructions to make sure your baby is held securely and can’t wriggle free.

And although it may sound obvious, don’t forget to make sure your baby can breathe freely if being held in an inward-facing position against your chest!

With older children being carried on the back, keep an eye on what they’re up to or you may find them picking up all sorts of things behind your back – literally!

There are also some uncertainties surrounding specific types of carriers that are believed to be detrimental to Baby’s hip and spine development. Babywearing research is somewhat limited and so far inconclusive, but there are many babywearing advocates out there who are against a number of branded carriers which they believe do not support the pelvic region correctly and do not mimic the natural baby-holding position.

There is also some concern about the pressure put on the back and shoulders for the adult during long-term carrying, especially when babywearing older babies. Although carriers and slings are designed to keep any discomfort to a minimum, there is inevitably always going to be more strain than if a baby was transported in a pushchair.

Babywearing is one of the most controversial topics when it comes to baby parenting, probably only coming second to the breastfeeding/formula feeding debate. While babywearing is gaining huge popularity with young families today, the older generation may have differing views, and may not be afraid to express them!

As we looked at, the invention of the modern pushchair led to a huge decline in babywearing as Mothers wanted only the best for their children. The stroller became a status symbol as only the upper-class population could afford such luxury. As such, babywearing also became a status symbol, but not in the same way. Babywearing became something only the poor did, and to be seen carrying children was a sign that these women could not afford better.

The older generation, whether it be our Mothers, Grandmothers, Great Grandmothers, or simply the old lady who you always seem to run into at the bus stop, where more than likely to have been brought up with this lingering idea that babywearing was for the lower classes.

The introduction of the pushchair also encouraged many parents to distance themselves somewhat from their children simply because they had somewhere safe to put them down and being able to do so was a bit novel. It was not unheard of for babies to spend the first three months of their existence almost entirely in a pushchair or carrycot. As a result, babywearing today has been categorized as ‘attachment parenting’.

Attachment parenting is a method that focuses on creating strong bonds with our children through ongoing emotional and physical contact. The idea is that being close to your baby for the majority of the time allows you to really get to know them and means you are capable of responding to their needs adequately and efficiently. Being at your baby’s beck and call rather than practicing ‘controlled crying’, a parenting technique popular with the older generation that involves allowing a baby to cry for set periods of time (assuming they are not in any obvious pain) to teach them to soothe themselves, has deemed babywearing a method which spoils our children by the older generation. (You can learn more about attachment parenting for babies here.)

Does babywearing really spoil our children, or does it simply create strong bonds? A study conducted in 1990 found that Mothers who carried their babies were more in tune with their children’s needs during the first three months of life compared to those who used baby seats and pushchairs. The same Mothers were found to have a stronger emotional bond with their offspring when examined 12 months later.

In 2004, a Washington Post journalist visited Nairobi in Africa to see how cultural differences affected views of babywearing. Mothers in this part of the world don’t have the luxury of paid maternity leave or of ignoring the chores, after all, cleanliness is often the key to life in many parts of the continent. Many women return to their jobs in the markets or to collecting water for the family almost immediately following birth. Carrying their babies on their bodies while they undertake these tasks is simply second nature.

Irene Wambui, a 24-year-old mother who was interviewed by the publication, likened babies in pushchairs to pets and was against the idea of children sitting ‘like lumps’ all day long. A local psychiatrist agreed, stating that ‘the pram is the ultimate in pushing the baby away from you’. The parents in Nairobi who were interviewed typically had an ‘if it’s not broken, why fix it?’ attitude to babywearing, with one woman commenting that “we can’t stop being African women just because we are suddenly thrust into the modern world”.

You don’t have to take my words for the benefits of babywearing. In the below video, Learn about the 7 B’s of attachment parenting, including babywearing!

The 7 B's of Attachment Parenting

More about bonding with Baby

You can also learn a lot more about attachment parenting and find more inspiration through the following wonderful books:

Why Is Baby Grabbing Their Private Parts? 3 Reasons to Know!

5 Really Helpful Tips If Baby Screams When Dad Holds Him

My baby is shaking head!? Can this be normal?